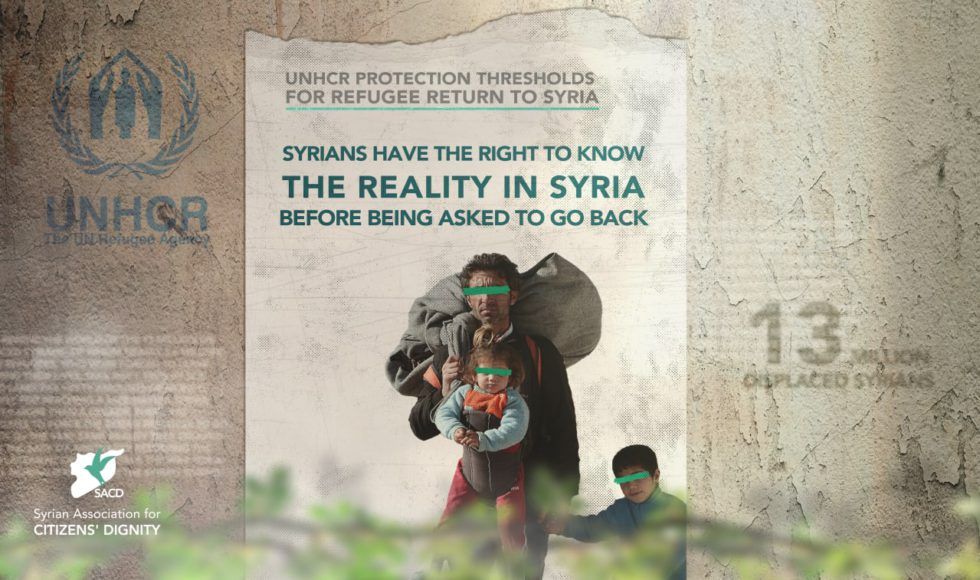 A critical component of safe, dignified and voluntary return is access to reliable information about whether it is safe to return. This information helps the displaced understand whether their return conditions have been met, as well as the process involved. In particular, it might help highlight any inconsistencies between the process and their legal rights as refugees and IDPs to return home without fear of harassment or targeting. Previous SACD research shows that a staggering 87 per cent of surveyed Syrian refugees were confident that they had enough information through informal channels to judge whether their return conditions had been met in their areas of origin; informal sources such as family and media were their main sources of information. However, further questioning revealed they were unaware of critical and potentially life-threatening components of the regime’s requirements for return.

A closer examination of one key mechanism used by the regime in dealing with refugees who are considering returning now shows that their sense of being informed about the conditions on the ground is utterly misguided. SACD surveys revealed a potentially dangerous lack of real information from those supposed to be informing them on all aspects of return conditions, including the UNHCR.

People who wish to return to Assad-held areas must now sign a “reconciliation document” in order to return—particularly those who left the country without official documents or permission, as is the case for many refugees. The content of the document, which must be lodged with the Syrian embassy in the host country before being allowed to return, speaks of “addressing the situation of Syrians who left the country illegally, due to the current circumstances and (…) settling their military conscription and other security issues, regardless of the circumstances that compelled them to leave”. Signing the document amounts to a confession of having committed a legal violation by leaving the country.

Some 80 per cent of people surveyed by SACD stated they did not have any meaningful information about the content of this document. Of the 20 per cent who did have some information about it, most believed it was tantamount to an admission of committing crimes against the state. When asked if they thought that such an admission could later be used against them in criminal proceedings—either by raising a personal lawsuit or raising a public right claim—nearly 54 per cent reported that they were aware of the possibility of being prosecuted under the reconciliation document; 46 per cent indicated that they did not know if it was possible to be prosecuted according to this document.

Study participants who wish to return were asked about their willingness to sign the reconciliation document, and 98 per cent of those wishing to return confirmed that they would not sign, and that this document would be an obstacle to their return.

This practice is seen as a major obstacle to return, epitomising the regime’s continued subjugation of potential returnees. The series of responses about the reconciliation process highlights another worrying trend. Despite 87 per cent of people stating that they had adequate information about returning and the conditions for return, nearly the same percentage had no information about the “reconciliation process”. When given the information during the survey, they then said this would present a major barrier to return. These responses make it clear that refugees and IDPs do not currently have adequate information about the conditions or returns processes and their potential to violate both their rights as IDPs and refugees, and to risk their personal security and freedom in the future.

UNHCR’s reporting tools, designed to provide granular information and analysis of obstacles and conditions for return, and identifying the necessary actions to address them, simply do not exist. Its monthly Operational Update, itself geared towards member states and donors, sets out various sets of numbers, including those of “spontaneous returns,” different ways that the agency is helping the refugees and returnees, with a heavy emphasis on the donor-driven language of “impact” and not a single mention of specific obstacles to return or reality facing those forced to return due to difficult living conditions or anti-refugees’ sentiment in host countries.

It speaks of gathering information at the community level to inform on gaps in infrastructure and services, and “other recent developments” that may have an impact on Syrians’ return, but such document is not publicly available or accessible by the displaced Syrians. It indicates that such a document compiles laws that Assad’s regime has passed to supposedly “facilitate” return without monitoring their implementation or impact on refugees’ intentions. It makes no mention of the series of discriminatory laws and decrees passed by the regime aiming to strip the displaced Syrians of their properties and tenancy rights, such as Law 10 or Law 6.

Most importantly, the Operational Update nor any of the other UNHCR’s public documents does not make a single mention of the security risks for returnees or its lack of access to monitor and report on its own protection thresholds in the majority of Assad-held areas.

In addition to this consistent failure to inform the displaced people through its own public communication of the reality in Assad-held areas, UNHCR’s own communication assets such as social media accounts or statements by senior officials are sending mixed messages which give an impression that it is safe to return, thus directly encouraging premature and uninformed returns, which often lead to persecution and suffering of returnees.

A number of such cases were reported on by SACD, including during the UNHCR’s head Filippo Grandi’s visit to Eastern Ghouta or meetings with the Syrian regime officials in Damascus. Such repeated messaging of this kind on similar occasions, which consistently fails to address the security threats facing potential returnees, speaks of a systematic approach which paints a deeply misleading picture of the reality in Syria. This speaks of UNHCR’s failure to fulfil the Syrian refugees’ right to know about the conditions facing them in several key areas:

The UNHCR must, therefore, cease the misleading messaging on the “improving security situation” for returnees, and improve communication, information, and counselling with Syria’s displaced to ensure they are aware of all factors and conditions that might impact their returns decisions, including information about how current conditions and returns procedures impact their rights, and make this communication approach an integral part of future media campaigns.

Below is  the detailed breakdown of descriptions of protection thresholds not being met.