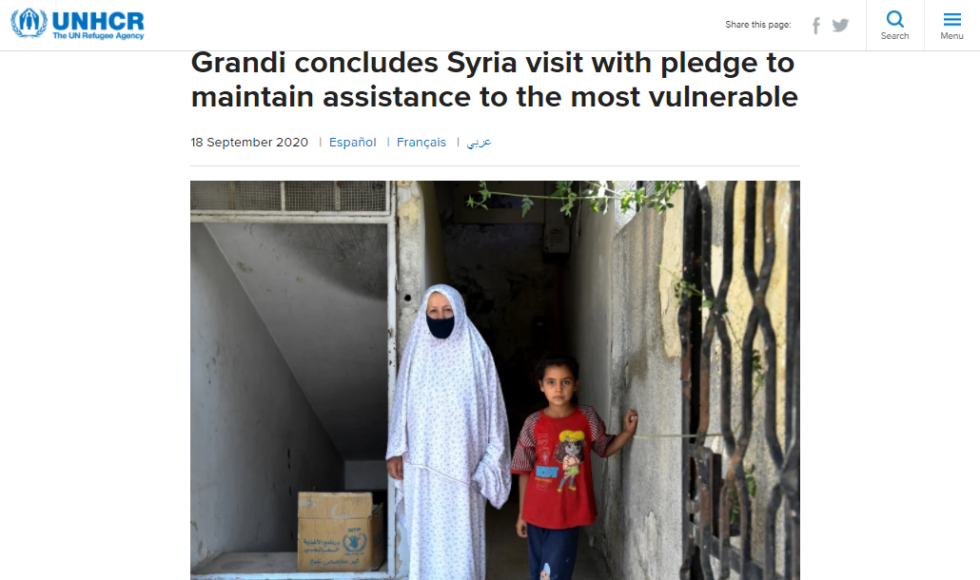 The recent social media posts showing senior UNHCR officials walking through the rubble of  Syrian cities, supposedly to illustrate how conditions are harsh but improving, are deeply misleading and dangerous for the Syrian displaced who are likely to face forcible recruitment into Assad’s army, detention, and in some cases enforced disappearance if they try to return home. Even after the outcry of other humanitarian groups and UNHCR’s head Filippo Grandi openly admitting that UNHCR has no access to all areas of the country to ensure that returnees are safe, the agency narrative has not changed.

If this opening paragraph sounds familiar, it is because it is taken from a text we wrote in March 2019. Unfortunately, more than a year later and with over one million Syrians displaced since then, the misleading rhetoric of the UNHCR leadership on security situation awaiting potential returnees has not changed.

The messaging directed at displaced Syrians during the latest such visit by the UNHCR chief Filippo Grandi, this time to Eastern Ghouta, speaks of “people returning and the security situation becoming more stable.” UNHCR published videos of Grandi visiting schools and meeting with returnees whose problems seem to be solely focused on humanitarian issues such as repairs to their homes and improvement in aid and services. This messaging, which omits even a mention of the security threats facing the people in Eastern Ghouta, is in direct conflict with the reality on the ground and it may put people in danger, especially with the increasingly difficult situation in which Syrian refugees in Lebanon and elsewhere find themselves.

And these are some of the illustrations of the “the security situation becoming more stable” in Eastern Ghouta only during the last three months, as claimed by Grandi.

On Thursday, June 11, 2020, Syrian Regime forces carried out a campaign of raids and arrests in Douma city in the Eastern Ghouta, with SNHR documenting the arrest of 12 civilians, taking them to an undisclosed location. It is extremely important to note that such arrests regularly become enforced disappearances as the arrestees are usually not heard from again.

On Monday, July 13, 2020, Syrian Regime forces carried out a campaign of raids and arrests in the neighborhoods of al Kurneish, al Qowatli, Khourshid, and Halab al Qadima of Douma city, Eastern Ghouta, with 17 civilians arrested and taken to an undisclosed location.

On Friday, July 3, 2020, Syrian Regime forces carried out a campaign of arrests at one of the regime’s checkpoints at the entrance of al Yarmouk Camp, south of Damascus city. SNHR documented the arrest of six civilians, including one women, who were taken to an undisclosed location.

On Monday, August 10, 2020, personnel from the Syrian regime’s Military Security Force arrested two nurses working at the Hamouriya Medical Center, in Hamouriya town in the Eastern Ghouta, taking them to an undisclosed location.

Muhannad Kabtoul, from al Hama village in the Western Ghouta, was arrested by Syrian Regime forces on Sunday, August 9, in a raid on his home on charges of writing anti-Syrian regime graffiti on walls, and taken to an undisclosed location.

Fadi al Mbayyed, from Harasta city in the Eastern Ghouta, was arrested by Syrian Regime forces on Tuesday, August 11, in a raid on his real estate office in Harasta city, and taken to an undisclosed location.

In July, the Syrian Regime Security forces carried out an arrest campaign, taking more than 40 young people from the city of Douma in Eastern Ghouta.

Sowt al-Asima’s sources said that patrols belonging to the Douma City Police Department participated in the arrests, noting that the latter targeted a number of those wanted for security reasons, as well as others who avoided joining the regime’s army to perform mandatory and backup military service.

According to these sources, the patrols transferred all the detainees to the building of the State Security Branch in Douma, so that those who avoided military service in the past could be handed over to the military police and be forcibly recruited.

And these are just the illustrative example of what is a continuing and systemic repression by the Syrian Regime targeting the people of Eastern Ghouta. SNHR has documented 89 individuals who have been forcibly disappeared in Eastern Ghouta since the beginning of this year, with dozens of youth forcibly recruited into the regime’s military, especially during the onslaught on Idlib, to be sent to the deadliest frontlines in Idlib and north Aleppo.

It is crucially important to note that such repression further instils the reluctance of victims’ families to cooperate and reveal or provide details of any information on their family members’ arrest, even confidentially, more especially if the arrested individual is female, due to a well-founded fear still prevalent in Syrian society that being discovered doing so would result in more torture and further danger for their loved ones and themselves. Instead, families try to negotiate with security forces which usually blackmail these families and demand cash payments, effectively ransoms, that can amount to thousands of dollars in some cases.

Misleading messages on returns to Ghouta

The wilful exclusion of any reference to the ongoing arbitrary arrests, enforced disappearances and harassment of Syrians in Assad-held areas, and Eastern Ghouta – the site of Grandi’s visit – in particular, cannot  be interpreted as anything  but a blatant failure of the UNHCR’s mandate to “communicate accurate and timely information to potential returnees about conditions, insecurity, and access limitations, leading to ill-informed returns decisions which therefore cannot be considered to be voluntary.“

“The security situation is far from improving, and the regime is still arresting many people even if they were not in Ghouta during the siege. There are still many young men who are afraid of forced recruitment, as they are arrested to be recruited without prior notice. Many have withdrawn to live in remote areas, without the basic services, fearing forced conscription,” says Muaz Bwidani, a trustee of the Syrian Association for Citizen Dignity, himself displaced from Douma in 2018.

Bwidani sees the UNHCR’s public relations effort around Grandi’s visit as deeply misleading. “The handful of families that Grandi has put forward as example of safe return are people who lived in Damascus area and had no security issues with the regime. The real picture is that many residents of Ghouta are seeking to leave to the northern Syria due to the repression, and those who have the financial means to bribe the regime security forces indeed leave whenever they get a chance.”

“Return is virtually impossible for a huge majority of people of Ghouta. The security reasons are obvious, but the regime also continues to punish this area for its former loyalty to the opposition. There are a number of areas that the regime does not allow the displaced to return to, such as parts of Daryea – Al Marg region – Western Harasta. Even the basic services are problematic and used against the residents. The regime requires residents of the area to pay bills for services such as electricity and water for the period in which the area was out of its control (seven years) even though there were no services at that time. This is a huge, punishing burden for anyone who would be forced to return and is used deliberately, just like in other areas formerly held by the opposition,” says Bwidani.

In light of this information from Eastern Ghouta, Grandi’s statements and UNHCR’s messaging on return becomes even more problematic, although these concerns are not new. UNHCR’s conduct has been a recurring theme in SACD’s recent meetings with diplomats from the leading EU countries and the United States.

UNHCR must reform its work on return

Last year, SACD issued an analysis of the areas in which the UNHCR is failing to act in accordance with its own strategies or its duty of care to the displaced Syrians in a number of ways, which include:

“This is an analysis of UNHCR’s own information and strategic documents, which was complemented with SACD’s research documenting a stark reality awaiting returnees, which UNHCR is completely failing to report on. These findings highlight the danger in the current gaps in UNHCR’s approach, which have real and dire consequences for displaced Syrians,” said Zaid Mastou, a SACD trustee.

In February 2018, the UNHCR released its ‘Comprehensive Protection Solutions Strategy: Protection thresholds and parameters for refugee return in Syria (CPSS)’ which promulgates that UNHCR’s engagement on return during Phase 1 is limited to planning, monitoring, counselling, advocacy, and ongoing analysis of obstacles to and conditions necessary for return, and identifying the necessary actions to address them.

However, UNHCR’s reporting tools, designed to provide granular information and analysis of obstacles and conditions for return, and identifying the necessary actions to address them, simply do not exist. Most importantly, the Operational Update nor any of the other UNHCR’s public documents does not make a single mention of the security risks for returnees or its lack of access to monitor and report on its own protection thresholds in the majority of Assad-held areas.

The latest incident with the messaging around the Grandi’s visit to Eastern Ghouta shows that UNHCR has not changed its ways, on the contrary: repeated messaging of this kind by senior UN officials on similar occasions, which consistently fails to address the security threats facing potential returnees, speaks of a systematic approach which paints a deeply misleading picture of the reality in Syria. As a result, the SACD will redouble its effort to mobilize the donor countries to strengthen the oversight of the work of UNHCR and include representation and participation of the displaced Syrians in such oversight mechanisms.

As we have repeatedly stated, the UNHCR must undertake returns work based on the priorities of refugees and IDPs’ concerns and conditions; work on security – as amply illustrated by the findings of our previous reports – should take the highest priority. UNHCR must accept that increasing service provision as an incentive to return does not address the main concerns of Syria’s displaced and serves to incentivize unsafe and premature returns.

The displaced Syrians clearly do not have sufficient information on some of the crucial aspects of the security conditions when considering possible return, which can be seen as a failure of the UNHCR to deliver on one of the key elements of its mandate. The UNHCR must, therefore, cease the misleading messaging on the “improving security situation” for returnees, and improve communication, information, and counselling with Syria’s displaced to ensure they are aware of all factors and conditions that might impact their returns decisions, including information about how current conditions and returns procedures impact their rights, and make this communication approach an integral part of future media campaigns.