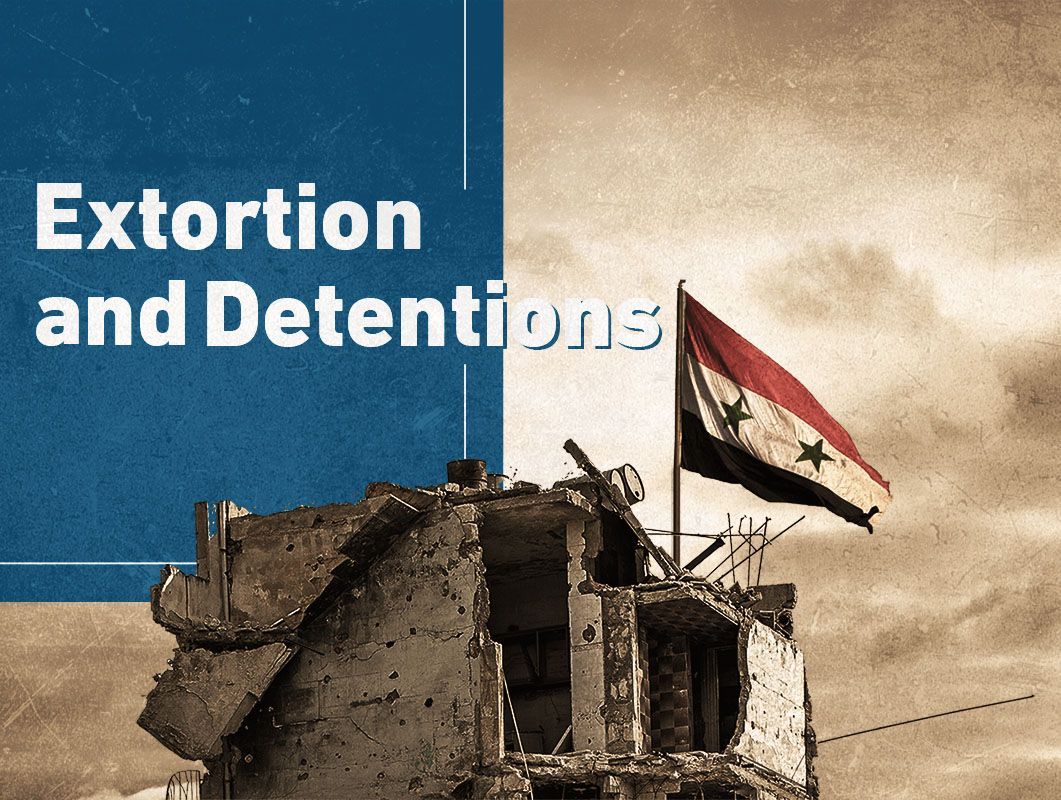 Detainees and their desperate families face uncertainty and are forced to pay bribes and extorted.

The Syrian regime continues its repressive policy of arbitrary detention and arrest in most areas under its control (Figure 12). This includes arresting individuals who signed personal settlement documents  (reconciliation agreements) in reconciliation areas and elsewhere. Arrests also target individuals who criticize the regime or express their opinions about its policies or declining living conditions. The Syrian Network for Human Rights documented at least 908 cases of arbitrary arrests and detention in 2020, carried out by regime security forces.[1]

This particular survey shows that 40 per cent of respondents confirmed that at least one of their relatives was arbitrarily arrested between 2011 and 2020. This demonstrates the widespread impact and relevance of the detainee issue for Syrians who still hope to see their loved ones released, and information provided on the fate of those who have been detained or forcefully disappeared.

Note: figure shows participants’ responses to the question “Have any of your relatives been arbitrarily arrested?”

Nearly one-fifth (19 per cent) of the arrests were against people who have previously been covered by some kind of amnesty laws and decrees issued by the regime (Figure 13). Roughly a quarter (26 per cent) of those arrested had signed personal or collective reconciliation agreements, which are supposed to indicate an even stronger promise/guarantee by the regime (Figure 14).

Note: figure shows participants’ responses to the question “Were the arrested persons covered by any kind of amnesty?”

Note: figure shows participants’ responses to the question “Did the arrested person sign a personal reconciliation?”

These results confirm that the regime does not respect its own agreements and decrees, and that it is very difficult for Syrians living in regime-controlled areas (or planning to return) to make an informed decision about their future, demonstrating again the lack of any real guarantees. The percentage of arrested people amongst participants since the beginning of the conflict varies considerably, but it confirms that the trend is still ongoing (Figure 15). There was a noticeable increase in 2019 and 2020 (up to September) compared to 2018, despite the fact that the regime was launching major military offensives on Idlib and Aleppo in 2018 and gaining more territory.

A major reason for the drop in the percentage of arrested people or relatives over the last 10 years is that the regime conducted a very aggressive and discriminatory arrest campaign in the first few years that targeted of dissidents and activists in areas under regime control, forcing everyone who opposes the regime to flee these areas. The vast majority of activists in regime-controlled areas have been killed, arrested or forced to flee. In parallel to these practices, as the regime gained more territory by force, Syrians generally fled these areas, especially those who believed they were wanted by the regime, which minimized the chance of new arrests of people seen anti-regime. Once the regime “ran out” of opposition sympathizers it turned on its loyalists and Syrians who entered “reconciliation agreements”. These facts help explain why security conditions and the fear of detention are amongst the biggest deterrents to the return of Syrians to regime-controlled areas. The survey also showed that 82 per cent of the arrests of participants or their relatives were without a court order, despite the fact that Article 53 of Syria’s current constitution, issued in 2012 under Decree 94, prohibits arbitrary detention and torture (Figure 16).

This unsettling figure demonstrates that it is difficult to secure incremental improvements and policy changes in the security and justice sectors when amnesty decrees and reconciliation agreements are followed by strong regression to draconian measures and behavior. Most of the regime’s security-related activities are taking place outside any legal framework. These findings confirm that a complete security reform sector is needed.

Figure 16. Arrests with a court order

Note: figure shows participants’ responses to the question “Were your relatives arrested with a court order?”

Over half (53 per cent) of the participants’ detained relatives are being held in unknown locations (Figure 17). Such detainees cannot be visited, and no information about their cases (or the reasons for their arrest) can be obtained. This violates international laws and conventions that guarantee the rights of detainees. For example, the International Convention[1] on the Protection of All Persons from Enforced Disappearance states: “Ensure that a person deprived of his/her liberty is imprisoned only in an officially recognized and controlled place”. It also stipulates the importance of: “Ensuring that every person deprived of liberty has permission to contact his/her family, lawyer or any other person of his choice, and receive their visit in accordance with the conditions stipulated in the law.”

Figure 17. Detentions, by whether place of detention is known

Note: figure shows participants’ responses to the question “Is the place of detention known?”

The cases of holding detainees in unknown locations also present an irregular distribution over the last 10 years, but it seems to be more flagrant in the early years of the conflict, when only 21 per cent of detainees were held in known locations (Figure 18). Despite the decline in the percentage of detainees held in unknown locations to an average of one-third in recent years, it is still a devastating percentage and entails systematic violations of basic human rights and increases the fear factor among Syrians.

Figure 18. Detentions, by whether place of detention is known and year of arrest

Note: figure shows participants’ responses to the question “Is the place of detention known (by year of arrest)?”

The gravity of the arrest issue is further exacerbated by denying the basic rights of the detainees and their relatives. Figure 19 illustrates that a large majority of respondents (71 per cent) cannot visit their detained relative.

Note: figure shows participants’ responses to the question “Could you visit your detained relative?”

Arrests have also become the starting point for a considerable number of extortion cases. Many arrests are carried out without any legal order, as mentioned above, and without apparent reason. In many cases the arrests are carried out by militias or agents without proper identification. As a result, a considerable percentage of the detainee’s families do not know who made the arrest. These practices make detainees’ families more vulnerable to extortion by official and non-official parties and individuals. Detainees’ families, out of desperation, are usually willing to pay bribes to find out where their relative has been taken, and to try to visit them or communicate with them. The survey found that 72 per cent of respondents with detained relatives had paid (or were asked to pay) money to find out where the arrested person was (Figure 20). Extortion of detainees’ relatives is carried out systematically

Figure 20. Percentage of detainees' families that paid bribes to locate them

Note: figure shows participants’ responses to the question “Did you have to pay in order to find out the whereabouts of an arrested relative?”

The same type of extortion applies to releasing detainees: 60 per cent of the people interviewed paid (or were asked to pay) to release the detained person.

Figure 21. Percentage of detainees' families that paid bribes to release them

Note: figure shows participants’ responses to the question “Have you been asked, or have you paid money to have the detained relative released?”

It is clear beyond any doubt that there is systemic abuse of detainees’ rights, and that militias and officials linked to the regime make illegal arrests to extort money from detainees’ families as a source of income. These practices are further supported by a network of lawyers, judges, heads of security branches and militias operating in regime-controlled territory, which completes the circle of extortion and power abuse.