Between Hammer and Anvil 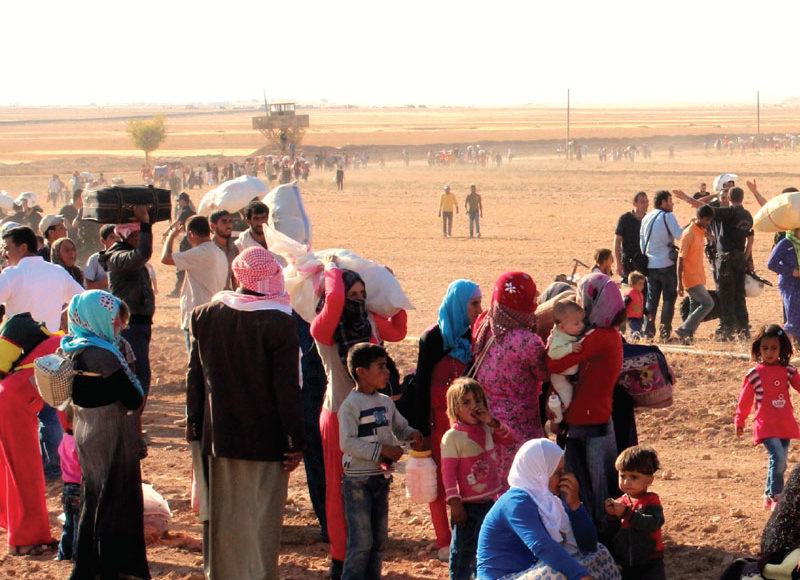 This report examines a number of reasons why some of Syrian refugees have returned home, despite the high risks involved, including the longevity of the crisis, the deteriorating living conditions in displacement, and the legal and security pressures they face. Some countries and international organizations have cited the number of returning refugees as proof that it is safe for them to go home, and to justify an immediate (coerced, and in some cases forced) repatriation of all Syrian refugees. Assad’s regime, Russia and some international agencies have disseminated inaccurate or out-of-context figures about refugee returns to regime-held areas. These figures do not reflect essential details about why these individuals have decided to return.

The United Nations (UN) estimated that 8,070 refugees returned to Syria from Jordan during the first 9 months of the Russian initiative1 to repatriate refugees (July 2018 to March 2019), an initiative that was closer to a forced return for the refugees and did not include any credible safety guarantees or monitoring mechanisms. This number is very close to the Jordanian government’s estimates. The Russian government, however, has declared that 87,000 refugees returned from Jordan during this time. The UN has also estimated that 14,496 Syrian refugees returned home from Lebanon in the same period, compared with the Russian government estimate of 55,000 and the Lebanese General Directorate of Security figure of 100,0002.

Yet even according to the Russian estimates, only 142,000 refugees returned to Syria from Lebanon and Jordan during this period, which accounts for only 2.7 per cent of the registered refugees at the start of the Russian initiative – which is far below Russian expectations. Settling this issue is Moscow’s main concern, as it is a key element of its effort to demonstrate the stability of areas under Assad’s control, which should imply that the only obstacle to the full return of refugees is the devastation of residential areas. According to the Russian strategy, the European Union should finance the reconstruction, which should ultimately lead to the return of the remaining displaced Syrians – and the complete legitimization of a Russian victory in Syria. In this scenario, the regime and its Russian allies would guarantee refugees’ rights, safety and dignity. From Russia’s point of view, the return of refugees and Internally Displaced People (IDPs) to regime-held areas under any conditions and without any gurantees is a key element for a political solution that would be granted international legitimacy, and that would consequently make the idea of elections plausible, but most importantly it would allow the flow of reconstruction funds to the Syrian Regime.
The reality is considerably different. All international political initiatives that have been launched to date have failed to establish a solid basis for a process that responds to refugees’ concerns regarding what constitutes the minimum conditions for a voluntary, safe and dignified return, as guaranteed under international law. There is also an acute lack of reliable and verified information available to refugees and IDPs to allow them to make an informed decision about whether to return under the current circumstances. There is a similar gap in the knowledge and information available to international policy makers on the motivations and experiences of people who have returned to Assad-held areas without the minimum conditions in place.

This is the second report in a series of thematic reports focusing on returning parameters that seeks to fill this gap. The Data Collection and Analysis Unit of the Syrian Association for Citizens’ Dignity (SACD)is conducting this ongoing study to investigate the reasons why Syrian refugees and IDPs have returned to regime-held areas despite the lack of minimum conditions, and the spread of reports and news about systematic human rights violations.

The researchers interviewed 112 returnees to regime-held areas, some of whom left again after they returned. The survey respondents represent a wide spectrum of Syrian society from different demographic segments and geographical regions. The first report in the series, Vengeance, Repression and Fear: Reality behind Assad’s Promises to Displaced Syrians (October 2019), interviewed a different set of 165 people.

The responses of the returnees compiled in this study illustrate the impossibility of voluntary mass returns in the current circumstances. An overwhelming majority of them are disappointed at the lack of sincerity of the promises made by the regime and its allies, in addition to the lack of reliable and comprehensive information from the international agencies operating in Syria, including the UN High Commissioner for Refugees.

This report confirms the conclusion of the first report with a new set of respondents: the majority of those who have returned to Assad-held areas have regretted their decision and are actively looking for a way to leave again. One of the key findings of this report confirms that the returnees lacked the necessary information to make an informed decision about returning, and that the majority of the returns were motivated by the harsh living conditions and pressures in the displacement areas.