People of Rukban Camp again face the dilemma: Starve in the desert or die in Assad detentions 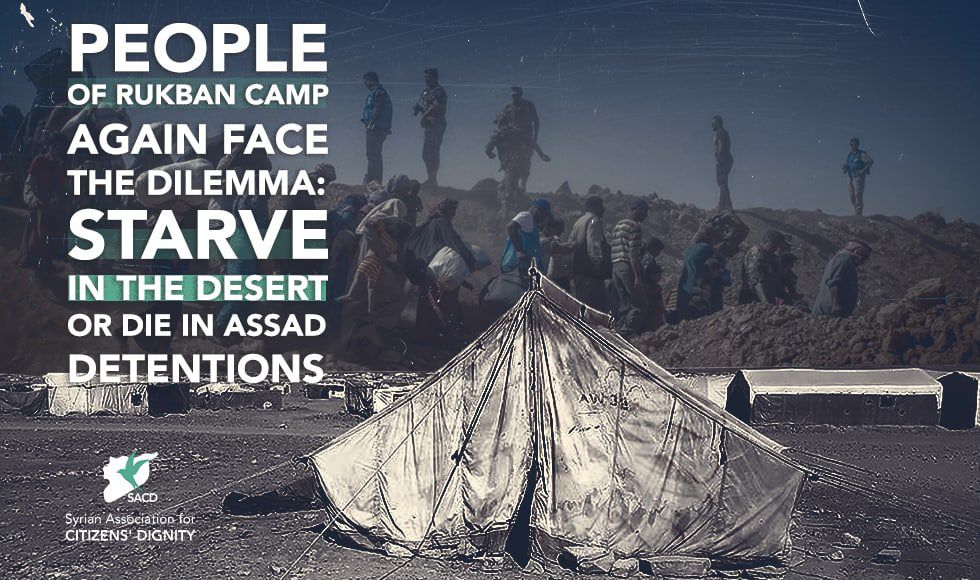 People of Rukban Camp again face the dilemma: Starve in the desert or die in Assad detentions

Idlib, 22 April 2022 – The Syrian Association for Citizens’ Dignity (SACD) strongly condemns latest reports of displaced Syrians in the besieged Rukban camp being forced to make the bitter choice of returning to Assad-held areas, due to the harsh living conditions in the camp as a result of deprivation from humanitarian assistance.

It is deplorable that more than seven thousand displaced Syrians in Rukban camp are left in a barren desert enduing harsh weather conditions without food or medicine. The latest reports from Rukban indicate that in the last few days nearly 70 people, mostly women and children, were forced to return to Assad-held areas, without any security guarantees. The extreme shortage in basic food items and the migration of cattle have increased the food insecurity in the camp and left the people in a dire situation forced to head to an unknown fate in Assad-regime areas.

The fate of those forced to return to Assad-held areas from Rukban is uncertain. When similar pressure was exerted on people trapped in Rukban to force them to return, SACD confirmed that Syrian security services have arrested 174 people who were taken to the so-called IDP shelters in Homs and transferred to “terrorism courts,” despite having previously received security clearances from the regime. All the arrested youth and men received guarantees and commitments from the regime and Russia to receive a “personal settlement” which would protect them from persecution and forced recruitment. Some of the detained returnees have been disappeared and their whereabouts are still unknown.

This process has been taking place in reconciliation centers across Assad-held parts of Syria and returnees from Rukban were forced to check their suitability for this process in the eyes of regime’s security services in advance of leaving the camp. Yet this so-called security clearance did not protect them from arbitrary detention and forced disappearance.

The United Nations Office in Syria and the Syrian Arab Red Crescent have been involved as well in plans to transfer people from Rukban to Assad-held areas, despite all the risks such move will have on the lives of returnees.

UN Office in Syria and UNHCR specifically are responsible and accountable to inform Syrians of the reality upon return, rather than acting as a complicit to premature and unsafe return. So far, instead of fulfilling this responsibility we have seen repeated cases of returnees being misled about the reality on the ground with inaccurate information, but also by being directly involved in such returns by sending empty trucks to transfer people to regime-controlled areas in Homs.

There is no safe environment anywhere in Syria, particularly in areas under Assad control. Displaced Syrians have the right to be provided with a decent, safe life until the right conditions for a safe, voluntary and dignified return are met in a safe environment with robust international guarantees.

Russia cannot be a guarantor of any peace or safe return, and people of Rukban and other displaced Syrians cannot simply be handed over to the criminal forces which have displaced them and killed their loved ones. Imagine if Ukrainians were forced to return from refugee camps in Poland to areas under Russian control in Mariupol or other places they were displaced from by Russia. The crimes and atrocities committed by Russia in Syria are not lesser that its crimes in Ukraine. Syrian lives are not less worthy than Ukrainian. The normalization of the Syrian regime and the forced and premature return of displaced Syrians will only serve the interests of Russia, as it seeks to cement its military gains and reap the fruit of its intervention in Syria.

Again, we call on the UN and the Syrian Red Crescent to provide humanitarian aid to the people of Rukban, to monitor and report on the fate of those forced to return into the hands of the Syrian regime and Russia, and to respect people’s right to a voluntary, safe and dignified return instead of facilitating forced return into uncertain fate.