Who is UNHCR serving in Syria? 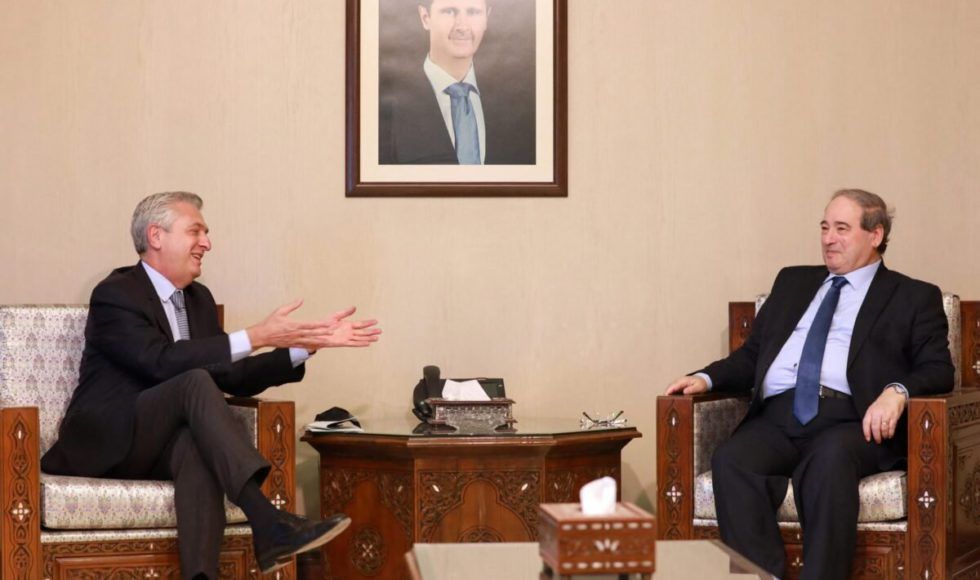 Who is UNHCR serving in Syria?

UNHCR’s head Fillipo Grandi made scandalous statements during his latest mission to Syria. In the first he openly admitted that UNHCR is coordinating with the regime of Bashar al Assad on the return of displaced Syrians and the creation of conditions for return of Syrian refugees from abroad. In the second he went even further, explicitly placing the faith in the Syrian regime to ensure security for returnees.

These statements came during the week in which the Syrian regime, with the help of its Russian allies, committed yet another massacre of Syrian civilians in north-west Syria. In the city of Ariha, a busy market, adjacent to the road bustling with schoolchildren on their morning commute to school and people shopping for food, was attacked with rocket fire. Thirteen people died on the spot, including four children and their teacher, while scores have been wounded, some critically.

On the same day, the Human Right Watch issued a report which brought more testimonies from returnees who speak of enforced disappearance, torture, arbitrary arrest and killings of those who were misled into thinking they would be safe to return, or simply had no other choice due to dire conditions in displacement. The report came following a recent similar documentation effort by the Amnesty International, and multiple reports breaking ground on this reality from the Syrian Association for Citizens’ Dignity, Syrian Network for Human Rights and others.

How was it possible then for Filippo Grandi to say such scandalous things in a blatant dereliction of duty of care to the displaced Syrians, the constituency that UNHCR is tasked with protecting and supporting? For perspective, imagine the former head of UNHCR Sadako Ogata meeting Radovan Karadzic in August 1995, as the Bosnian Serb forces carried out the infamous massacre at the Markale market in Sarajevo, and issuing a statement how she is coordinating the return of displaced Bosnians with Karadzic and how his forces are to ensure their security. Impossible to imagine, of course, as the response of the international community to that massacre was to unleash a bombardment on Bosnian Serb forces which ultimately forced them to sign the Dayton Peace Agreement.

We are under no illusions that the international community will in a similar manner come to protect and aid Syrians suffering atrocities from the Assad’s regime. Nor that this is the first time the UNHCR has blatantly failed at its duty to properly inform the Syrian refugees of the reality awaiting them if they return to Assad-held areas. We repeatedly warned about such failures.

As far back as March 2019, we reported on the UNHCR’s misleading presentation of numbers of returnees to obscure the ongoing displacement perpetrated by the Syrian regime. In November of 2019, we issued a briefing documenting how the UNHCR is failing to act in accordance with its own strategies or its duty of care to the displaced Syrians in a number of ways, which include:

We are certainly aware of the UNHCR and other UN agencies having to “toe the line” in order to continue operating in the areas held by the Syrian regime. We are about to publish a report that sums up interviews with some 40 current or former employees of UN agencies, international and Syrian organisations working in Assad-held areas. There is an overwhelming consensus that the Syrian regime is controlling, to various degrees, their work through appointments of its people, influencing decisions on beneficiaries, where and how the aid is distributed, and how the corruption and interference are not reported on.

However, the latest statements from the UNHCR chief Filippo Grandi go beyond the previous failure to inform the Syrian refugees and international community of the reality in Assad-held areas of Syria, or his admissions that UNHCR has no access to the vast majority of returnees, including the detention camps where the returnees from Rukban and others were taken, some never to be seen again. These statements goes beyond Grandi’s failure to mention the ongoing forced disappearances, arbitrary arrests and forced recruitment of people in Eastern Ghouta during his last visit there.

So, the question is: to what end was Grandi’s talk about coordination with the Syrian regime on return of IDPs and creating conditions for return of refugees, or his assertion that it is the “government” that is supposed to “ensure security” for returnees? What was he trying to achieve? Whose interest were they to serve?

Certainly not the interests of 13 million displaced Syrians. To us Grandi’s words come across as the tip of the spear of the effort to normalise the Assad regime, an effort which displaced Syrians are watching with horror.

We are aware that the horror and shock of the millions of Syrians are easy to ignore for most of the decision-makers drunk on the supposed supremacy of realpolitik over the notions of justice and rights. However, we must ask the question: what do those who think that normalisation of Assad is the solution to the Syrian nightmare believe will happen as a result? Can they indeed imagine a scenario in which 13 million displaced Syrians, or indeed even less than half of that number, some 6 million, return to Assad-held areas with the “government” which tortured them, bombarded them indiscriminately, gassed them with chemical weapons, which continues to detain and torture tens of thousands of innocents, desecrated even their graves, is to “ensure their security”? Can they not see through the example of Daraa how the Syrian regime deals even today with those it sees as disloyal? Do they really think this would not result in another massive wave of displacement and further bloodshed? Or are they in fact finally buying into Assad’s concept of “useful and homogeneous Syria”, where the displacement of the 13 million Syrians, the majority of the country’s population, will become permanent?

We sincerely hope that they don’t and we will continue working to make sure every decision maker is aware of the disastrous consequences of such thinking. The only possible conversation about a safe, voluntary and dignified return is one that comes after a safe environment is defined by the Syrians themselves and is established in the whole of Syria, under strong, robust international guarantees. These are our inalienable rights, which we will never give up on.  This is also the only way that there can be hope of some sort of a lasting peace and stability in Syria. Everything else is a poisonous mirage that will come back to haunt us all for decades to come.

As for the idea that it is the Syrian regime that should “ensure the security” of all Syrians, promoted by Grandi, the whole world could see its validity in Ariha few days ago. The regime, through its criminal actions, has reduced the number of Syrians whose security it needs to ensure by 13, including four children. It will continue to do so, if allowed. This is the horrific truth that cannot be obscured by sleek “human story” videos and empty slogans.

SACD Board of Trustees: