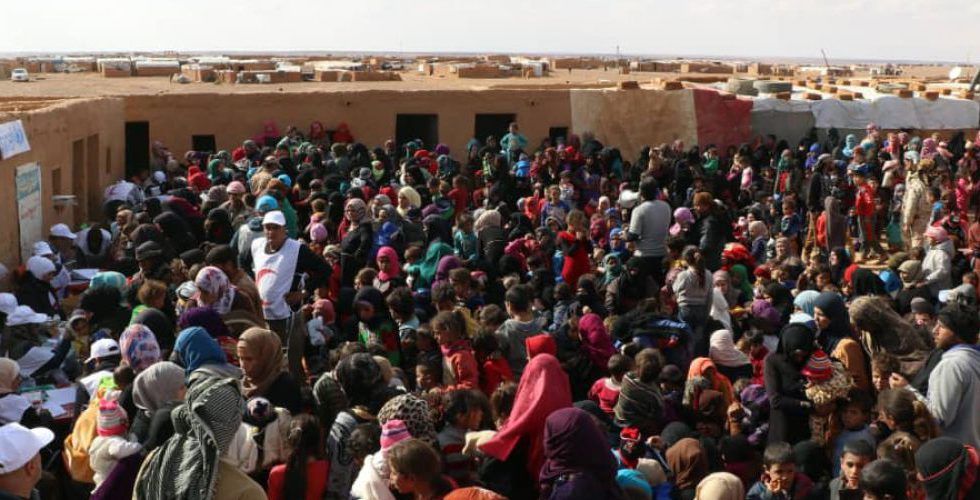 Idlib, 14 September 2021 – The Syrian Association for Citizen’s Dignity calls upon the United Nations and the Syrian Arab Red Crescent (SARC) to immediately cease all plans to transfer displaced Syrians from Rukban camp to areas under control of the Syrian regime.

While Syrians living in Rukban camp endure extremely harsh living conditions, returning them to areas under Assad control poses serious threats to their lives such as unlawful killings, forced disappearance, arbitrary arrest, extortion and harassment. The UN and SARC must uphold their responsibility as international institutions not only to provide immediate and urgent relief aid but also to protect lives.

United Nations have been sending trucks, not filled with aid, but empty, to move camps’ residents to areas under the control of the Syrian regime, despite the fact that displaced Syrians in Rukban have previously turned back UN trucks which arrived at the camp a few days ago to transport them back to regime-controlled areas in Homs. Ironically, instead of delivering much needed aid to the starving camp, the United Nations trucks arrive only to deliver empty words and no guarantees of life and with the sole aim of forcibly displacing the people.

Located in a deserted area between Syria and Jordan, the Rukban camp has been suffering from a severe shortage in aid due to Russia’s attempt to block the delivery of much needed supplies and food. Children have been dying from inadequate medical care and shortage of food. Some families were forced to leave the camp, but only to face the brutality of the Syrian regime forces awaiting them.

“The situation in Rukban camp is very, very bad, with the people left between two bitter choices: either starving to death or returning to areas under Assad, both of which are a nightmare. The world must treat the displaced Syrians in Rukban as humans, isolated from any political calculations and considerations between world powers, namely US and Russia,” says Wassim El-Hajj, member of SACD board of trustees.

According to Amnesty International’s research, the Syrian regime deliberately targets and mistreats all returnees from Rukban camp. The regime intelligence views Rukban returnees as “terrorists” and subjects them to serious human rights violations and ill-treatment. In Amnesty’s latest research, 10 out of 66 cases of documented human rights violations have targeted Rukban returnees. In turn, SACD has documented Syrian security services have arrested 174 people who returned from the Al-Rukban camp to the so-called IDP shelters in Homs and transferred to “terrorism courts” despite having previously received security clearances from the regime.

Moreover, the latest research by the Syrian Association for Citizen’s Dignity has shown that 50% of Syrians in Assad-held areas do not feel safe including those who never left, while 64% of returnees from outside Syria do not feel safe. Yet the most striking finding was that 94% of Syrians in reconciliation areas not feeling safe. If anything, this implies that the so-called reconciliation agreements signed with the Assad regime, under Russian guarantees, are empty promises and mean absolutely nothing in reality.

“There is ample evidence showing that Syria is not safe for any returns, particularly areas under Assad control. The international community is well aware of the Assad regime and Russia’s violations of human rights, especially against returnees. No Syrians in Rukban camp, or elsewhere inside or outside Syria, should ever be forced to return. International humanitarian institutions must not be complicit in Assad crimes,” says member of SACD Dr Hamza al-Omar.

Humanitarian aid must be never be politicized under any context whatsoever. Syrian lives are not bargaining chip used by states to secure gains and protect interests. The displaced Syrians in Rukban camp deserve a decent life, with the basic life standards. The return of the Syrians in Rukban, and elsewhere, must not take place unless there is a safe environment that guarantees their safe, voluntary and dignified return.