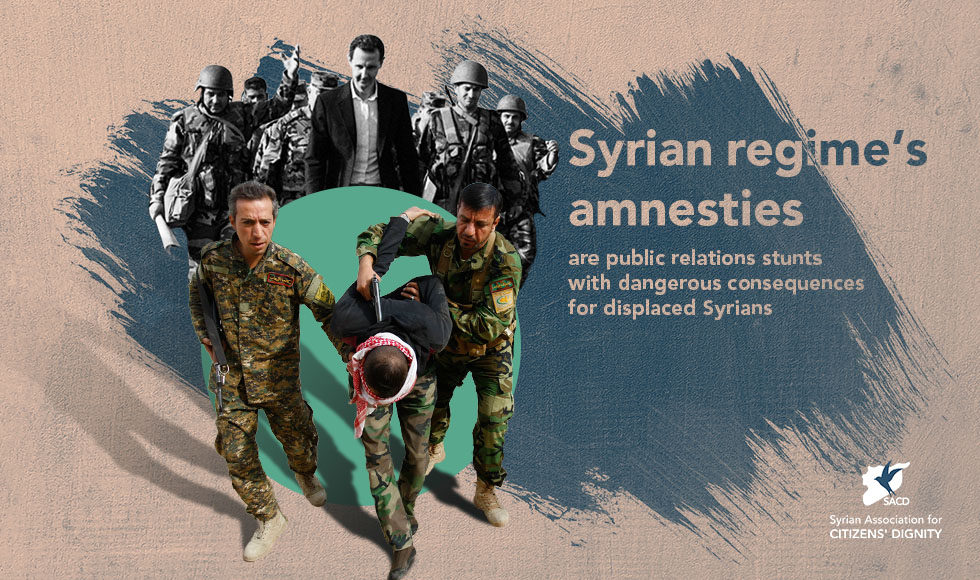 Istanbul, 28 January 2022 – The Syrian Association for Citizens’ Dignity (SACD) considers the latest amnesty decree issued by the Syrian regime, to pardon “military defectors,” as a dangerous attempt to entice displaced Syrians, especially young men, back to an unsafe Syria where they face forced disappearance, arbitrary arrest, torture and death. We believe that the regime which continues to imprison tens of thousands of detainees without a valid reason, which has relentlessly killed, tortured, imprisoned, starved and displaced its people has no legitimacy to issue amnesties and that it is the members of the regime who should be the ones seeking pardon.

A regime that does not hold any legitimacy and has displaced half of its population has no right to neither to issue amnesty decrees nor call upon the Syrians to return. A safe, dignified and voluntary return will be possible only upon a comprehensive political solution guaranteed by a meaningful and robust international presence.

While every Syrian returnee is a potential detainee, as documented consistently by the SACD, SNHR, Amnesty International and Human Rights Watch, there is a particularly great fear for the lives of army defectors who might consider returning. We remind of the European Court of Justice ruling that explicitly noted that “In the context of the Civil War in Syria, there is a strong presumption that refusal to perform Military Service there is connected to a reason which may give rise to entitlement to recognition as a refugee.”

Over the past years, the Syrian regime has repeatedly proven how unreliable it is by constantly breaching its promises and agreements. One of the most glaring examples was the reconciliation agreement conducted in Daraa, where the regime not only arbitrarily arrested, harassed the people and besieged the city, but also continually caused the forced displacement of the people of the region to the north of Syria. In addition, the regime pursued young men who have undergone the reconciliation agreement and assassinated them.

Since the popular uprising in March 2011, the Syrian regime has issued 18 ineffective and unreliable amnesty decrees. A study conducted by SACD has revealed that the regime issues these decrees when it needs to improve its image domestically and abroad, excludes political prisoners and prisoners of conscience and most importantly implements them with considerable level of extortion and corruption.

The study, which included 533 people living in areas under Assad control, has revealed that 64% of the participants found the amnesty decrees as useless, while 79% said that their detained relatives did not benefit from the amnesty decrees.

While there are tens of thousands of detainees in Syria held without trial, forcibly disappeared in underground dungeons, tortured to death, any amnesty decree whatsoever issued by the criminal regime is nothing but ink on paper to serve the regime’s desperate attempts to boost its image and serve its propaganda.

The Syrian regime instead must release all prisoners of conscious and political prisoners, reveal the fate of the forcibly disappeared, cancel anti-terrorism laws, and allow international monitoring of its prisons and detentions. The international community must hold its moral responsibility to investigate the crimes of the regime and pressure it to allow proper monitoring of its prisons. The recent verdict in the Koblenz trial shows the reality of the regime’s prisons, which await returnees and in particular military defectors, regardless of any false amnesties.

The countries hosting Syrian refugees must not, in any way, be misled by such empty promises by the regime. Such amnesty decrees do not indicate whatsoever that it is safe for any Syrians to return, let alone military defectors. There is no safe environment in Syria and any attempts to force Syrians to return without a comprehensive political solution which will guarantee a safe environment and allow for a safe, dignified and voluntary return, directly breaches the notion of non-refoulement and puts the lives of Syrians at grave risk.