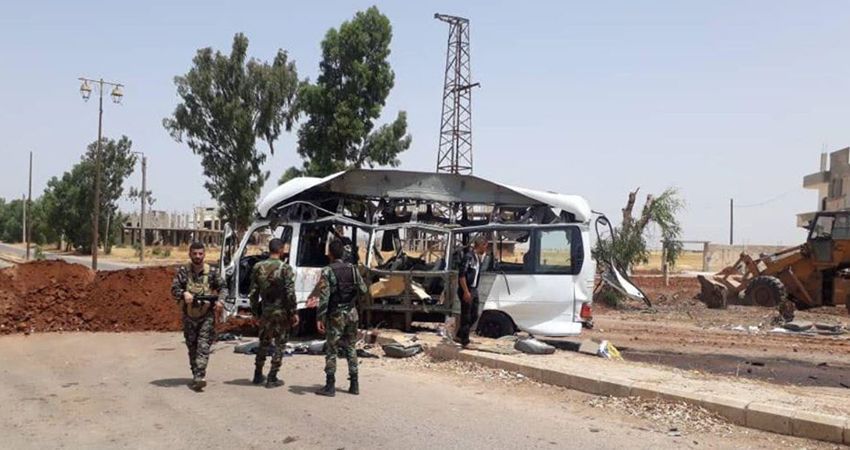 About two months after the Daraa agreement, which stipulated the withdrawal of medium and light weapons from the city, major concerns have been raised over the security of those wanted by the regime as well as those who have joined the regime forces.

Recently there seems to be a policy of assassinating young men who have undergone the reconciliation process. Less than a week ago, a young man named Ashraf Al-Fendi was shot in front of his house. Fadi was a former member of the Free Syrian Army who had undergone reconciliation with the regime and was not affiliated with any armed force.

On the same day, Ahmed Ibrahim Al-Zoubi, nicknamed Singer, was killed after being targeted by unknown individuals in Al-Musayfirah. Zoubi was a member of Hay’at Tahrir Al-Sham before the regime took control of Daraa. He was accused of leading kidnapping groups at that time and was arrested by the regime. He was later released to work in local groups on behalf of the military intelligence.

In the city of al-Sanamayn, a young man named Adel Al-Jaidouri survived an assassination attempt during which both he and his son sustained gunshot wounds. Jaidouri is also a former member of the Free Army who had undergone the reconciliation procedure with the regime and did not work for any armed group.

Military Intelligence commander Muhammad al-Lahham, also known as Abu Ali, had also survived an assassination attempt after a bomb exploded near his car. Lahham was a former commander in Al-Yarmouk Army who had left for the north of Syria as part of the displacement convoys in 2018, he returned to Daraa in 2020 and joined the Military Intelligence Division.

In Tsil town, former Free Syrian Army commander Ibrahim Al-Ruwaisi was killed by unknown individuals as well. Ruwaisi had under the reconciliation process and had not since then played a part in any armed conflict.

Young men who had gone to do their military service in the regime army were also targeted, including: Hassan Kanakri from Dael, Abdullah Al-Hamidi from the town of Al-Maliha Al-Sharqiya, and Qusay Al-Ubaid, who was targeted In the city of Nawa and who had joined the Free Syrian Army after his defecting from the regime army. Following the reconciliation process, he returned to the armed forces for military service.

Hamed Al-Daraan was also shot to death in the town of Nahtah. Daraan was a member of the committee that negotiated with the regime during the last reconciliation that took place in the town.

Activists say that there have been over 40 assassination attempts, many that ended up killing their targets, in just two months. They also claim that the regime is behind this wave of killings as a form of revenge against the population and anyone who has stood in its way at any point.

Its intelligence cells are active again and part of these operations were likely revenge against those working alongside the regime and inciting against the population.

However, the regime is in control of the governorate and is the main culprit for the chaos engulfing and plaguing Daraa. It is also the top beneficiary of what is happening in Daraa, as well as from the young men leaving it.

Evidence clearly shows that the Syrian regime, alongside its Russian and Iranian allies, does not aim to use “reconciliation agreements” to establish an environment suitable for the return of the displaced people, but rather to secure full control of the territory with negligible numbers of the original population. The model applied in the south and its resulting effects, confirm once again that the reconciliation model orchestrated by Russia and the Syrian regime, with the support of Iran, is very far from attaining any peace and stability in the region.