Reconciliation agreements in Daraa are a Russian tactic used by the Syrian regime to liquidate its opponents. 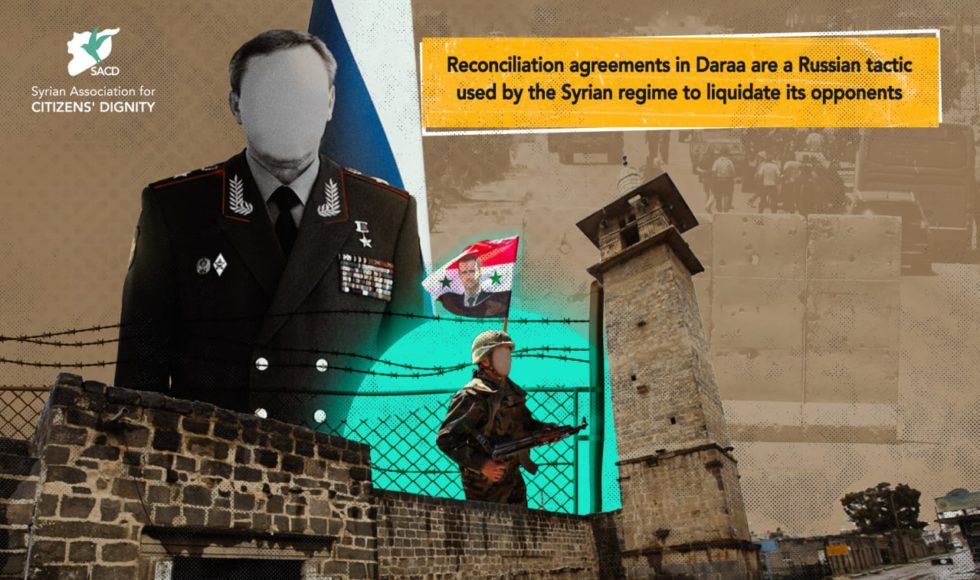 Reconciliation agreements in Daraa are a Russian tactic used by the Syrian regime to liquidate its opponents.

After their brutal sieges, evacuation schemes and relentless attacks on Syrian cities and towns, the Syrian regime and Russia are keen to promote the reconciliation areas as safe and suitable for the return of the displaced Syrians. Ironically, the Syrian regime and Russian forces were, and remain, the main drivers of the displacement of Syrians. Their efforts are concentrated on proving to the international community that the areas of reconciliation are ideal models to be implemented in all of Syria that will allegedly lead to stability and prepare for the return of the displaced people, a card they are using to encourage normalization with the regime and the beginning of reconstruction.

While Russia continues to claim that it can be a guarantor of peace in, yet it remains one of the aggressors in Syria, blatantly failing to guarantee the implementation of the so-called reconciliation agreements. The Syrian regime as well breached the agreements and continued harassing and arbitrarily detaining many civilians, including those who have signed settlement agreements, prosecuting them, and forcibly recruiting the youth into its military. The reconciliation areas, like Daraa and Eastern Ghouta, continue to rank as the worst in terms of living and security conditions.

The deteriorating conditions have led to the continuation of waves of silent displacement from Daraa to the north of Syria, which confirms the impossibility of the safe, voluntary and dignified return of the displaced Syrians to the. Today Daraa stands as a striking example that Russia, the perpetrator who committed crimes of killing and forced displacement against Syrians, cannot be the guarantor of any peace and stability in Syria.

The reconciliation agreements, brokered by Russia under its guarantees, gave the Syrian regime a golden opportunity to liquidate its opponents in areas covered by agreements. Raid campaigns, arrests and assassinations continue on a daily basis, which impugns all claims by Russia that its model of reconciliations bring stability and enhances security.

The Syrian regime used a form of collective punishment by cutting off services to the governorate instead of increasing them, as allegedly promised in the concluded agreements. Since Daraa entered into the reconciliation agreement, the repression prevailed and the people’s sense of insecurity has persisted. According to SACD’s Normalization of Horror report, 94 percent of the people in the reconciliation areas say they don’t feel safe.

Earlier in March, the regime forces killed 33 civilians and opposition fighters from Daraa. Among the victims are a child, a woman and a young man who was killed under torture in regime prisons, while 28 others were assassinated by direct shooting.

In addition, a “hidden killer” has emerged in Daraa, whose identity remains unknown. He carried out a series of assassinations, targeting former militants, civilians, and media and human rights activists, while kidnappings prevailed.

A young man named Haider Abdullah Al-Salamat, who is a former member of the opposition factions, was killed by several shots by unknown persons in the city of Al-Harak, east of Daraa. Al-Salamat signed a reconciliation settlement after the regime forces took control of the region in 2018. Almost two years ago, an assassination attempt caused him severe injuries.

Qusay Hussein Al-Zoubi was also anonymously killed in the town of al-Yadouda, west of Daraa. Al-Zoubi was a former member of the opposition factions. He got a settlement card and did not join the regime forces or Russia.

Yassin Ghazi Abu Rukba was detained 4 years ago in Sednaya prison, and whose body was handed over to his family by the regime forces a few days ago. Abu Rukba was a defector from the Syrian regime forces and turned himself in in 2018, to take advantage of the general amnesty issued by Bashar al-Assad to ‘pardon’ the defectors. This case is one of many, which is a clear testimony to the ineffectiveness of the Russian guarantees in consolidating peace and stability in the area.

According to the Syrian Network for Human Rights (SNHR), an eighteen-year-old civilian, Ammar Amin al Aboud was shot and killed on May 24, 2022, by unidentified gunmen in al N’eima village in the eastern suburbs of Daraa governorate, which is under the control of the Syrian regime forces.

Since the beginning of 2022 up until May, assassinations, arrests and enforced disappearances led to the killing of more than 100 people, including three children, in addition to a woman and a man under torture. In addition, the Daraa Martyrs Documentation Office documented the kidnapping of at least 65 people.

The assassinations continued to target the most prominent leaders of the opposition factions, such as Adham al-Karad who was killed in October 2020. Al-Karad was the commander of the engineering and missile battalion and a member of the negotiating committee for the city of Daraa al-Balad with the Russian commanders. He signed a reconciliation settlement yet refused to join any group affiliated with the Syrian regime or Russia.

The civil negotiating committees were a target too, including a member of the committees in the western region of Daraa such as Sheikh Ahmed al-Baqirat from the town of Tel Shehab, on December 9, 2021, and Yasser al-Dneifat who was known as Abu Bakr al-Hassan on July 14, 2020. He was holding the position of Spokesman for “Jaish Al-thawra”, one of the largest former opposition factions in southern Syria.

On May 25, 2020, members of the Central Negotiating Committee were ambushed west of Daraa, while returning from a meeting with the Russians. The ambush resulted in the killing of three members of the Committee, who were leaders of the former opposition, and the injury of three others, including a leader of the opposition and the most prominent member of the Committee, Mahmoud al-Bardan Abu Murshid and Abu Ali Mustafa of Russia’s Eighth Brigade, which Russia established as a sub-division of the Fifth Corps and incorporated contingents of former rebels into its ranks.

During the year 2021 alone, Daraa Martyrs Documentation Office documented 508 assassination attempts and operations, which killed 329 people and injured 135 others, while 44 people survived assassination attempts. This indicates the regime’s failure to keep its promises and the extent of its seriousness in the reconciliation agreements and its failure to achieve them. Hence, the recent assassinations are not merely exceptional, but a part of the normal pattern of harsh reality in the areas under the regime’s control.

The Daraa Martyrs Documentation Office also documented the arrest of 359 people by regime forces, of whom 144 detainees were released later in the year, while two of them died under torture. These operations constituted one of the most prominent continuous violations committed by the regime forces during the year 2021, affecting both civilians and former opposition fighters in areas of reconciliation agreements, which lack security and safety and were the biggest proof that the regime’s promises are false.

With the absence of the state’s effective and impartial judicial system to achieve legal accountability, these deteriorating conditions were reflected in the entire southern area and prevented the people from living in safety and stability. Certainly, the Syrian regime will not seek to improve the conditions that it caused in the first place. Neither Russia will make any efforts to create a safe environment necessary for the return of the displaced Syrians, at a time when it played a major role to displace them and threaten their lives.

There is a fundamental reason that prevents the displaced from thinking about returning, especially in absence of a safe environment with international robust guarantees.

This is mostly because of the regime’s security policies and practices, which are almost identical in all areas controlled by the regime.

When asked about their ‘sense of safety and security’ in areas controlled by the Syrian regime, 57 percent of the respondents in our Normalization of Horror report indicated that the security forces’ authority was one of the reasons they did not feel safe—this percentage rises to 90 percent in reconciliation areas. This is a clear indication of the failure of these agreements.

This feeling won’t fade unless the reasons that forced the Syrians to flee their homes are eliminated. Nowhere in Syria is safe to return unless the Syrian regime and its allies, particularly the Russian ally, are subject to legal accountability for all the crimes that they have committed and continue to commit in Syria.

One of the main pillars of establishing a safe environment in Syria is holding perpetrators accountable for their crimes and violations. As long as the Syrian regime and Russia continue pursuing their policies unabated, there can be no fruitful talks about the return of the displaced Syrians, the creation of a safe environment or the conclusion of a comprehensive political solution. It is quite unfathomable that the world who sees Russia as an aggressor in Ukraine would even consider it as a guarantor of any peace efforts in Syria. As long as Russia is not held accountable for its crimes, it will not stop in Syria and Ukraine, but its sway will expand to other regions as well.