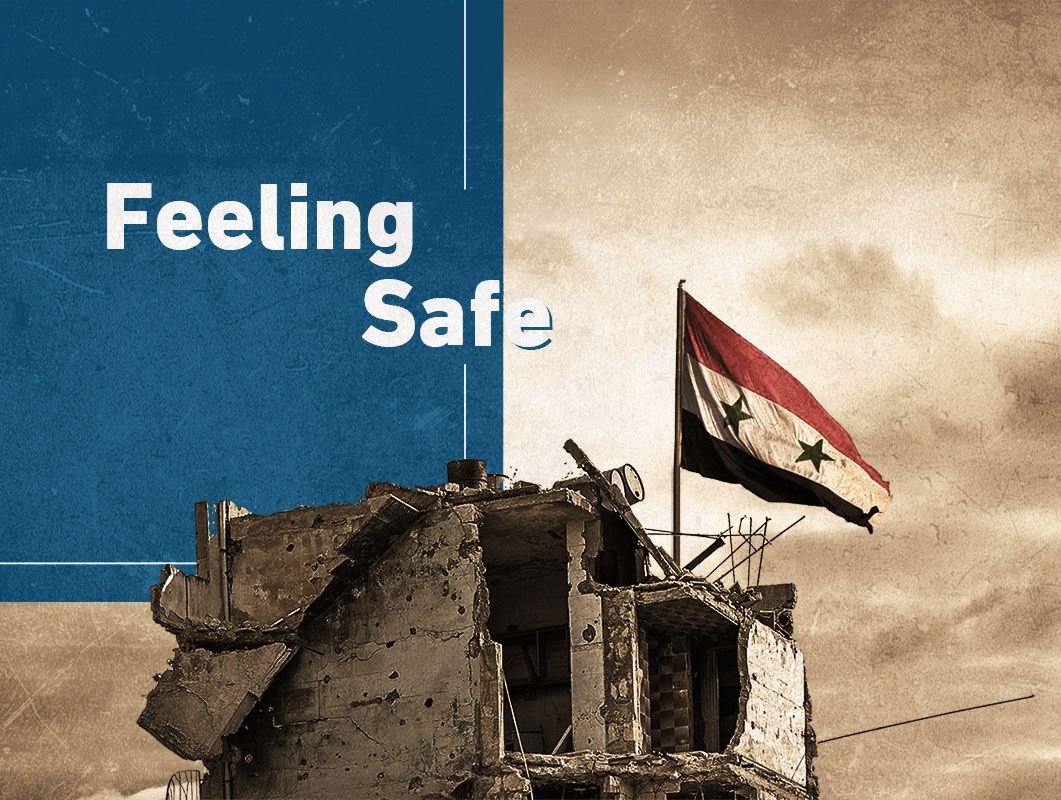 Large number of Syrians feel unsafe, with the perception of safety heavily tied to the area's perceived threat to the regime

As of March 2020, with the support of Russia and Iran, the Syrian regime increased its control to approximately 60 per cent of the country’s territory. It regained control of most of the areas previously held by opposition factions in Aleppo, Daraa, Eastern Ghouta, southern Damascus, Homs, and Hama. Yet these developments have not translated into stability or security. Daraa is the best example[1] of the lack of security and the failure of regime policies. This consolidation of territorial control has not increased the population under government rule, since Syrians have fled almost every area that the regime captured. More than 13 million Syrians—54 per cent of the pre-war population—are currently displaced outside the country and in areas beyond the regime’s control.

However, the Syrian regime and Russia are pushing a normalization narrative in an attempt to create a misleading image of life getting “back to normal” in Syria, and the false notion that regime-controlled areas are safe.  This narrative is used as a premise for a disingenuous call to start the premature return of displaced Syrians in order to pressure the international community to fund reconstruction and the restoration of basic services in areas under the regime’s control.

The regime defines a “safe environment” as the absence of military offensives and full-scale operations. However, a truly safe situation entails a much wider range of issues, conditions, and rights that must be provided to all Syrians. These broader considerations are prerequisites for the return of displaced people and for a comprehensive and sustainable political solution in Syria.

The Syrian regime and its allies were the only parties conducting full-scale military assaults on civilian areas in Syria during 2019–2020. In Hama, Idlib and Aleppo, the regime’s attacks shattered its own definition of “safe environment”, causing the displacement of an additional 1.3 million IDPs during this period. While such a narrative is expected from the Syrian regime and its allies, it is concerning that some Western governments are starting to adopt a similar definition of a “safe environment” in Syria. This report highlights Syrians’ own feelings and views of safety within this environment, through an extensive survey and analysis. In an upcoming document, the SACD will present in detail the conditions for a safe environment as defined by the Syrians themselves.

The reconciliation areas present the worse deterioration in the sense of insecurity amongst survey respondents. While 74 per cent of participants in the SACD’s 2019 survey reported not feeling safe in their areas, this figure increased to 94 per cent in the 2020 survey. Surprisingly, the same trend was observed in areas controlled by the regime since 2011, where perceptions of insecurity jumped from 39 per cent in 2019 to 51 per cent in 2020. These numbers clearly indicate that the reconciliation areas have failed to provide security to citizens, and that the regime’s security policies and general practices are weakening the sense of security amongst Syrians.

Although the overall percentage of Syrians who were arrested or had a relative arrested in the last 10 years dropped from 53 per cent in 2019 to 40 per cent in 2020, it rose considerably in reconciliation areas during this period from 64 per cent to 89 per cent. This is another clear indication of the failure of the reconciliation agreements. The percentage of arrested people decreased for two main reasons. First, the sample size increased and covered a wider range of provinces, some of which, like Latakia, were less affected by regime security policies. Second, the regime had already targeted most of the dissidents in the areas under its control by 2019, or forced their displacement.

People forced to return to regime control from displacement or through “reconciliation” do not feel safe, with significantly higher levels of fear in their daily lives. Their feeling of insecurity is being informed by events that were directly witnessed or experienced.  Some 50% of people in the Assad-controlled areas don’t feel safe, including those who never left; 67% of returnees from outside Syria don’t feel safe, and those in the reconciliation areas fear worst with 94% saying they don’t feel safe. Most cite the security authorities’ grip  and fear of rampant insecurity and crime as their reasons for feeling safe. That said, there are no safe areas, with some of the more practical measures of safety showing that security is poor everywhere, because it’s due to security policies by the same authority.

Only half of the respondents reported “feeling safe” in their current locations within regime-controlled areas (Figure 6). This analysis breaks down respondents’ concept of “feeling safe” according to: expectations based on conditions before moving into regime-controlled areas, current displacement status and history of each respondent and the region they last lived in, as well as considering whether this feeling is based on perceptions or experience.

Figure 6: Feeling of safety, all participants

Note: figure shows participants’ responses to the question “Do you feel safe?”

There is a considerable difference in feelings of safety based on displacement status and origin of displacement (Figure 7). Refugees who returned from abroad to regime-controlled areas feel the least safe: 67 per cent did not feel safe and feared for themselves or their families, and 62 per cent of returning participants from another region in Syria did not feel safe.

Note: figure shows participants’ responses to the question “Do you feel safe?”.

IDPs who moved within regime-controlled areas felt the safest, followed by those who had not left their original area since the beginning of the conflict. Syrians who remained in regime-held areas either did not feel threatened enough to flee, or a lack of options forced them to stay.

Participants’ sense of safety was highly affected by the gradual adjustment and adaptation that those who stayed in regime areas had to go through, which made them aware of the security and legal threats they face and forced them to develop strategies to manage them. In reality, the security situation is equally dangerous for all of them.

Refugees and IDPs contemplating a return to regime-controlled areas (as well as most of the country) do not have sufficient information about security and living conditions from a reliable and independent source. Thus they rely on narrow and limited perceptions, or incomplete and misleading information.

Reconciliation areas feel the most unsafe: 94 per cent of those living in these areas report feeling insecure (Figure 8). This shows the fragility of the security situation in the reconciliation areas, and debunks the myth of a successful “reconciliation” model. It also calls into question the viability of reproducing this model elsewhere in the country.

Figure 8. Feeling of safety, by type of area

Note: figure shows participants’ responses to the question “Do you feel safe?” broken down by type of area.

This sense of insecurity is caused by the regime’s continuous violations of the terms of the reconciliation agreements on security and conscription, and the widespread assassinations and arbitrary arrests. Multiple reports suggest that these areas, and their inhabitants, remain problematic from the regime’s point of view, and that they are regularly denied access to services and face security raids and limited freedom of movement at far greater rates than other areas. However, more than half (52 per cent) of respondents who remained in regime-controlled areas since the beginning of the conflict do not feel safe, while approximately one-third (29 per cent) of those who today live in areas captured by the regime by force do not feel safe. This low percentage is due to the fact that Syrians who moved to areas captured by the regime mostly consider themselves loyalists and believe (or are almost certain) that they will not be targeted by the regime’s security forces. Normally they have not taken any part in any activity or openly expressed anti-regime sentiments; most of those who opposed the regime (or have family members who did so) have left.

Insecurity: Evidence Based or Perception, by Area Type

Syrian’s sense of insecurity is evidence based. Most of the participants who reported feeling unsafe said that this was due to the violations of rights, abuse, and extortion that they experienced first-hand, against themselves or others from their family or community. The percentage of people who witnessed direct violations was consistent across all types of areas (Figure 9).

Figure 9. Basis of insecurity, by area type and direct vs. indirect experiences

Note: figure shows participants’ responses to the question, “Do your feelings of insecurity depend on the actions you have experienced or your perceptions?”

Despite varying degrees of “feeling safe” in different areas under the regime’s control, people in all areas experience similar levels of rights violations and insecurity. This confirms that similar security policies and threats exist in all regime-held areas; thus no areas are safe for refugee returns.

Reasons for Not Feeling Safe

The main source of insecurity remains the regime’s security policies and practices, which are almost identical in all areas controlled by the regime, regardless of how they were captured. Another major factor (expressed by 65 per cent of those polled) causing the sense of insecurity is the escalation of organized crime such as kidnapping, extortion and murder (Figure 10). The increase in such activities appears to be correlated with the collapse of the economy and the fact that the regime is unable to pay full salaries to the security forces who collaborate with organized crime targeting vulnerable civilians, especially displaced people.

Figure 10. Sources of feelings of insecurity

Note: figure shows participants’ responses to the question “What are the reasons for you feeling insecure?”

Reasons for Insecurity by Area Type

While some causes of insecurity vary between different types of regions, the most prevalent and consistent source in all areas is still linked to a fear of the security forces (Figure 11). Even in areas controlled by the regime since 2011, a high percentage of respondents (57 per cent) reported that the security forces’ authority was one of the reasons they did not feel safe—this rises to 90 per cent in reconciliation areas. This indicates that the security forces are used to terrorize and subdue citizens rather than provide stability and order and bring a sense of security.

Note: figure shows participants’ responses to the question “What are the reasons for you feeling insecure?”

Nearly half of the respondents from both reconciliation areas and areas under permanent regime control fear the presence of regime-affiliated militias. The role, authority and chain of command of these groups are not clear. Syrians are not sure how to deal with them or what kind of mandate and authority these militias have. There is no doubt that they are causing major damage and fear to civilians.