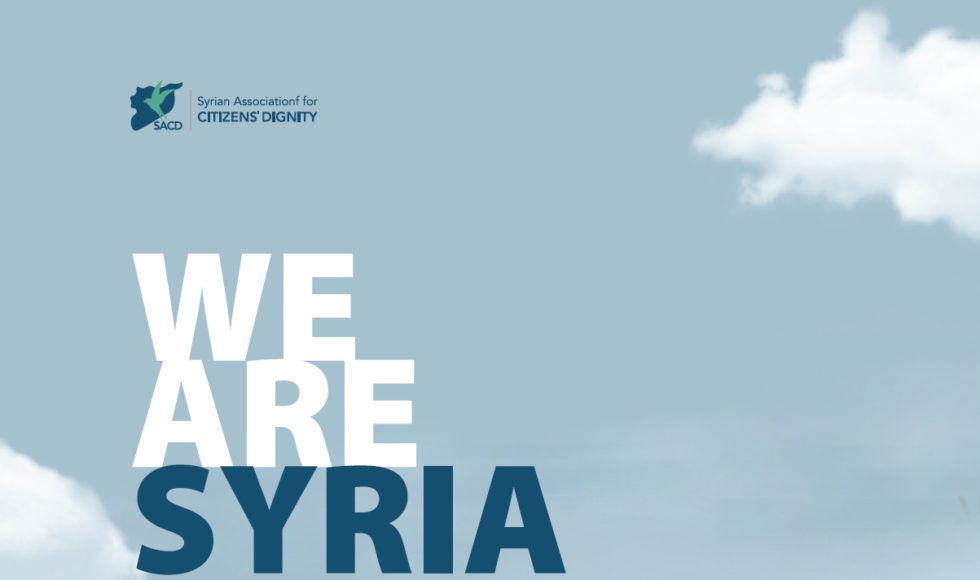 We at the SACD with our different networks and constituencies within displaced Syrian communities are heartened by the statements of many states expressing concern that we feel about the appropriateness of such a conference to be hosted by Russia. Regardless of the public statements of Russia and the Syrian regime, there is not a shred of doubt in our minds that it is far from any genuine effort aiming to ensure a safe, voluntary and dignified return of some 13 million displaced Syrians. This conference comes at a time when the conditions for such safe, dignified and voluntary return to Syria are far from possible.

We believe that the refugees’ issue cannot not be unilaterally managed by Russia and the regime. There is no possibility that any organized return can take place under the auspices of two entities who have engaged in systematic and indiscriminate attacks against Syrian civilians with the aim of forced displacement, as formulated in the most recent Human Rights Watch (HWR) report. How can anyone expect displaced Syrians to believe that a safe, voluntary and dignified return can take place under the guarantees of those who committed crimes against humanity to displace more than half of Syria’s population?

Instead, the refugee file must be addressed with the displaced at its heart, alongside likeminded states and host countries, in line with international law and Resolutions 2254 and 2118, and the legitimate aspirations of the Syrian people.

Securing genuine conditions for a safe and dignified return will be possible only under strict and meaningful international supervision. And it is displaced Syrians who must be called upon to define what the minimum conditions for a voluntary, safe and dignified return constitute in reality. It is essential to develop a political solution that has the rights of displaced Syrians at its foundation, and the creation of an environment for safe, voluntary and dignified returns as its backbone. The refugees return issue cannot be decoupled from the political process as three-quarters of displaced  Syrians need to see a comprehensive political solution guaranteeing their rights before they would feel safe to return.

For example, no meaningful return can take place until a new constitution subject to a popular referendum by all Syrians is in place which will limit the powers of the security services and limit the authority of any Syrian government to prosecute individuals without the necessary and due judicial procedures. Although the constitution itself was never the reason behind the displacement of Syrians, nevertheless, the Syrian regime has consistently and unilaterally stymied the process to reach an agreement about the constitution and the political transition.

The parties to such agreement would be obligated to accept, without discrimination, the return of all displaced, including those given temporary protection by third countries.

The basic rights guaranteed in such an agreement would include the right to return and have property and tenancy rights restored to their status at March 2011, without  risk of persecution, harassment, discrimination, intimidation or humiliation on the basis of ethnicity, political orientation, religious affiliation, or any other grounds. Other rights guaranteed before any organized return would include, among others, the right to freedom of movement throughout Syria; the right to choose destination of return, including the right to exchange or sell property without hindrance or any form of prohibitive discrimination; the right to sufficient information on the prevailing conditions of return; and the right to refuse return to situations of serious danger of insecurity, or to areas lacking basic infrastructure for a normal life

A number of confidence-building measures that address the concerns of the displaced should be taken. These include the release of political prisoners and those detained under the pretext of rebelling against the regime, implementation of an accountability mechanism to investigate allegations of war crimes and crimes against humanity, the removal of officials and security personnel documented by relevant U.N. bodies to have committed serious crimes; amnesty from prosecution for political or crimes resulting from political action or displacement; and amnesty from recruitment to the armed forces for returnees.

Laws issued by the Syrian regime in recent years that give it the right to pursue and arrest political opponents must be repealed, as well as legislation that deprives Syrian citizens of their possessions, homes, and properties due to political views.

Syrian security services must be restructured to ensure that they adhere to the political agreement and the amended constitutional provisions. This would include sacking the heads in the security services responsible for crimes committed against the Syrian people and the building of a clear roadmap under international supervision to build a professional security apparatus.

These are just some of the elements of such a political agreement, with a number of others required to provide for a comprehensive solution to the issue of displacement, including a repatriation plan to be developed by the UNHCR. This would require sequencing and prioritization of those most in need, certification of conditions to allow for return, and coordination with host countries.

Additionally, thresholds for refugee return should not be defined by the minimum protection thresholds set by the United Nations High Commissioner for Refugees. Any return thresholds must take into account the minimum conditions for return defined by displaced Syrians themselves. Our recent report was based on a survey of Syrians who expressed what those thresholds and conditions are and is attached to this email.

We have published several briefings on these reports, which document the insecurity suffered by those forced to return to Assad-held areas to date and capture the minimum conditions for return as defined by the displaced Syrians themselves. We will soon share our upcoming report which will provide a more comprehensive look into the security and living conditions in Assad-held areas, based on a survey of more than 500 people from various parts of Syria, which clearly illustrates that we are very far from any conditions for organized return of displaced Syrians in a safe, voluntary and dignified manner.

We note with concern Lebanon’s participation in the conference organized by Russia’s Ministry of Defense. Lebanon’s recent Refugee Return Plan is not in accordance with International Refugee Law and the rights of Syrian refugees in Lebanon are under heavy pressure and they face an increasingly difficult situation.

The increasing frustration amongst host countries is resulting in a decreasing quality of protection and quality of life for Syrian refugees. With pressure on these people increasing, some have returned even though the basic conditions are not met, resulting in forced and premature returns and further cycles of violence and instability.

In order to mitigate this, states should offer their support to Syria’s displaced and the host countries in the form of ongoing financial assistance.

The cornerstone for any sustainable and comprehensive political solution in Syria is the safe, voluntary and dignified return of displaced Syrians, and this conundrum should not be seen as a humanitarian issue only; it is fundamentally a political issue. Such clarity could potentially lead to much-needed decisiveness and commitment to real solutions on the part of the international community.

As a grass-root civil-rights movement, working with and reaching out to displaced Syrians across the globe and in Syria, the SACD strives to represent the views of these communities which constitute more than half of the population of Syria, and endeavour to ensure the rights of a safe, voluntary and dignified return, we should be part of any process or initiative tackling the issue of returns. Any such any international initiative or engagement related to the refugees’ issue should take into account a set of principles that safeguard the right of the displaced Syrians to participate in the decision-making that affects them directly.

Principles for engagement with Syrian IDPs and Refugees

With over 13 million people forced to leave their home, more than half of Syria’s pre-war population is displaced inside or outside the country. The rights and views of this sector of the population must be central to political and non-life-saving humanitarian and development work. The following is a set of principles for engaging Syria’s displaced in the political process, track ii or local dialogues, ERL or development work, or other relevant discussions about plans, processes, or projects that concern the rights of the displaced.

The rights of the displaced, as defined by international humanitarian and refugee law, must be considered as a central part of any process, plan, or project in or about Syria, including where the displaced are an currently-absent stakeholder in local planning. This must include; HLP rights and the right of return.