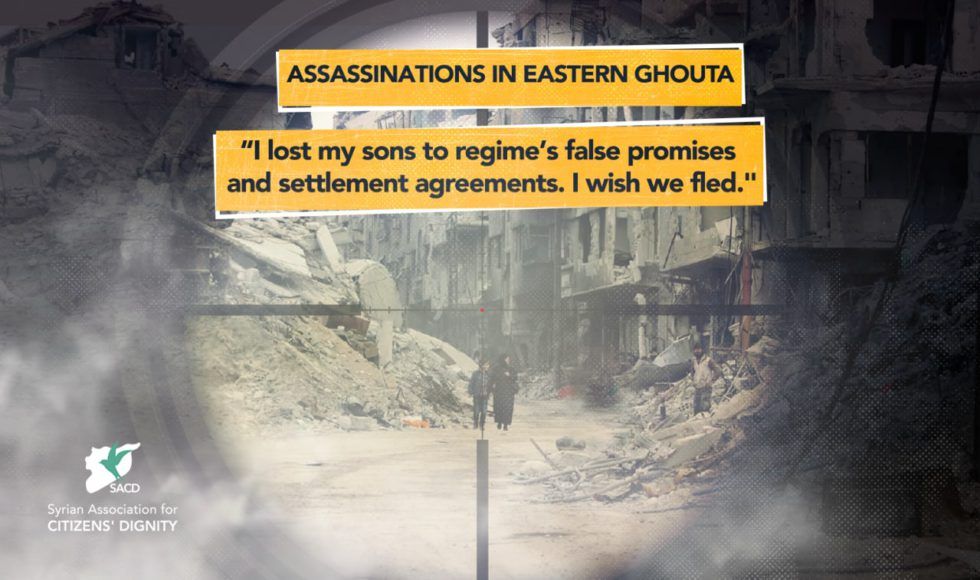 In November 2021, Russia intensified its efforts to organize a conference on refugee return in Damascus. The conference was supposed to present areas of Syria controlled by the Syrian regime as safe for return and attract desperately needed reconstruction funds needed to prop up the failing economy ravaged by regime’s corruption and forced displacement of the majority of Syrian population. The conference itself was a sham, a theatre of untruths and false promises ignored by most countries which could fund eventual return of displaced Syrians.

Only a few miles away from Damascus, a small number of Syrians who never left Eastern Ghouta, opting to trust that the reconciliation agreements, brokered by Russia, would bring peace and stability to the region found themselves living under a merciless security grip that threatens, abuses and kills Syrians amid extremely poor living conditions. They are living witnesses to how “safe” are the regime-held areas.

To get a full picture of the reality of their life, we spoke with Umm Khaled, a Syrian woman, who decided to remain in her hometown, Hamouriyeh, after the displacement agreement was concluded in 2018.

Can you tell us about yourself?

I am 55 years old; I live with my sons and my daughter in Hamouriyeh in the Damascus countryside. We did not leave the town because of the checkpoints of the regime forces, and I was afraid for my sons to be arrested.

Before the conflict in 2011, we depended on my husband’s pension and the earnings of my sons who worked in carpentry before being bombarded in 2012, and to secure a few living requirements, worked in NGO. Their work continued until the start of the last campaign on E. Ghouta in 2018.

Can you tell us about that campaign?

It started in February with heavy bombardment by warplanes and artillery. The destruction was massive and unspeakable. A delegation from our town left on the eighth of March, including the member of the Ba’ath Party (we used to live together in the same neighborhood) and several town notables to meet regime representatives and Russian commanders.

When the delegation returned, they asked the youth to rally in support of the Syrian regime and to raise the Syrian red flag there as a goodwill gesture, and they gave my sons flags and banners (because my sons were known for their extensive social relations).

The rallies took place, led by my sons, in addition to some of their friends and several children. The bombardment calmed down a bit on that day to encourage the rest of the towns to rally, so the rallies were held in small numbers in the various towns.

Two days later, suddenly the bombardment intensified tremendously. The delegation announced that “corridors have been opened for to leave E. Ghouta towards shelters, pending the elimination of the militants,” they said.

Why did you decide not to leave? How did the situation become?

Our neighbor in the Ba’ath Party told my sons that he gave their names to officials in the regime and their situation is exceptional. So, they do not need to leave because they were among the organizers of the pro-regime rallies.

The people’s biggest concern was for the killing and bombing to end. The bombing stopped, but life did not differ from what we were living before. Despite the many promises that the regime gave to improve services and living conditions and settle the conditions of wanted persons.

What the intelligence agencies worked on immediately after taking control was that they opened centers to settle the status of those wanted or those wanted for compulsory and reserve military service. The return of civilians who went out to the shelters began, and the young men and even the elderly men went to the centers to submit a request to regularize their status for fear of being pursued or arrested.

Do you mean that life did not return to normal?

Certainly not and never will. The regime did not keep any of its promises, even in the settlement processes. After the many promises and reassurances to my sons, they went to the settlement centers to settle their situation.

Then we were surprised that my son Khaled was summoned to one of the Air Force Intelligence checkpoints. They extorted him by orders to arrest him but can stop the arrest in exchange pay huge bribes and giving him two days to bring it.

Khaled went to our neighbor of the Baath Party, who was at the head of the delegation, and told him what happened. My son was surprised when that neighbor said that he could not do anything and that we had to do what they asked.

There is nothing left to do with this reality, except pay bribes in two days. My sons sold the carpentry tools at a low price due to the lack of customers, which forced me to sell my gold jewelry. Khaled with Ahmed went to the checkpoint to hand over the money, and the officer told them that everything is okay now.

What happened to your family after that?

They did not tell me anything about Ahmed. I was not given any information about him despite the release of some young men, who were arrested with him, and they told me that he was with them for a while, then they no longer saw him or heard anything about him.

I wish we had gone out with those who went to the north of Syria. I wish we never believed regime’s lies and promises.

Russia cannot be a “guarantor” in Syria

The regime did not fulfill its promises and took advantage of the reconciliation agreements.
By comparing the conditions in the different areas in which the reconciliation agreements were concluded, we find that those areas did not witness any stability nor did the situation calm down. The people could not live in a state of safety and peace. The most prominent thing that happened recently was the increase in assassinations in Daraa, which stands as a living example of the Russia-brokered peace looks like: assassinations, enforced disappearances and arbitrary detentions.

The Syrian regime is still the ruler itself and is still imposing its brutal security grip with the same mechanisms of oppression and brutality, including systematic killing and torture. The reality of what happens is that regime takes advantage of the golden chance that Russia gave him to liquidate his opponents through agreements of reconciliation. The current situation is such that the Syrian regime blatantly failed in fulfilling its promises of improving the living conditions in areas under reconciliation agreements, providing safety and security for this who remained and, most importantly, exonerating all those who were former members of armed opposition groups. Yet the reality speaks otherwise. Ever since the Syrian regime entered those areas, the security situation has been in decline, with the majority of Syrians reporting that they do not feel safe living there.

The international community must do away with any illusions that Russia can play the role of a “guarantor” with regards to any organized return of the displaced Syrians. It is about time to deal with Russia as a party in this conflict rather than a mediator. Russia’s intentions in have been made blatantly clear in Ukraine, where it implemented the policies practiced in Syria such as targeting civilians and massive forced displacement, which is a tool Russia used to attain military and political goals.

If the world would have taken Russia’s crimes against humanity and war crimes committed in Syria seriously years ago, maybe we could have prevented the disastrous situation we have today in Ukraine.

After its military intervention in Syria in 2015, which resulted in the displacement of millions of Syrians, it is documented that its forces perpetrated 182 massacres that killed 2,228 civilians and injured 3,172 others. This essentially makes Russia an agressor in Syria, and nothing close to a guarantor of any safe, voluntary and dignified return for Syrians, whatsoever. The party that played a role in displacing half of the Syrian population only deserves to be held accountable for its crimes rather than being granted a seat on the table of negotiations.

There is no scenario in which displaced Syrians can be made to accept guarantees of the perpetrator who destroyed their homes and forcibly displaced them. Neither  in Ukraine, nor in Syria. The international community should be consistent in the way it deals with Russia’s policies and atrocities in both Syria and Ukraine in order to have any credibility in the eyes of Syrians.