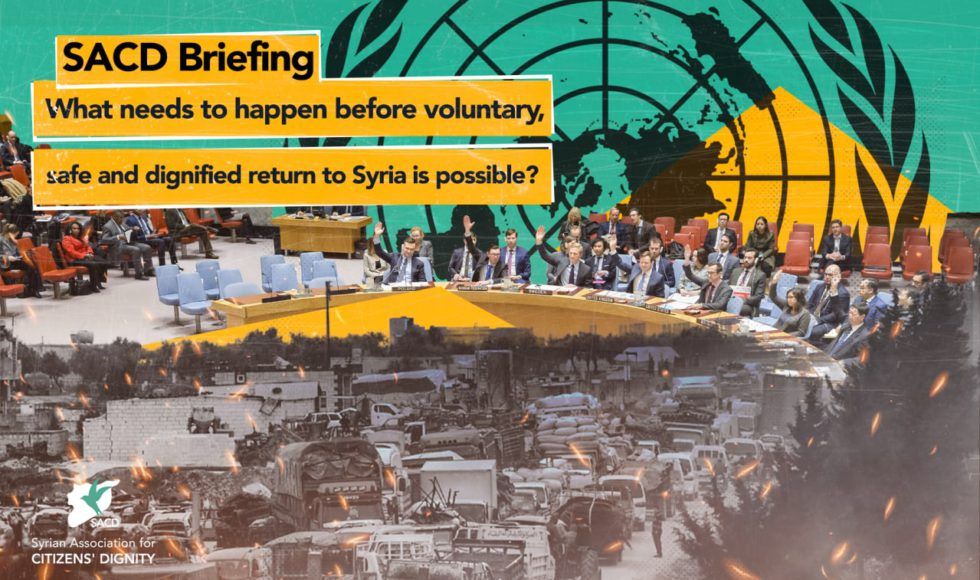 Despite the desperate search of some policy makers and international mediators for a quick solution or flirtations with appeasement of the Syrian regime and its Russian and Iranian sponsors, a comprehensive and sustainable political solution that meets the aspirations of the Syrians is still the only way to end the conflict in Syria, restore stability to the entire region and stop the spill over of the consequences of the conflict to neighbouring countries and Europe.

First and foremost, the international community must do away with any illusions that Russia can have a role of a “guarantor” in relation to any aspect of organised return of displaced Syrians to their homes, and most importantly: it is about time to deal with Russia as a party in this conflict rather than a mediator. As it has been made blatantly clear in Ukraine, where Russia has implemented the policies practiced in Syria for the last six years, targeting of civilians and massive forced displacement is a tool Russia used to attain military and political goals. There is no scenario in which displaced Syrians can be made to accept guarantees of the perpetrator who destroyed their homes and forcibly displaced them. Not in Ukraine, nor in Syria, and the international community should be consistent in the way it deals with Russia’s policies and atrocities in both countries (Syria and Ukraine) in order to have any credibility in the eyes of Syrians.

In recent years, the safe environment has turned into the key word in all political discussions of influential countries in Syria, and despite the assertion of all parties that a safe environment is the necessary condition for the achievement of any component of the political solution, it is It has not yet been defined in itself, nor a road map for its realization has not been drawn up. Most importantly, Syrians have not been consulted about the conditions and determinants of this safe environment.

For more than two years, the Syrian Association for Citizens’ Dignity (SACD) has systematically and methodically communicated with the displaced Syrians and refugees to understand their reality and draw an accurate picture of their vision for the future of Syria, and the conditions for their return to their places of origin, in a safe, voluntary and dignified way.

Displaced Syrians’ vision of the safe environment captured by the SACD stems from a purely human rights and humanitarian perspective, away from any political considerations, as it focused on the need to give Syrians a real and influential voice in the political discussions that will determine their fate, realizing that any mistake in defining or implementing a safe environment will likely cost Syrians their lives and dignity.

What sets our effort apart is that we did not focus on theoretical definition of an ideal safe environment from a conceptual point of view, but we rather concentrated on converting the vision and aspiration of Syrians into a concrete roadmap with precisely defined implementation procedures and phases that would eventually lead to the creation of a safe environment for the entire country and for all Syrians.

This roadmap is effectively a three-phased framework that divides the return process into three very distinct main phases, each with its own pre-requisites, goals, risks, and a package of practical measures to take into account. These phases are:

Such a phased approach is driven by the complexity of the return operation when it is analysed from an operational point of view rather than from a theoretical or even narrative perspective. Segmenting such monumental undertaking is a must, because every phase has different prerequisites and objectives, and every phase lays the ground for the following phase, which would be different in work areas, actors, tools and results. Most importantly each phase has to gain the displaced Syrians’ confidence in the whole operation, and show gradual yet tangible progress and a string sense that guarantees by credible international actors are in place.

The steps identified for the pre-return phase in the upcoming SACD’s safe environment paper unequivocally show how any talk about the return of Syrian refugees at this point in time is a travesty of the reality, since none of the prerequisites for a large-scale return are in place and in some cases they have not even been identified. For this phase the following areas of work and change need to be addressed before displaced Syrians can seriously start thinking about voluntarily return to their homes:

The SACD will start a public dissemination campaign in May for its safe environment paper. This campaign will include a wide range of outreach and consultation activities with regional and international diplomats and policy maker in order to discuss the paper in detail and explore the avenues of how to incorporate the main principles, concepts and most importantly practical approach into the political discussion.

While these are some of the steps that must be taken in order to start substantive discussions on  safe and dignified return, it is crucial to understand that it is not possible to start thinking about enactment of these measures without taking into consideration the following facts:

The reality in Syria is such that despite the dire conditions Syrians are suffering in displacement, whether internally or in some of the host countries, they are still unwilling to return except for small numbers of those who are forced to do so for various reasons. This is primarily due to the fact that the conditions which caused the displacements are still in place and active and the regime continues to repress the areas it controls.

When the detailed findings of SACD research about the absence of safe environment in Syria are placed in the context of the UNHCR’s own criteria – protection thresholds – we see that the vast majority are far from being met, painting a dire picture for any refugees or IDPs forced to return before the minimum conditions are in place. In particular, the thresholds “the physical, legal and material safety of refugees and returnees is ensured” and “every individual’s decision to return is informed and genuinely voluntary, without any coercion” were far from being met, as the SACD’s own research clearly demonstrates. UNHCR must be reporting publicly on this reality, both to the displaced Syrians so they can make informed decisions about return, but also to international policymakers and donors.

UNHCR must take into account the minimum conditions for return defined by the displaced Syrians when determining the minimum standards for return. It must meaningfully engage with Syria’s displaced in conversations on the reform of the Regional Operational Framework and to assess the current thresholds and adjust these in line with their views. UNHCR must also provide clear and timely information about the current conditions, its ability to provide access to and protection of returnees in Syria and refugees in host countries that may be in danger of forced or premature return, as well as the work that needs to be undertaken to meet the minimum conditions for return.

For a detailed breakdown of descriptions of protection thresholds not being met see the attached Annex.