“Syria is not safe for any returns”, says Fernande van Tets, author of Four Seasons in Damascus 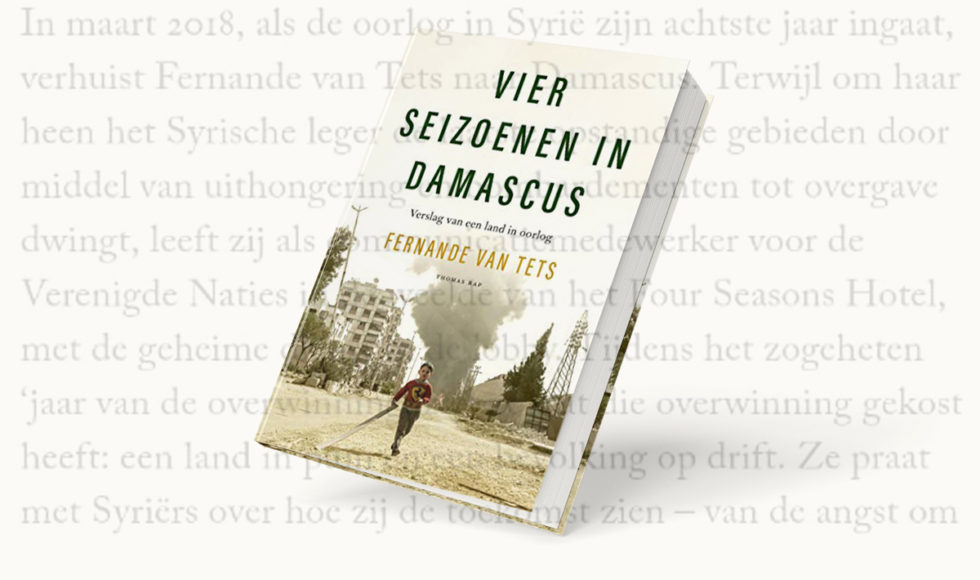 “Syria is not safe for any returns”, says Fernande van Tets, author of Four Seasons in Damascus

Anyone closely monitoring the situation in Syria, and the difficulties that face all humanitarian agencies and workers, is well aware of the United Nations dilemma. Since the beginning of the conflict in Syria, the UN has been fully operating in the country, under the mandate heavily influenced by the Syrian regime, often making the UN operations conditional upon the approval of the Syrian regime, mainly the security branches. Hence, the regime could deny the entrance of aid to areas under its siege, which it deems ‘disloyal’, but it can also direct aid to areas it perceives as loyal. The dilemma here stems from the fact that the UN is fully aware of the regime conduct and of its violations of human rights and war crimes, yet the UN still complies with the regime. Instead of openly condemning the regime’s behavior, for the sake of being able to provide humanitarian aid the UN is forced to turn a blind eye and continue its relations with the very regime that displaced millions of Syrians and destroyed the country in itself.

The Syrian regime is very well aware of its international isolation, and therefore, it uses the dire need of aid to reinstate its legitimacy with international institutions like the United Nations. The UN argues that it is forced to either choose to condemn the regime practices and lose the chance to deliver aid to the needy people, or to overlook the regime practices and bias and reach as much people as possible. At the same time, the perception of the UN as being close to the Syrian regime is not helped when people identified as “UN experts” call for the removal of sanctions on the regime without making a single reference to the fact that they are imposed on regime officials responsible for human rights violations, or when the Head of UNHCR Philipo Grandi visits Syrian families in Eastern Ghouta sending misleading messages about the improving security for returnees to Assad-held areas. Even if we accept that the UN finds it imperative to continue its relations with the regime, it is clear that it can be more responsible with its messaging, especially when it comes to the return of the displaced Syrians, given the fact that Syria is very far from having a safe environment for return.

To further understand this dilemma, the Syrian Association for Citizens’ Dignity (SACD) interviewed Fernande van Tets, who is journalist and author of “Four seasons in Damascus” book. Van Tets is a former communication officer at UNRWA in Damascus who witnessed the UN conduct in the country, their controversial role, and the extent to which humanitarian work was controlled by the Assad regime, with the knowledge of the UN, who had to weigh interests and turn a blind eye to the crimes of the regime. Van Tets resigned as she was discouraged to continue in her position at the UN, especially after she realized that the situation was not getting any better, and she was trapped in a situation where a relief worker can barely do his/her job. Fernande understood the complexity of the situation, but in one of her interviews, she says “Syria is a kind of Stockholm syndrome among aid workers. When you are there, you constantly see things that make you think: it is not right. You go ahead anyway, because you want that help to get a little better. But as soon as you get out of there, you think, this really didn’t make any sense. ” She also adds, “I did not feel that anything was being done with the information available to the UN. You can do something with it in many ways, you don’t have to openly in a press release, you can also raise issues when you speak to directors. As far as I know, that didn’t happen enough. I found that frustrating.”[1]

After leaving the UN, she wrote her book “Four seasons in Damascus”, which provides a rare glimpse into the work of humanitarian workers in Syria and explains the dilemmas that face humanitarian workers there. Through her book, Van Tets says she wanted to send a message to the Dutch government that Syria is not safe and return is impossible.[2]

In its review of the book, Het Grote Midden Oosten Platform writes: “Relief supplies and relief workers are only allowed into an area after total surrender to the regime. Whenever Van Tets left Damascus to visit other cities, she and her colleagues were closely watched and accompanied or not by a government envoy. Speaking freely with the population was almost impossible during such visits, hearing a citizen’s critical story about the regime was downright dangerous for the person in question.

The passages in which the author expands on the constant threat are downright Orwellian. People who disappear for no apparent reason or warning and do not return, a sudden smell of faeces in the street that indicates the proximity of a secret political prison, the fact that during her year in Damascus Van Tets does not dare to disclose anything by telephone to family and friends. friends about the situation, for fear of losing her visa.”

In an interview with SACD, Van Tets explains more about the dilemma facing the UN and her view of the role of the UN in Syria. We also asked Fernande on whether Syria is safe for the return of displaced Syrians, and what is the UN’s role in this matter.

You have decided to leave your position of a communications officer with UNRWA in Syria after only a year. We are well aware of how coveted those positions with the UN are, and lucrative, people do not leave them that easily. Why did you decide to do so?

The UN does incredibly valuable work in Syria, providing aid to millions of people in need. I saw every day what a huge difference the food baskets, cash assistance, mattresses and blankets made to people’s lives. But I also found it difficult to witness injustices and to realise that advocacy had to be limited in order to prioritise access to the people who were in need. For example, if we would be critical of the looting that was going on in Yarmouk, this would mean that our request to provide food and blankets to 6,000 people, who had just fled to the neighbouring area of Yalda, might be refused. This was a constant struggle for me.

You have described in your book and subsequent interviews the dilemma facing the UN in Syria – complying with the Assad regime vs providing aid to the needy Syrians. Can you elaborate on how the UN sees this dilemma?

The UN is present in Syria at the invitation of the government, which is also responsible for the security of UN staff. This allows the government a lot of leverage regarding where international UN staff are able to go. There is a large amount of bureaucracy which allows the government to pull the plug on operations, often using security as the reason. Those in Syria are focused on providing as much aid as possible within the constraints of operating in Syria. UNRWA is an implementing Agency, but most other UN Agencies must rely on local partners to implement programmes. They are unable to do their own needs assessments, or monitor how the assistance is distributed. They must work with a pre-approved list of local partners, and the Syrian Red Crescent is the coordinating party. This means that aid does not necessarily go to areas where the need is the greatest. Often, Damascus will push for priority for areas which have been supportive of the government, and hamper efforts to provide assistance in areas which opposed the government. It’s a constant negotiation.

I think donors are well aware of the difficult situation the UN finds itself in Damascus. And it is much easier to be principled about whether the UN should cease assistance rather than work under such circumstances when you are not there, meeting people who rely on the assistance to survive. 80 percent of the Syrian population now lives in poverty.

How does this dilemma affect the UN’s reporting on the reality of the people who live under Assad’s rule? Do you think the UN is reporting the full picture of this reality to the world?

Operating in Syria comes at a certain cost. Not all language can be used freely, for example the UN will often use terms preferred by the government, such as crisis instead of war. Or it will mention abuses like human rights violations or looting but not name the perpetrator of such offenses. In order to preserve working relations with the government, documents that are drafted in Damascus often are often less explicit than documents that are drafted by other UN bodies outside of Syria, such as the UN Commission of Inquiry on Syria.

You wrote in your book about the surveillance and fear experienced even by the internationals working for the UN and other international agencies, as well as the omnipresent feeling of insecurity, secret prisons, people being disappeared. Let me ask you explicitly – do you think that Damascus, or for that matter, any area of Syria is safe for refugees to return in a safe and dignified manner?

Personally, I do not feel that any part of Syria is safe to return to at the moment. The protection thresholds for return that the UN set out in 2018 have not been met. The voluntary returns that have taken place show that it is not safe to do so. The process of settling one’s security status, such as returnees from Lebanon are required to do, is not enough to guarantee a safe return. Many have been arrested, or sent to serve in the army despite receiving guarantees that they would be exempted. The people I spoke to that chose to return rarely did so on a truly voluntary basis; they were worried, for example, that their property would be confiscated if they did not return to stake their claim. And not everyone is welcome; it is estimated that roughly 20 percent of applications from Lebanon have been refused.

The European Union has been very clear that talk of return to Syria, including the refugee return conference that took place in Damascus late last year, is ‘premature’.

We are seeing that in various courts in Europe members of the security apparatus of Bashar al-Assad are being prosecuted for crimes against humanity. Part of these trials aim to prove the systemic nature of these crimes in Syria. At the same time, we hear politicians speak of the option of returning to live under that system, with the same ruler still in power. To me, this is contradictory.

You have worked for UNRWA and wrote specifically on the plight of people of Yarmouk, the looting by the regime forces and the obstacles people of Yarmouk are facing to return. We have recently reported on how the regime is now passing decrees on “reorganisation” that will see Yarmouk erased as the “hear of Palestinian presence in Syria”. How do you see this situation in the context of regime’s systematic effort to re-engineer the territories under its control?

The demographic changes that the war has brought about is one of the most underreported stories in Syria right now. I think Housing, Land and Property rights are extremely problematic in Syria right now. There is discrimination in terms of who can return where. Former opposition areas are being slated for redevelopment under Law no. 10, making it unlikely that the original residents will be able to return.