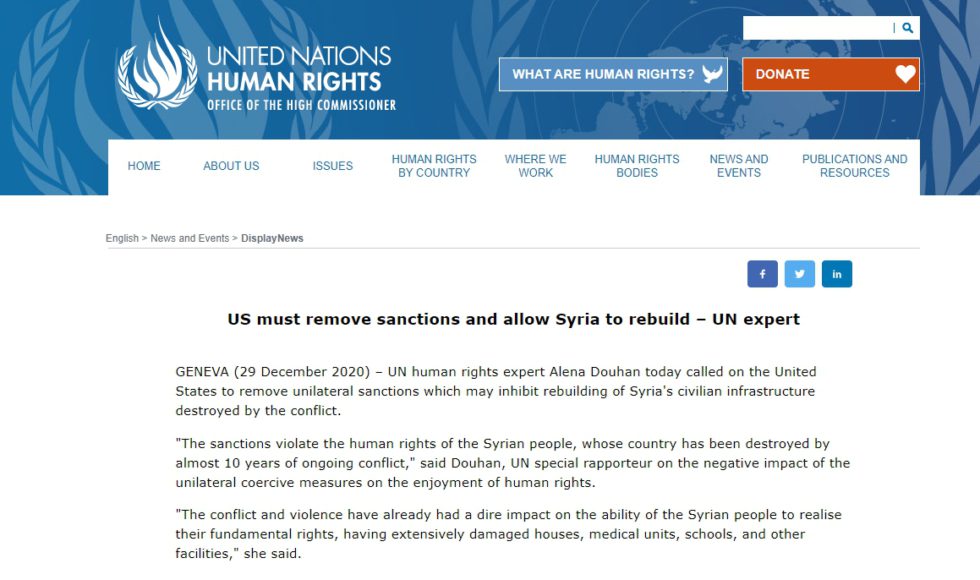 Idlib, 30 December 2020 – The Syrian Association for Citizens’ Dignity expresses astonishment and grave concern, shared by countless displaced Syrians, at the statement of Alena Douhan, a UN human rights expert, in which she expressed positions on return of displaced Syrians and the sanctions imposed on the Syrian regime for human rights abuses, which are identical to those previously stated by the Syrian regime and its Russian allies.

In a statement published on the OHCHR’s website on 29 December 2020, Alena Douhan, a Special Rapporteur on the negative impact of the unilateral coercive measures on enjoyment of human rights, called for removal of the US sanctions against the Syrian regime which were enacted under the Caesar Law[1]. She claimed that “the sanctions violate the human rights of the Syrian people, whose country has been destroyed by almost 10 years of ongoing conflict”, and that the conflict “had a dire impact on the ability of Syrians to realise their fundamental rights”.

It is shocking to millions of victims of the Syrian regime’s atrocities and human rights violations that Ms Douhan failed to mention even once in her entire statement the reasons behind the “Caesar Act” and all the sanctions that have been imposed on the Syrian regime since 2011: the systematic violation of human rights committed by the Syrian regime against the population, and the countless war crimes and crimes against humanity that have been perpetrated by the Syrian regime against civilians over that last 10 years, which led to the killing of almost half million Syrians, the imprisonment and forced disappearance of hundreds of thousands of detainees, and the displacement of approximately 13 million Syrians who constitute more than half of the population back in 2011.

We find it astonishing that Ms Douhan completely ignores several reports published by the UN Commission of Inquiry (COI) on Syria over the last year, linking human rights violations to regime’s policies and practices[2], including the full-scale onslaught on Idlib during the end of 2019 and beginning of 2020. There are numerous other reports by reputable international and Syrian organisations documenting such abuses, but COI’s reports are issued within the same UN’s structure designed to protect human rights – Office of the High Commissioner for Human Rights – that hosts Ms Douhan’s mandate.

We find it extremely worrying that it falls to Syrians themselves to set the record straight and reiterate that the US sanctions, as well as those enacted by the EU, are the only tool used to in some way address the systematic human rights violations by the Syrian regime and its allies.

At the same time, everyone interested in the truth is aware that these sanctions are designed to prevent -as much as possible- any direct impact on civilians. In fact, sanctions on the Syrian regime exclude important sectors to ensure the effects of the sanctions on the regime are not reflected upon the Syrians themselves. The exceptions include granting waivers to the sanctions when the requested economic funds or resources are necessary for providing humanitarian relief, for the purpose of delivering or facilitating the delivery of aid in Syria, and finally excluding medical treatment, medical and nutritional materials, and any agricultural or humanitarian supplies to provide humanitarian relief or assistance to the civilian population[3].

Ms Douhan also claims that the “Caesar Act” may “exacerbate the already dire humanitarian situation in Syria, especially in the course of COVID-19 pandemic, and put the Syrian people at even greater risk of human rights violations”. As the SACD amply showed in its recent reports[4] [5], the regime has been using the Covid-19 pandemic as a pretext to lift economic sanctions and ensure multiple avenues of funding and income to finance its relentless campaign of oppression and human rights abuse. Ms Douhan’s claims, which directly echo the claims made by the regime, were debunked by the UN Office for the Coordination of Humanitarian Affairs (OCHA), where in the Humanitarian Update No. 06 from 17 April 2020[6], OCHA and the World Health Organisation (WHO) mentions providing the Syrian Ministry of Health with Covid-19 tests and other medical equipment to confront the virus.

Furthermore, there wasn’t a single complaint or indication by any international humanitarian organisation of any obstacles impeding the delivery of aid material, medicine or performing tasks in regime-controlled areas due to sanctions.

It was not the sanctions that caused more suffering to the Syrians in relations to the Covid-19 pandemic, but, as reported by many international organisations and the SACD, it is the draconian measures and corrupt practices that the regime put in place while handling the Covid-19 pendemic that were behind the exacerbation of the suffering of Syrians.

But most alarmingly, Ms Douhan, adopted a narrative that the Syrian regime needs to be given access to reconstruction funds in order for return of displaced Syrians to be facilitated. Such narrative has been promoted consistently by the Syrian regime and its Russian allies, most recently at a conference in Damascus which was rightly boycotted by the vast majority of the international community.

As we have documented in our “We are Syria report”[7] based on a survey of 1100 displaced Syrians, more than 90% of displaced Syrians left due to security reasons, while 83% of them considered that dismantling and reforming the security forces in Syria the primary condition for returning, while economic conditions were third on their list of conditions. A new report by the SACD to be released in January 2020 that includes a survey with more than 500 Syrians in regime-controlled areas reveals that approximately half of Syrians in the regime-held areas don’t feel safe, while this percentage goes up to 94% in the so-called “reconciliation areas.” Almost 40% of interviewed participants confirmed that they or one of their relatives was arrested; 82% of them without a court order, and a staggering 74% of participants did not recommend others to return to regime-controlled areas.

While the SACD has always advocated and will continue to advocate for facilitating the delivery of medical and humanitarian aid to Syrians everywhere, especially the displaced, and that sanctions should be targeted and coupled with effective measures to alleviate any collateral effects, we do believe that the international community must continue to exercise pressure that would lead to real change in security and living conditions that would put an end to human rights violations carried out by the Syrian regime.

Lifting sanctions in an irresponsible and ill-thought-through manner would only benefit the Syrian regime and empower it to inflict more abuse and oppression on the Syrian people, and will help the regime to cement the gains and the demographic change that it has pursued through atrocity during the last few years.

Human rights in Syria cannot be asserted by launching a premature reconstruction, but rather by implementing a safe environment for all Syrians. Reconstruction in Syria should be firmly tied to the delivery of a legitimate, comprehensive and sustainable political solution with the required international guarantees and robust monitoring mechanisms to secure a safe environment as defined by Syrians themselves, and that would enable their safe, voluntary and dignified return. UN experts tasked with protection of human rights must be do their utmost to help Syrians achieve these goals, rather than impede them in their struggle for human rights and dignity.