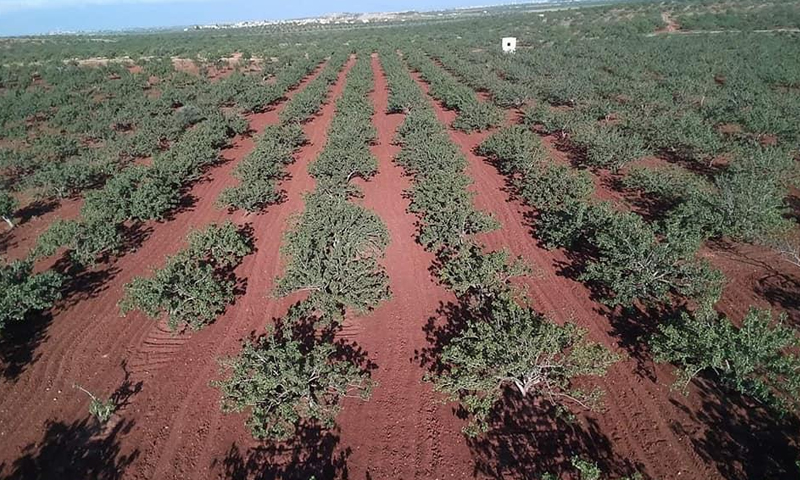 During the last several months, the Syrian regime announced the a series of public auctions and tenders for “investment in agricultural lands” in the countryside of Idlib and Hama. These lands are located within the areas that the regime recently conquered during its onslaught on Idlib, which led to the displacement of most of the area’s population. Much of the land and properties being auctioned belong to the displaced people who fled to the part of Idlib which is not under the regime’s control.

This instance of stripping displaced Syrians of their property to make their return more difficult is not the first of its kind used by the Syrian regime, but it occurs as part of a systemic pattern of violations that affect the property rights of the displaced Syrians, which include infamous laws and decrees such as the Law 10 and others. The pattern is always the same: use indiscriminate attacks and terror to displace the original population, handover the control of these areas to various security branches and militias which continue to oppress those who stay behind and prevent the displaced from safely returning, and then pass laws and decisions to strip the original owners of their properties and re-appropriate them to the regime-friendly businessmen or members of its forces.  These decrees and laws are always made under the guise of “re-organisation” or reconstruction, but, as the case of Hama’s countryside clearly illustrates, their aims are to cement displacement and the resulting demographic change.

In August 2020, Administrative Order Committee issued by Major General Ramadan Ramadan, the regime’s Chairman of the Military and Security Committee in Hama, issued a number of decisions indicating that the lands which belonged to the displaced in the areas under the control of “armed terrorist groups” are to be appropriated. The language used in the order indicates that as the presence of these armed groups in the area is considered a crime, the displaced people who lived there now lose the ownership and the land is to be confiscated and exploited by the regime. The decisions varied in terms of content and mechanism of appropriation, as they merge with several other decisions issued as tenders for “investment” into lands that contain orchards, as is the case in the wooded lands with pistachios in Al-Lataminah – Latamen – Kafr Zita – Zakat. This is another, quite painful form of exploiting the efforts and fruits of labour of the displaced who worked these lands throughout the year, but were displaced by the regime before the harvest. The same thing was done for the olive harvest in the Al-Ghab region.

Fahd Al-Mousa, a lawyer from Hama who is a member of the Syrian Association Citizens’ Dignity and of the Council of the Free Lawyers Union of Syria describes the mechanics of the regime’s effort to take over the land of the displaced in the countryside of Hama and Idlib and present this confiscation as public auctions aiming to “secure investment”. “The people were not notified of the auction and the tenders by any official notice from the regime, but the lands and houses were seized by a decision from the security committee in Hama headed by the Major General Ramadan Ramadan, who comes from the village of Al Mahrousa in the countryside of Masyaf. This was done in conjunction with the Ba’ath Party branch, the Shabiha Committees, and the National Defense Committees. The displaced owners found out about it through the announcement of the Mahrada Ba’ath Party Division on its Facebook page, through social media, or from their relatives who are still in the regime’s areas. Most of the displaced and refugees from these areas cannot return to their cities, towns and homes because they would be wanted and torture, abuse, executions, and assassinations by the Assad regime’s intelligence services, government forces, and sectarian and Iranian militias such as Hezbollah.”

Between hammer and anvil

Al-Mousa describes the situation in Hama, which is faced by the vast majority of displaced Syrians: if they return to areas under the regime’s control they will be in grave danger, but if they don’t they risk losing all they have. The displaced owners of properties were never notified of what will happen to their land or home, but they only found this out through social media once it is too late for them to do anything to claim the ownership or try to prevent the confiscation through legal means, which clearly shows the deliberate nature of the regime’s policies. In this case there was no deadline given for the displaced to return to those lands or take any legal action. Al Mousa explains “The regime considered that all the displaced and refugees as terrorists because of where they lived and that they should be punished by the seizure of their property.”

Some people tried to send their relatives in an attempt to stop the process of exploiting the lands or putting them up for public auction.  Malak Zafer Al-Saad, who was forcibly displaced from Maarat al-Nu`man, says that several people attempted this but failed, and that the relatives who tried to intervene faced attacks and arrests. Al Mousa confirms: “Some relatives of the displaced owners tried to intervene on behalf of the owners of the lands and homes, or tried to harvest the crops, but the military security summoned them and threatened them with arrest if they found them again on the lands seized by the security committee.”

The conundrum facing the displaced Syrians who are victims of the regime’s policy of property confiscation illustrated in Hama confirm the findings of SACD’s report “Between Hammer and Anvil: Motives and Experiences of Syrians Forced to Return to Assad-held Areas” issued in 2019. The report established that among the small number of displaced Syrians who decided to return to Assad-held areas despite grave security risks, some 25 per cent of all respondents were driven by the fear of the property being confiscated by the regime. It is indicative that the largest number of those came from Rural Damascus – 42% – which is attributed to concerns over the regime’s “real estate development” laws in this area, including the Law 10, which were passed with the aim of appropriating properties of people from areas conquered by the regime and cementing the demographic change. This statistic is particularly important as the number of people risking their safety to return increased after the regime forces imposed their full control and started issuing decrees such as the Law No. 10. This indicates the possibility of such scenario repeating in the countryside of Hama and Idlib after the latest confiscations, which would put people in a seriously dangerous situation, where they have to choose either to return and risk their lives in the absence of guarantees that guarantee their safety or leave their property in the wind. Our other report, “Vengeance, Repression and Fear: Reality Behind Assad’s Promises to Displaced Syrians” documents the danger of arbitrary arrest, enforced disappearance, forced recruitment and other forms of insecurity facing the displaced who decide to make this desperate step to try and save their properties.

Majority of the displaced Syrians see these actions of the regime as the final push to make their displacement permanent. It appears that the regime is working to exploit the inability of the displaced people to return to pass various policies against them and destroy their last remaining hopes of returning to their country. Al-Mousa explains: “The looting of the property and lands of the displaced, as all homes in these areas were looted, whether they were the homes of supporters or opponents, the exploitation of orchards and vineyards and the harvesting of crops, and these areas were considered a closed military zone for several months until the looting was finished by the regime forces with participation of the National Defense Committees. This was done as a punishment for the people of these areas.”

And while it is clear that the Syrian regime is using discriminatory legislation and executive orders of the kind we described in this text as part of the implementation of its policy of forced displacement and permanent demographic change, the displaced Syrians and international community must be aware that the reality create by force and discrimination will have to be reversed for any hope of stability and peace in Syria. For this we can draw on the international legal framework which guarantees the property rights of displaced people everywhere and the recent lessons from context where such policies were implemented, such as Bosnia and Herzegovina. There, the Bosnian Serb leadership implemented almost identical policy of property appropriation and confiscation from Bosnian Muslims and Bosnian Croats who lived in areas conquered by Serbs. Land and properties were confiscated, laws were passed to distribute them to Serb fighters and tycoons, in almost identical fashion to that practiced by the Syrian regime. However, these policies were reversed in the Dayton Peace Agreement, specifically its Annex 7, which dealt with the rights of the displaced Bosnians. As part of this framework, a Commission For Displaced Persons and Refugees was formed with the specific task of resolving property claims in cases where the property of displaced people was confiscated or appropriated.

The Commission was empowered to receive and decide any claims for real property in Bosnia and Herzegovina, where the property has not voluntarily been sold or otherwise transferred before the start of the war in Bosnia and where the owner was not in possession of the property at the end of the war. The Commission’s powers are illustrative of the practices which were very similar to those of the Syrian regime and worked to reverse these policies in favour of the rightful owners. It received claims and was empowered to ensure that any person requesting the return of property who is found by the Commission to be the lawful owner of that property was awarded its return. Any person requesting compensation in lieu of return who was found by the Commission to be the lawful owner of that property was awarded just compensation as determined by the Commission. Very importantly, in determining the lawful owner of any property, the Commission did not recognize as valid any illegal property transaction, including any transfer that was made under duress, in exchange for exit permission or documents, or that was otherwise in connection with “ethnic cleansing,” which is a mirror policy to that of the demographic change policy implemented by the Syrian regime.

*Cover Photo: Agricultural land in Hama countryside is being confiscated from displaced people