From the heart of the capital Damascus: “We lost hope of returning to our homes, and we are trying to leave in search of a decent life.” 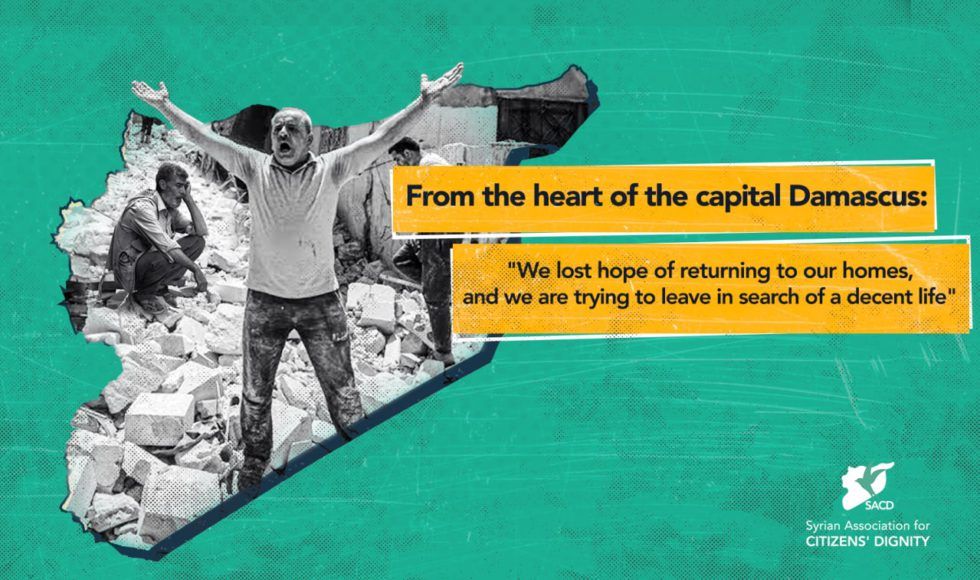 From the heart of the capital Damascus: “We lost hope of returning to our homes, and we are trying to leave in search of a decent life.”

In the search for feasible solutions that guarantee the safe return of nearly 13 million displaced Syrians, it is necessary to point out that the various methods of forced displacement that the Syrian regime and its Iranian and Russian allies have pursued since 2011 were not merely a result of the conflict. Rather, it was a systematic plan, whose origins can be traced to the era of Hafez Assad, to achieve demographic change in pursuit of a strategic goal of what Bashar Assad later termed as ‘useful Syria’.

When the sounds of heavy artillery subsided in Damascus and its countryside, nearly four years ago, as the Syrian regime forces restored control over these areas of Syria through violence and force, the sounds of explosions were still heard from time to time. Yet unlike previous years, these explosions were controlled, with the explanation from the Syrian regime that they were clearing the area so it could be rebuilt.

One of these areas is the Qaboun neighborhood, strategically located at the entrance to the capital, Damascus. In 2017, nearly five thousand Syrians, those who refused to sign reconciliation agreements with the regime, were displaced from Qaboun neighborhood to Idlib suburbs. Since then, the neighborhood’s buildings were subjected to demolitions and turned into rubble, under the pretext of getting rid of mines, tunnels, and ordnance unexploded.

The Syrian regime announced that the Qaboun neighborhood in Damascus would be subjected to Law No. 10. The state media pointed out that the Damascus governorate is considering the inclusion of the industrial zone in Qaboun, in addition to Jobar, Al-Tadamon and Al-Mazzeh 86, to reorganize it within the law 10, which Syrian Lawyers interpreted as mere confiscation of the properties of the displaced who are unable to return to their homes which are currently under the control of the Syrian regime.

A.H. is a former state employee who was forced with his family to leave his home in Al-Qaboun in 2012 towards the capital Damascus. He left behind his younger brother and neighbors, who remained in Al-Qaboun until they were forcibly displaced in May 2017.

The Syrian Association for Citizens’ Dignity interviewed (A.H.) to record his story of displacement and report on what is happening in Al-Qaboun neighborhood.

Can you tell us where are you from and where is your family situation right now?

I spent my life in Al-Qaboun neighborhood until I was forcibly displaced from it in December 2012. I currently live with my wife and sick mother in a neighborhood in Damascus city. My elder brother lives in another neighborhood in Damascus. Back then my younger brother was serving in the military in Homs. He defected in 2011 and fled to Al-Qaboun to stay with us but was forced to remain on the run as he was escaping checkpoints and house raids. He was forced to leave to Idlib in 2017 and then eventually made it to Turkey.

It is worth mentioning that there were a few civilians, who were not allowed to go out, and resided in their homes despite the lack of necessities of life, and scarcity of foodstuffs. There was some destruction of some buildings, but they were still habitable.

Were you planning to return?

We were impatiently waiting for situation to calm down and go back to living in our home. It has been our dream since the day we left. After the displacement agreement, we repeatedly tried to enter the neighborhood to see if we could return to live in it, but our request was always rejected by the checkpoints surrounding the neighborhood on the pretext of security necessities, and that the area is dangerous and unsafe to return. I was eventually able to obtain a security approval and entered in 2018, but I could not find any house, neighborhood, or any of our old memories. Our area consisted of blocks of rubble and destruction.

Do you mean that your house was demolished after the displacement agreement?

Yes, certainly, because my brother got married and stayed in our house until he left for the north. He even told us about his things and household items, which he left inside, including furniture.

Do you have any information on why homes were destroyed like that?

After the displacement of people, we used to hear sounds of explosions, given that our place of residence is close to the Al-Qaboun. We were following the statements of the official media of the government, that on such a day the remnants of mines that the militants left behind will be detonated.

Indeed, on the appointed day, we heard the sounds and saw the rising clouds. When I entered the neighborhood, it turns out that what was being detonated were the civilian buildings in an old part of the Qaboun neighborhood, including our homes.

Those who witnessed the remnants of the rubble and the destruction that occurred could easily conclude that the explosions did not cause this destruction, but the buildings were merely bulldozed by bulldozers. There were no explosive remnants of war.

What do you think is the reason for the regime forces to demolish these homes?

First, it is no secret to anyone from Damascus and Qaboun that the neighborhood is located within a block of military barracks belonging to the Syrian regime forces. It was the first thing targeted by the opposition factions. Hence, the demolition was sort of a revenge.

Another reason that the opposition factions for a long time refused to submit to an armistice or reconciliation agreement, unlike what the factions did in the adjacent city of Barzeh. Therefore, Barzeh did not witness the destruction that Qaboun witnessed.

What is the current situation in the neighborhood?

There are checkpoints surrounding the neighborhood. They do not allow anyone to enter at all except after obtaining a security approval, which is difficult to obtain except through intermediaries and bribes, and if obtained, it allows visits only. There are a few families, who live on the outskirts and are not allowed to go out without security approvals. The living conditions are still very bad, and the simplest necessities of life are not available.

Can you rebuild your house or do restorations?

Return is not allowed, so how can we rebuild the house? After the issuance of Law No. 10 of 2018, which focuses on the reconstruction process, and its implementation in 2019, the Damascus Governorate requested that we submit papers to prove property ownership so that we would be given shares in the new organizational schemes.

What are the required papers? Did you submit papers?

Fortunately, when we went out, we had taken our important papers, including property documents, and bills. So, we were able to provide the required papers (title deeds, personal IDs, a clean criminal record certificate, a clearance certificate that we had paid all our financial obligations such as bills for the entire period, which we were in mainly outside the neighborhood). Unfortunately my cousins could not prove their ownership because they did not have the necessary documents.  Consequently, property that has not been claimed or for which no ownership has been proven will be handed over to the local council or the state itself according to Law 10 of 2018. Since we submitted the papers nearly two years ago, the regime has not moved a finger and the neighborhood situation is still the same with rubble and destroyed buildings. When we inquire, they say there is nothing yet and that we must wait. So far, none of the promises made have been fulfilled.

What is your hope for the future?

We hope to return to our neighborhood, after the displacement agreements, to get rid of the burden of renting that burdened us and the difficult life in all cities, including Damascus. Despite the government propaganda that the ‘war’ is over, it is very hard to make ends meet in areas under regime control. I often thought about immigrating to Europe, as is the case with many, but my mother’s illness prevented me from leaving. The most difficult thing is that I need permission to leave and to obtain this permission I have to pay large sums of bribes.

Finally, we hope that justice will prevail in Syria, that rights will return to their owners, and that we and many of those in the same situation can return to our homes and lands and live a normal, dignified life.