Can elections be held in Syria in light of the displacement of half of the Syrian people and the absence of any political solution?

Can elections be held in Syria in light of the displacement of half of the Syrian people and the absence of any political solution?

In light of the conflicting agendas of the parties interfering in Syria, the absence of any vision of the form of a political solution, and the Syrians’ distancing or alienation from the deliberations taking place between those countries to develop a vision for this solution, some of the countries interfering in Syria seek to market the negotiations that are taking place on the constitution between the regime and some figures who are identified with the opposition as the way to find a sustainable political solution. Those negotiations over the constitution form a clear violation of the international resolutions stipulated in the Geneva Declaration of 2012, since all these talks do not take into account the conditions for the return of refugees and displaced persons, nor do they take into account the views of Syrians who have the right, and to whom the final decision to return and stability in future Syria returns. Therefore, it is impossible to reach any settlement or political solution aimed at ending the war in Syria, without prioritizing the return of refugees.

However, the complexities of the Syrian situation and previous international experiences indicate that achieving sustainable peace requires greater focus on the challenges related to the actual reality of the return of refugees and displaced people, who are about 13 million (more than half of the Syrian people), including providing security guarantees and protection for them without facing these challenges. Otherwise, whatever the form of the political solution, the return of refugees may not be possible, or it may not be sustainable, which will negatively affect the establishment of peace in Syria, the neighboring countries, and a number of other countries.

The Geneva Declaration in 2012 and Security Council Resolution No. 2254 of 2015 affirmed the same vision of the necessity of securing a political solution that would guarantee the safe and voluntary return of Syrian refugees.

At this time when the Syrian regime is seeking to conduct presidential elections in accordance with the constitution that it issued in 2012, we have the right to ask the following question: Can elections or referendums be conducted in a free and fair manner that is compatible with democratic standards under the current circumstances? And if elections are held without any significant change in the prevailing circumstances, can these elections have legitimacy?

Elections are nothing but the last episode in the political process, as they are preceded by complex stages that can never be surpassed and conditions that cannot be overlooked to ensure free and fair elections. Elections need security, peace and stability accompanied by a political freedom that allows people to filter candidates and to choose them freely. It gives candidates the freedom to present their electoral platform and gives the ability to observe the electoral process by representatives of the candidates and representatives of international organizations.

Up to the date of writing this article, the constitutional, legal and logistical conditions currently prevailing in Syria constitute an obstacle to holding free elections, and the most important of these obstacles is that this authoritarian regime continues with the same old mentality of insisting on following the same methods that led to the destruction of infrastructure in Syria, killing and imprisonment of hundreds of thousands, and displacement of more than half of the Syrian people.

Perhaps one of the most prominent constitutional obstacles is what is stipulated in Paragraph 5 of Article 84 of the current Syrian constitution that the candidate for the presidency of the republic “resides in the Syrian Arab Republic for a period of not less than 10 consecutive years upon his candidacy.” It is self-evident that this paragraph automatically excludes about six million refugees who have been forcibly displaced outside Syria from their right to run for presidency.

According to Article (85) Paragraph / 3 / specifically of the current constitution, “The candidacy application is not accepted unless the candidate obtains the support of at least 35 members of the People’s Assembly, and no member of the Assembly is allowed to support more than one candidate.”

Depending on the composition of the Syrian People’s Assembly, which is under the complete control of the regime, and whose members are chosen by the security forces, it is certain that this article prevents any candidate who does not have the blessing of the ruling Baath Party from achieving the conditions for candidacy.

Syrians residing outside Syria can only participate in voting under the current election law in the Syrian embassies and according to the voter registry approved by the Syrian regime, and according to very difficult procedures. This requires the presence of a valid passport and the presence of an exit visa from Syria from the outlets controlled by the Syrian regime. Observers of the Syrian issue know the fact that most of the displaced left the country from border crossings that are not controlled by the government of Bashar Al-Assad, and that most of the displaced do not have documents and suffer from great difficulties in obtaining documents. The Syrian passport has been classified as the most expensive passport in the world, with the cost of 800 US dollars to obtain a passport from the Syrian embassies.

Under this situation, the Syrian regime does not allow Syrians to return voluntarily, safely and with dignity, which means that elections cannot be held without a safe environment suitable for this, and this can only be achieved by achieving the minimum conditions for a safe environment, including the constitutional and legal requirements for holding elections. And the achievement of security stability, and it is possible to benefit from the experiences of holding elections in countries that have gone through conditions similar to those of the Syrian people, such as the experiences of Bosnia, Iraq and Afghanistan. This does not mean literally reproducing those experiences. Each country has its own peculiarities, but there is a similarity in terms of the international community’s keenness to create an appropriate environment before conducting any electoral process.

The most important thing is that the Syrian people are not convinced of the usefulness of participating in any elections. Syrians’ collective memory has been entrenched that participation in the elections is useless in light of dozens of electoral experiences that have taken place since the Baath Party seized power in Syria, and this is confirmed by the opinion poll conducted by the Syrian Association for Citizen’s Dignity (SACD) about the elections. As 53.5% of respondents reported that they voted in the past, before displacement, because they were “forced to do so,” only 4.8% voted with complete conviction, and 84.4% of all respondents said they believed that all elections held by the regime before 2011 were “fabricated”. In addition, only 1.8% of the respondents expressed the possibility of forming a Syrian government under the current circumstances that would be able to hold elections. On the other hand, 42.4% believed that a future Syrian government cannot be trusted to conduct elections except after a “political solution” and 41.4% that it can only be after a complete “political transition”. This is a very important indicator of the possibility of the Syrians participating in the elections, because even after a political solution and the conditions for a safe environment are achieved, the Syrians will need to change the political culture and change the damage that affected the notion of ​​elections under more than 50 years of Assad’s rule in Syria.

Conducting any elections without political awareness campaigns and spreading the culture of the right to vote and the necessity to participate, would be pointless for people with a preconceived notion that the elections are useless, unreal and fake.

Based on the foregoing, no elections can be held that express the opinion, will and desire of the Syrians without being preceded by a political solution, followed by a politically, socially and economically secure environment, and other conditions that must be met as stipulated in United Nations Resolution 2254, the Geneva Declaration, the International Covenant on Civil Rights and the European Union Convention for the protection of human rights and fundamental freedoms in a political solution agreed upon by all parties.

All of this, if achieved, will not be possible without the participation of Syrians who need to increase credibility in the elections, persuade them and make them aware of participation, and this will only be achieved when the Syrians see that they have not been forced into any political solution and that they will not return to a state thriving on tyranny and murder.

Cover photo: Bashar Assad’s photos displayed in areas he gained control of after displacing most of the population © Reuters 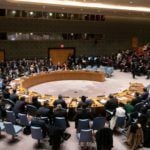 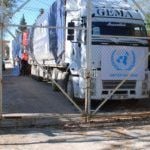 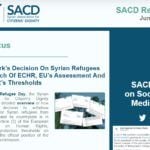