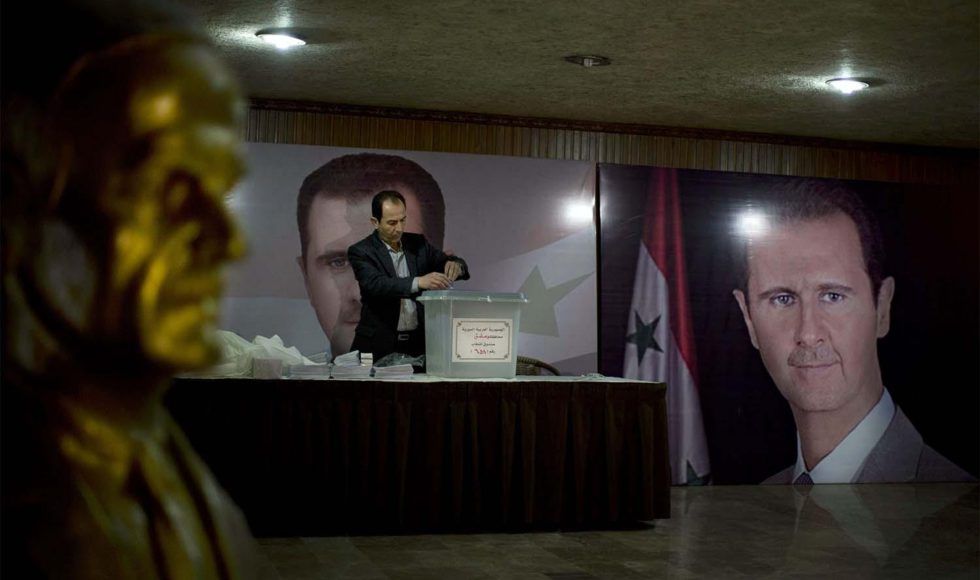 The majority of Syrians living in regime-held areas do not feel safe due to the regime’s security policies and the repressive grip of its security apparatus. People living in these areas are subject to arbitrary arrests, forced disappearances, harassment, extortion, beatings and torture of people even suspected of having anti-regime sentiments; attacks and military sieges against areas seen as anti-regime continue. People are disappeared for posting a critical Facebook status or for trying to reclaim their property. The security situation is made more complex by the fact that Syria is currently divided into three main areas of control: regime-held areas, opposition-controlled areas and areas controlled by the Syrian Democratic Forces. Each has different security and governance situations, but none has even the minimal security conditions for free and fair elections.

The rights and freedoms of Syrian detainees have been violated on a daily basis for the last 10 years. At least 130,000 Syrians are currently being detained for opposing the regime, and many more have been forcibly disappeared. 82 per cent of the 1,100 displaced Syrians surveyed by SACD asserted that the unconditional release of detainees and revealing the fate of forcibly disappeared individuals were fundamental conditions for their safe and dignified return. If elections are conducted without addressing the most significant breaches of rights and without addressing the situation of the remaining detainees Syrians will not consider any future ballots to be legitimate.

More than 80 per cent of the refugees surveyed by SACD paper who expressed interest in voting reported that they would not feel safe voting in Syrian embassies and consulates. This is because the Syrian regime uses embassies as bases for its intelligence operations against Syrians abroad to monitor, intimidate and in some cases assassinate dissidents. Syria Justice and Accountability Centre revealed documents that prove how the regime’s intelligence agencies systematically monitor the activities of Syrians abroad, often punishing dissidents’ families for any criticism of the regime. These documents demonstrate that host countries are unable to protect Syrian refugees from the regime’s retribution, and that embassies are being used as a key tool in this continued repression.

Article 84, paragraph 5 of the current Syrian Constitution states that presidential candidates must be a “resident of the Syrian Arab Republic for no less than 10 years continuously upon being nominated”. This automatically excludes some six million refugees who were forcibly displaced outside Syria.

Article 85, paragraph 3 states that “the candidacy application shall not be accepted unless the applicant has acquired the support of at least 35 members of the People’s Assembly; and no member of the assembly might support more than one candidate”. Considering the make-up of the Syrian Parliament, which is under the complete control of the regime and Assad’s Baath Party (which has a guaranteed majority) and the regime’s intimidatory behaviour, this makes it virtually impossible for any candidates perceived to be opposed to the regime to participate in the elections.

Although the Elections Law provides for a National Voting Registry, some local officials use registration lists but in other locations anyone with an ID can vote, which allows significant manipulation of who can vote. Embassy voting requires a valid Syrian passport with an exit stamp, which the majority of Syria’s displaced do not possess, don’t have access to embassies or fear of being targeted by the regime staff at embassies. The vast majority of Syrians had to flee their original homes due to persecution by the regime’s security forces and/or the constant bombing of their residential areas during a time when the regime lost control of most key border crossing points. All these circumstances forced Syrians to flee without an exit stamp.

Bilateral protocols and memorandums of understanding will need to be signed to allow Syrian refugees to vote in special arrangements from countries that do not permit external voting except in embassies. Other issues facing refugees would need to be resolved, such as the form of ID to be used for registration. For instance in Lebanon, hundreds of thousands of Syrian refugees are not registered with the UNHCR or the state and are legally prevented from (or feel unsafe) doing so. Many refugees do not possess valid ID documents, and their ability to access them varies wildly between host states. The situation of the IDPs—both within and outside regime-held areas—is further complicated by a host of unresolved issues, including where are they eligible to vote (original place of residence or current location), registration of those who became eligible to vote while displaced, and the lack of voting infrastructure in displacement camps.

The process and infrastructure must first be agreed upon and operationalized. As the previous UN Special Envoy to Syria Staffan De Mistura pointed out in 2017, it will take at least three years to prepare for the elections. No work has been done since then. So even with all the ad hoc solutions that could be logistically applied, it will not only be impossible to make voting available, free, and transparent for all Syrians abroad and internally displaced without a sound, comprehensive political agreement that guarantees the right of all Syrians to vote freely; it will also take time to enact.

Displaced Syrians are clearly sceptical of the notion that the current regime could be involved in running any future elections. Only 1.8 per cent of participants in SACDX survey trusted the Syrian government to hold elections in the current circumstances. By contrast, 42.4 per cent believed a Syrian government could only be entrusted to run elections after a “political settlement”, and 41.4 per cent only after a full “political transition”. The majority of people surveyed for this paper indicated that future elections should be administered by local election bodies, under international supervision, rather than the central government.

When asked about the three most important changes that need to happen in order to generate trust in the election process and outcome, respondents replied:

Surpassing the obstacles to free and fair elections requires international support and a comprehensive framework that Syrians perceive to be legitimate. Such a framework can only be implemented as part of a comprehensive and sustainable political solution that guarantees a safe environment for all Syrians, including the displaced. Such a safe environment should include fundamental security, constitutional and Elections Law reforms. Syrians will view any attempt by the international community—through the UN or other international actors—to push for elections before a safe environment has been achieved as a move to legitimize the current head of the regime.