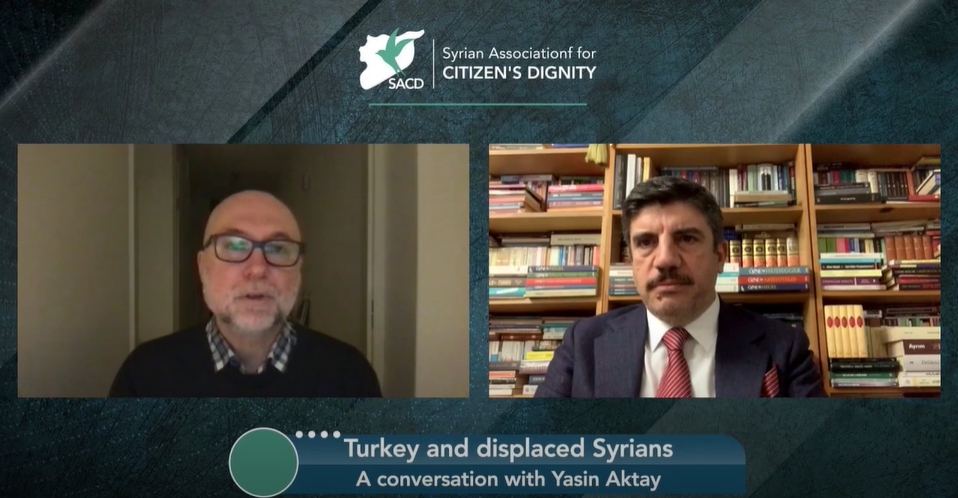 In a series of conversations with current and former officials and experts from countries whose policies have major impact on displaced Syrians, journalist and transitional justice expert Refik Hodzic will seek to illuminate some of the key policies, decisions and plans of these countries. The logical start in this series was Turkey, the country that hosts the largest number of Syrian refugees, has more than 900 kilometers of border with Syria and is one of the most consequential actors in the Syrian conflict.

In this interview, Yasin Aktay, a sociologist, social activist, Deputy Chairman of the ruling AK party in Turkey, and chief advisor to the President of Turkey, Recep Tayyip Erdogan, explains Turkey’s position on a number of issues impacting displaced Syrians, including the prospects of safe and dignified return to Syria, the integration of Syrians in Turkey, Turkey-EU relations on the issue of refugees, and Turkey’s vision of a political solution in Syria.

Aktay explains that in his view the integration of Syrians into Turkish society is advancing. “These Syrian people are now part of Turkey. We cannot assume that one day they will go back to their country. But even if they do, they will probably come and go. Many married Turkish citizens, and others got Turkish citizenship. Some settled and started their businesses here. This cannot end in a short time, even if the conflict in Syria ends. Turkish society is sometimes confused about function of the Syrian people in the country. I am personally not confused. I have a clear idea about their role and function in the society. They are playing a positive role in the Turkish economy. We should remember that it is not difficult [to achieve integration] with these people, especially in southern Turkey, which has same configuration of population there. In my hometown in Siirt, Kurdish, Turkish and Arab people are living together in a very strong multicultural society. These populations have relatives on the other side of the border, and the culture is not very different. In addition, Syrian people are very good hard workers, they are very clever and smart, especially their children in schools, they are very successful in their studies, and they will play a very positive role in the development of Turkey.”

When asked about the relations with the EU regarding the refugee crisis and Turkey’s operation in the north of Syria, Aktay was critical of the EU approach: “The Syrian problem is not the problem of Turkey only, but the problem of Europe. All refugees have an ultimate goal of going to Europe, yet Turkey is still hosting them. The EU is not honoring all its responsibilities with regards to refugees in Turkey, and they do not share the burden with Turkey, who is left alone. The agreement between Turkey and EU is good for EU but not for Turkey. The burden should be shared, but the Europeans are not.

Turkey called upon Europeans to unite and have a common stand against the regime in oder to make peace there. But what Turkey was trying to do in Syria and build a free zone in order not to receive all refugees inside its border, we did not receive respect, let alone support, from European countries, even though there were attacks from PKK, YPG and ISIS against us. But we didn’t see any solidarity against these attacks. But when Turkey tried to take preemptive measures, we saw European countries criticizing Turkey and blaming it of occupying Syrian lands. What Turkey wanted was a free zone and to stop refugees from coming into Turkey and Europe. They ask Turkey to be a tampon area, or a zone to make refugees wait or settle in Turkey, as if Turkey is protecting EU, but we don’t see support from European side.”

In a very open conversation, Aktay responded candidly to several other questions.

On the vision for a political solution in Syria:

The solutions to encourage Syrian people or to create safe conditions for Syrians to return back to their homes, is welcome to Turkey. Unfortunately, it is very difficult to convince the innocent people who were bombed to trust Assad regime. And as long as Assad regime is alive and is ruling the country, I don’t think the people will trust him and go back, especially that the conditions that forced the people to leave the country did not change. What is the guarantee for them that someday they will not be bombed again, tortured and their dignity will be violated in very savage ways? The Assad regime is known for its inhumane tortures in prisons, and deserves to be tried in human rights courts. If Russia has any formulation to convince all the people, let it try. But I don’t think they can convince all people. In official language, they can say people can go back. But if the situation does not change, it is very hard to convince the people. This fragility will not create situation for safe, convincing and plausible situation for going back.

On the possibility of a safe and dignified return of Syrian refugees from Turkey:

I think it is not possible to create this safe environment with the presence of the regime. The people will prefer not to go back because they have found better life conditions in host countries, instead of taking the risk and going back to Assad-held areas.

Turkey is trying to create the conditions and environment which will be very attractive for them to go back. But right now, it does not look attractive to them, and Turkey will not force people to go back neither hinder them from returning. It is even part of international law not to force them to go back.

Whatever we are doing now is a temporary solution, because Idlib became a shelter for all people who fled from Assad bombing. What’s happening in that region is an indication of all the wrongness and bad things happening in Syria because of the regime. In other areas, some fled from the PKK/YPG or even from ISIS, or American attacks or Shia militias of Iran. All these people found shelter in Idlib, and from 500 thousand people, the number increased to 3-4 million people.

In addition to the six million people who live in Turkish operations regions, four million Syrian people live in Turkey, so ten million Syrian people are living under Turkish government, receiving Turkish aid and support where Turkey is undertaking their livelihood and social services. All this should be taken into consideration when thinking of who has the right to talk about Syria.

Turkey has the most important role and right to talk about this. Turkey’s priority is not to invade or dominate somewhere. The priority is to save lives of civilian people in Syria and introduce basic human rights to them. The existing situation in Idlib is temporary, and we hope and try to develop a new constant political solution which will help build a new Syria by its own people and to leave Syria to Syrians and not let any other parties occupy Syria. It is not normal that a large number of people are living in such a small area, this is why many people are trying hard to come into Turkey, which is relatively better for them.

Watch the full interview with Yasin Aktay with these and other questions here: