Syrians want to return, only when it’s safe 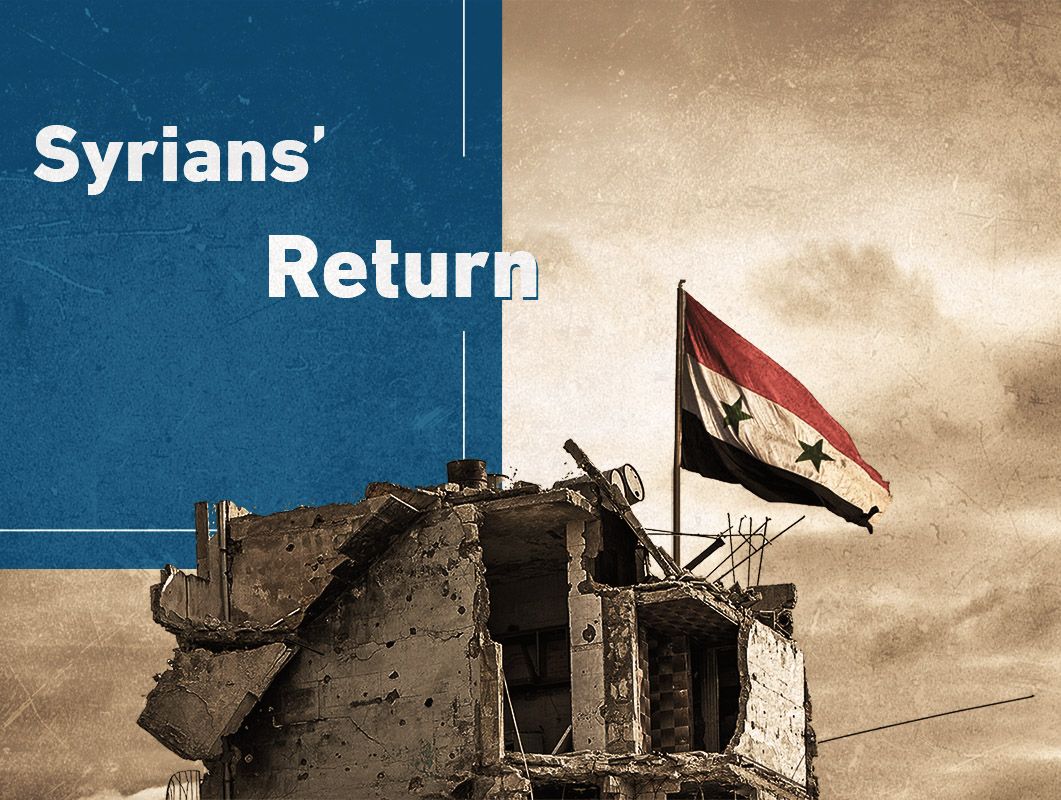 Syrians' return - Syrians want to return, only when it’s safe

People think it's not safe for return, but think return is a necessary for the future for the country and any political settlement.

The latest survey report, Normalization of Horror, has shown that only 26 percent of participants recommended displaced people to come back to regime-controlled areas and approximately half of participants are seeking to leave such areas; there is still an overwhelming belief in the need for displaced people to come back and play a major role in the reconstruction and stabilization of the country. 70 percent of the participants think that the return of the displaced is a prerequisite for Syria’s recovery.

Living conditions have declined, with purchasing power plummeting and living costs rising. People are cobbling together multiple forms of income to make ends meet. Despite this, they watch regime patrons reap the rewards and are forced to pay bribes for services.

Despite the current situation in Syria, the regime and Russia have been promoting a reassuring narrative about the end of the conflict, a return to normality, and the possibility of the return of displaced people in an effort to encourage reconstruction funding and undermine the political process. This section explores the intentions and views of those in regime-controlled areas about their residency and desired location now and in the future. Nearly half (49 percent) of the participants indicated that they want to leave their current places of residence within areas controlled by the Syrian regime (Figure 33).

Note: figure shows participants’ responses to the question “Are you thinking of leaving your current residence?“

Participants’ reasons and motives differed in their search for possible ways to leave. Respondents highlighted the following reasons (they could select more than one) (Figure 34).

Figure 34. Respondents’ reasons for wanting to leave their current residence

“The most important reason is that I want to live in a country that is not ruled by the Assad family and those like them, in a country where my dignity and my rights are preserved.”

When asked about advising displaced persons whether to return to the country, only 26 per cent of respondents indicated that they encouraged people who left Syria to return (Figure 35). They did so because they believe their return can help improve the country’s situation as most skilled people and experts had left the country.

Figure 35. Opinions on whether others should return

Note: figure shows participants’ responses to the question «Do you advise displaced people to return?»

Approximately 70 percent of participants believed that the return of displaced Syrians is a key issue for the future of the country (Figure 61). This number acquires more relevance if put into the following context:

Figure 61. Importance of the return of displaced populations

Note: figure shows participants’ responses to the question “Did the sanctions have a negative impact on the way the country
is dealing with the Corona pandemic?”

All participants were given the opportunity to express their opinion on the country’s ability to achieve a stable peace and rebuild the country. Their views and answers varied as follows:

Removing the Assad regime, forming a democratic government, rebuilding the state and distributing its wealth fairly.

Prevention of arms, peaceful transfer of power, return of Syrians and reconstruction of Syria by Syrians.

By building bridges between the people of the country, restoring rights to their owners and addressing outstanding national issues.

Participants’ views regarding the future and potential solutions and personal perceptions varied widely:

If the Syrians return, Syria will be fine, and if they don’t come back, it’ll stay orphaned.

A good and bright future if the regime and government are changed, a real state is built, the return of IDPs and refugees as well as the reconstruction of the country.

The near future is very bad because the country is currently under occupation from different sides, but we hope that it will be better in the distant future.

Most of the study participants (72 per cent) expressed support for a political solution that changes the behaviour of the security apparatus and its policies (Figure 26). This result further reinforces the outcome of the survey performed as part of the June 2020 We Are Syria report, which found that 73 percent of the participants (all displaced outside regime-controlled areas) insisted on the need for changes in the policies of the security forces—an almost identical percentage to the Syrians currently in regime-controlled areas. Such a change must be factored into any political settlement. They also cited a political solution as being essential for refugee return and were willing to tolerate ongoing economic hardship if it resulted in a solution to the crisis.

Note: figure shows participants’ responses to the question “Do you support a political solution that reforms the security
system?“