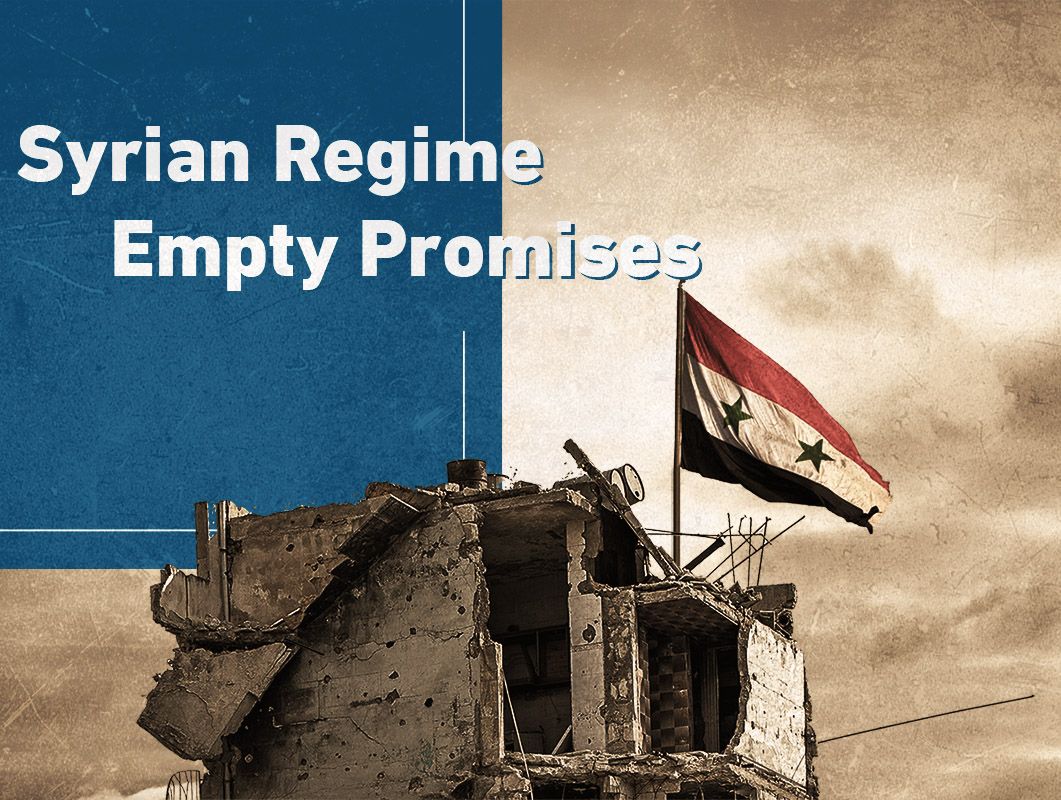 Syrian regime’s and Russian guarantees mean nothing in practice.

Campaigns of arrest and enforced disappearance are still ongoing in Syria, including against those covered by “reconciliation agreements” and those who have been included in regime-issued amnesty, which highlights a lack of any kind of security guarantee in Syria. 19 per cent of those arrested were covered by amnesty while 26 per cent were covered by “reconciliation agreement”. The amnesty laws are almost illusory, used to falsely demonstrate goodwill without the real release of those detained for political reasons and do not represent a guarantee.

The survey discussed the perception and impact of the 18 amnesty decrees issued by the Syrian regime since the start of the popular uprising in March 2011. Examining the timing and scope of those decrees reveals the following patterns:

These patterns can be easily observed in the last two amnesty decrees issued by the regime (mentioned in the first bullet above). Decree 6 was issued on the pretext of combating the COVID19- pandemic by emptying prisons of detainees covered by the decree, which was limited to a very specific type of crime (Drug smuggling crimes – kidnapping – trading in non-Syrian currency – bribery – escaping from military service). According to the Syrian Network for Human Rights, it was a “hoax” that resulted in the release of a very limited number of detainees: they documented only 96 out of 130,000 detainees, those arrested for political crimes. Their report also noted that the regime released detainees imprisoned for either criminal offences or avoiding military conscription. Those accused of terrorism or “weakening the national sentiment”—the regime’s main charges against political dissidents, activists or members of opposition groups—were excluded.

Decree 13 was issued just before the May 2021 presidential elections, using the same approach and implementation as used for previous decrees. There are no official numbers indicating how many people benefited from it. It is clear that amnesty decrees are political tools used by the regime (sometimes successfully) to relieve international pressure and mislead both Syrians and international actors.

These patterns are clearly reflected in our survey results. The vast majority of respondents (64 per cent) confirmed that amnesty decrees are not useful and were not made on good faith but are a means of external propaganda (Figure 22). Regime officials and cronies exploit them for financial gain by extorting affected citizens and their relatives. For example, officials demand bribes in exchange for including a family member’s name in the amnesty regulations—taking advantage of the absence of executive regulations, and the power the security services enjoy within the judicial system.

Figure 22. Participants' opinions about the reality and usefulness of amnesty decrees

Approximately one-fifth (21 per cent) of respondents indicated that these decrees were issued in good faith and held benefits to citizens and contributed to improving the general conditions.

While 15 per cent of respondents said these decisions were made in good faith and for a precise purpose, they held the people in charge of implementing those decrees responsible for manipulating and altering their scope and substance.

“The heads of the security branches make the amnesty law a source of theft. The name of the person who pays more is written on the amnesty lists even though he is detained by mistake or often for no reason.”

Figure 23.. The effect of the amnesty law on the participants and their relatives:

Note: figure shows participants responses to the question «Were your detained relatives released due to amnesty laws?»

Of participants who were in theory covered by the issued amnesty decrees, 79 per cent did not directly benefit from them, nor were there any releases of people in their communities due to the amnesty laws. The 21 per cent of participants who cited positive effects from the pardon decrees were divided over their effective value. Only 12 per cent believed their benefit was real; the rest said that the people who “benefited” from the amnesty had either already finished their sentences or had been arrested a short time earlier for no reason.

A further categorization of the detainees who did not benefit from the amnesty laws revealed the following (Figure 24):

Figure 24. Detainees who did not benefit from amnesty laws

The survey results demonstrate that amnesty laws have a very limited impact on detainees’ situations, and are usually selectively executed, depriving even eligible cases from benefiting.

The Syrian regime continues its repressive policy of arbitrary detention and arrest in most areas under its control (Figure 12). This includes arresting individuals who signed personal settlement documents (“reconciliation agreements”) in reconciliation areas and elsewhere. Arrests also target individuals who criticize the regime or express their opinions about its policies or declining living

Note: figure shows participants’ responses to the question “Have any of your relatives been arbitrarily arrested?”

Nearly one-fifth (19 per cent) of the arrests were against people who have previously been covered by some kind of amnesty laws and decrees issued by the regime (Figure 13). Roughly a quarter (26 per cent) of those arrested had signed personal or collective reconciliation agreements, which are supposed to indicate an even stronger promise/guarantee by the regime (Figure 14).

Note: figure shows participants’ responses to the question “Were the arrested persons covered by any kind of amnesty?”

Note: figure shows participants’ responses to the question “Did the arrested person sign a personal reconciliation?”

These results confirm that the regime does not respect its own agreements and decrees, and that it is very difficult for Syrians living in regime-controlled areas (or planning to return) to make an informed decision about their future, demonstrating again the lack of any real guarantees.