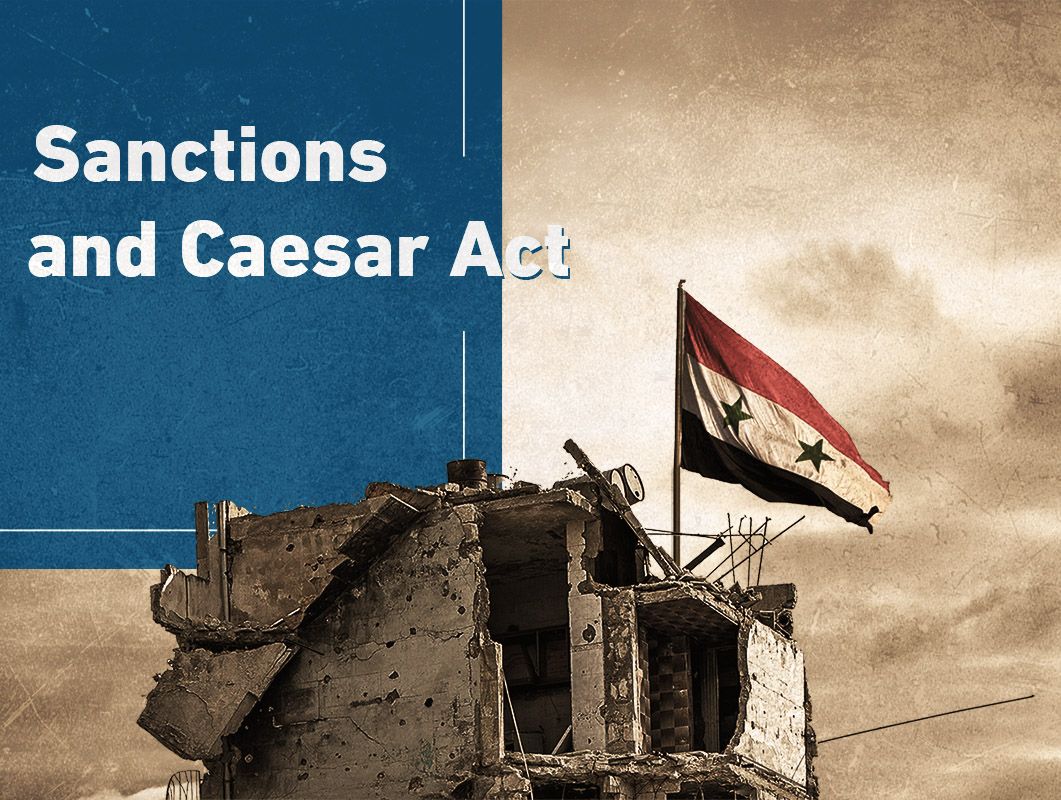 Despite the fact the regime's narratives on the Caesar act have some traction, and people do think Caesar has impacted their lives, a very high number are under no illusions why the sanctions exist and a very surprising number would endure further pain from sanctions if it is used to bring about lasting change.

Since the beginning of the brutal oppression of peaceful demonstrations in Syria in 2011, many countries (mainly the European Union and United States) have imposed sanctions on the regime due to its systematic violations of human rights and the documented war crimes committed against Syrian civilians. These sanctions included oil imports, freezing assets, individual targeting of prominent regime officials, restricting the regime’s import of equipment and technologies used to oppress the Syrian people, and the US Caesar Act, which came into effect in June 2020.

More than three-quarters (86 per cent) of respondents agreed that one of the reasons for imposing sanctions on the Syrian regime is its practices and security policies, while 79 per cent reported they were political in nature and sought to remove the regime from power (Figure 54).

Figure 54. Respondents' perceptions of the motivations for imposing sanctions

Within the those who believe sanctions are political in nature it was difficult to identify a positive or negative connotation: pro-regime participants would see it from a negative and conspiratorial perspective, while pro-opposition participants may interpret it as the international’s community way of pressuring the Syrian regime. Of course, some participants are also driven in their opinions by their personal experiences and interests.

The implementation of the Caesar Act on 17 June 2020 came just after an unprecedented increase in inflation and soaring living costs never before seen in Syria, coupled with a shortage of essential materials and the currency plunging to record low values. The law’s impact on the economy and the living conditions of Syrians in regime-controlled areas is therefore unclear, especially at the time of the survey in Q4 of 2020[1].

Note: figure shows participants’ responses to the question ‘Were you affected by the implementation of the Caesar Act?’

Nearly three-quarters (73 percent) of study participants stated that they believe they were economically affected by this law (Figure 55).

Looking more in detail at how Syrians believe the Caesar Act affected them, it is clear that the perceived impact varied according to their educational levels, employment status, occupation and age group. The greatest perceived impact is on the cost of living and the increase in the prices of essential goods (95 percent); the decline in income came second (33 percent) (Figure 56).

When the participants were asked whether they considered that the Caesar Act a means of pressure on the regime to change its policies and security approach, 44 per cent of respondents said they didn’t think so, while the rest of the answers varied between agreeing with that or not knowing how the Caesar Act may affect the regime’s behaviour (Figure 57).

Note: figure shows participants’ responses to the question “Do you think the Caesar Act pressures the regime to change its actions and security approach?”

Figure 57. Respondents' perceptions of effectiveness of the Caeser Act

These results must be assessed with two major caveats in mind. First, the Syrian people have been subjected to very strong regime-led propaganda over the last five decades that sought to demonize the international community, especially the West, and portray their policies in a conspiratorial manner. This trend has continued throughout the last 10 years, and the Caesar Act was heavily presented to Syrians as a new episode of the West’s war (especially the US) against Syria.

Sanctions Acceptance as a Means of Change

One of the most revealing results of the report is the willingness of people in regime-controlled areas to sustain further hardship due to sanctions or other means of pressure if it will lead to real change in the regime and its policies.

When asked about their willingness to endure the hardship of living conditions and a deteriorating economy for a period of time, provided that it is accompanied by concrete and realistic changes at all levels in the country, 56 per cent of respondents expressed their agreement (Figure 58).

Figure 58. Willingness to endure the hardship from sanctions if they lead to political change

Given that most citizens are unable to secure the minimum income needed to live a decent life, this finding reveals that the desire for change is still very high, despite the hefty price.

[1] The purpose of this section is not to analyse the impact of the Caesar Act on the economy and living conditions, but rather to examine the perceptions of Syrians in regime-controlled areas, and how they believe they were personally affected by the act’s implementation.