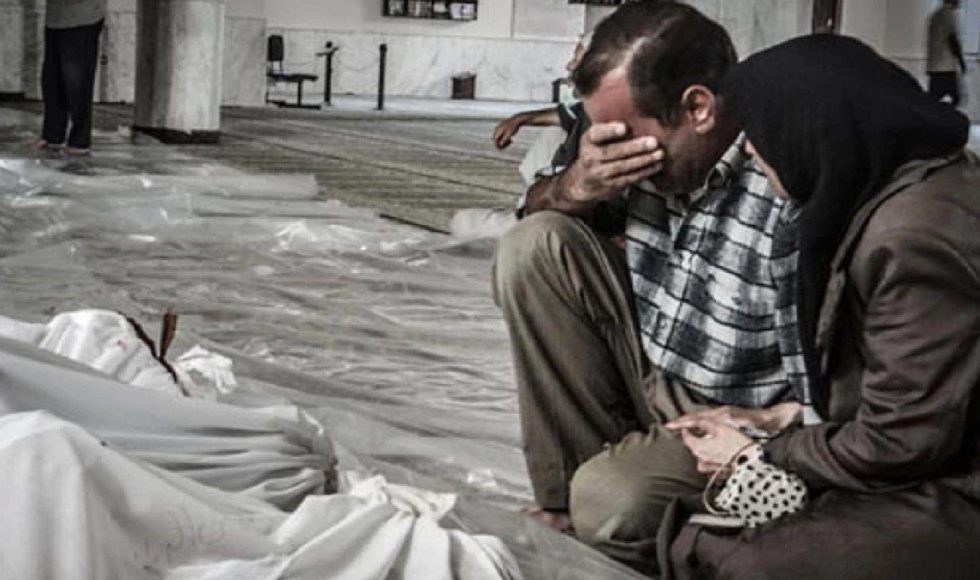 On August 21, 2013, the Syrian regime launched one of its deadliest chemical attacks on highly populated areas in Eastern Ghouta in Damascus countryside. It launched surface-to-surface rockets containing the sarin gas in the early hours of the morning while people were sleeping. The death toll was estimated to range between 1,400[1] and 1,700 people killed, not to mention nearly 6,000 people who suffered from breathing problems.[2] This was the world’s most lethal chemical attack since Saddam Hussein’s chemical attack on Iraqi Kurds in Halabja in 1988.

The UN fact-finding mission concluded that there was a chemical attack against civilians on a large scale in Ghouta in 2013 and the perpetrators had access to the chemical weapons stockpile of the Syrian military. In addition, the UN Human Rights Council’s Independent International Commission of Inquiry also confirmed that sarin gas was used in Ghouta.

This atrocious crime is a clear violation of international humanitarian law and a war crime, despite the fact that at the time of the chemical attack Syria was not a member of the Chemical Weapons Convention. However, the chemical attack on Ghouta is illegal under the 1925 Geneva Gas protocol. In addition, the International Criminal Tribunal for the Former Yugoslavia clearly established that “there undisputedly emerged a general consensus in the international community on the principle that the use of [chemical] weapons is also prohibited in internal armed conflicts.”[3]

The Syrian regime and its allies besieged Eastern Ghouta for nearly five years. Throughout these years, the regime used all methods of oppression and war crimes to force the region to surrender, including starvation and prohibition of medical evacuations, chemical attacks, bombardment and shelling. This has costed the lives of 12,783 civilians who were killed in and around Eastern Ghouta from March 2011 to February 2018, including 1,463 children and 1,127 women.[4] It is estimated that more than 90,000 people from Eastern Ghouta were displaced since March 2018, with more than 50,000 displaced to the north and mostly to Idlib.[5]

Can East Ghoutans return back to their homes in the current situation? No they cannot. And here is why.

After Eastern Ghouta collapsed under the severe bombardment and siege of Syrian regime forces, and their allies, the rebels surrendered and some 90,000 people preferred to evacuate the region rather than live under the rule of the Syrian regime.

This indicates the level to which Syrians lack any trust in the regime. When asked about whether they would return to areas under the control of the Syria regime, 81% of displaced Syrians surveyed in the recent “We Are Syria” report by the Syrian Association for Citizens’ Dignity (SACD), stated that a key condition for their return is the departure of the existing regime (including the figures involved in the operation and abuses of the security apparatus, and the corruption networks that developed under the regime).[6]

This is explained by the fact that the Syrian regime failed to uphold provisions of the agreements that guaranteed the suspension of military conscription, such as the “reconciliation agreement” for Eastern Ghouta. On the contrary, the Syrian regime continued its oppressing practices and failed to instill a sense of security in the areas it regained control of. When asked about the most important conditions for return, 58% of displaced Syrians stated that the abolishment of the compulsory recruitment in all its forms was a main condition for return. In addition, some 80% of them wanted the full and unconditional release of all detainees who were detained for dissent or for being accused of anti-regime activities or sentiment, and called for the revealing of the fate of forcibly disappeared persons and their release or handing over the bodies of those who died in prison to their families. Most importantly, 83% of displaced Syrians who wish to return opted for the complete dismantling of the current security services and reforming them in accordance with laws that would “guarantee that their performance would be focused of an internal security function ensuring the security of citizens and protecting the people in accordance with the laws; without any privileges, violations or encroachment on the rest of the government agencies and the government’s role in the structure of society”.[7]

It is easy to understand why. Since the outbreak of the Syrian conflict, the Syrian regime practiced all forms of violations and oppression towards the Syrian people, thus forcing more than half of the population into internal and external displacement. The fact that the Syrian regime has not shown any intentions of reform, or even begin to curb the criminal practices of its forces, indicates that there is no safe environment for a dignified and voluntary return of Syrians to their homes in Syria.

The chemical attacks on Eastern Ghouta from seven years ago were just a manifestation of the extent to which the Syrian regime is prepared to go in using all means available to gain control of territory – regardless of the human costs. This is the main reason why the displaced Syrians cannot return back to Syria unless the security apparatus that ordered and executed such crimes is not held accountable and dismantled. Some 83% of displaced Syrians surveyed in the SACD report indicated that dismantling and reformulating the security apparatus in Syria is a main pre-condition for any return to their homes. This is directly related to the lack of sense of security and safety that most Syrians feel in the presence of the Syrian regime.

Furthermore, the regime was the main driver of displacement over the years and in various different forms. This is important to note especially because displacement continued even after the regime took over the control of most of the country and the so called “reconciliation agreements” – like that in Eastern Ghouta – failed to halt the repression, arrests and harassment, but in fact resulted in renewed cycles of violence.

The majority (56%) of interviewees in the SACD report were displaced from areas under the control of the Syrian regime or fled while those areas were being conquered by the regime’s forces during the conflict. This number includes people who were displaced from their homes in areas dominated by the regime’s military and security apparatus as well as those who were forced to leave their homes after the so-called forced displacement agreements were concluded between the opposition factions and the Syrian regime forces in the governorates of Aleppo in December 2016, Damascus in May 2017, Damascus countryside in many waves from April 2017 till March 2018, Homs in many waves from 2014 till 2018 and Dara’a in 2018.

Moreover, Syrians distrust the Syrian regime and all its institutions, they question its credibility, and doubt its sincerity. With its continuous attacks on civilians, the Syrian regime was the driver behind the displacement of nearly 81% of displaced Syrians.[8] Given the fact that attaining justice and accountability for the committed crimes is not on the horizon, it is impossible for Syrians to even consider returning back to their homes in Syria as long as those very perpetrators of such horrendous attacks are still in control of the country.

More importantly, even the people who were forced to return from displacement to regime-held areas are fleeing again, using smugglers networks to try to reach safety in other neighboring countries and Europe. Our previous research clearly shows this. According to SACD’s previous report “Between Hammer and Anvil”, 68% of the returnees to Syria advise other displaced Syrians not to return back. The report documented that even returnees who were not affiliated with any groups that opposed the Syrian regime were still subjected to arrests, security abuses, and financial extortion.[9]

The Syrian Network for Human Rights (SNHR) documented at least 25 arbitrary arrests in Damascus and its countryside, including Eastern Ghouta, in the month of May, while in June alone the number reached 112 detainees. The reported numbers are likely lower than the actual rates, as not all cases reached the documentation organizations. More than 40 raids were conducted by the regime forces on residential homes in the neighborhoods of “Al-Hijaria” and “Abd al-Raouf” in just one city – Douma, in Damascus countryside – during which they arrested approximately 30 young men who failed to join the ranks of the regime’s army. Similar raids occurred elsewhere, including Eastern Ghouta.

According to the SNHR, the regime continues to pursue those who settled their security situation in areas that have signed the so called “reconciliation agreements” with the regime, including those in Damascus suburbs.[10] SNHR and other human rights organizations have documented 684 cases of arbitrary arrests in Damascus and its surroundings since the beginning of this year.[11]

All this illustrates clearly that, seven years since the deadliest chemical attack on civilians in Syria, the people displaced from Eastern Ghouta are still far from attaining justice for the horrendous crimes they suffered and a prospect for a safe, voluntary and dignified return to their homes. This anniversary serves as a reminder of the struggle that lies ahead to attain minimal conditions for such return and the responsibility of the international community to uphold its own laws and rules if a sustainable peace in Syria is to be reached.