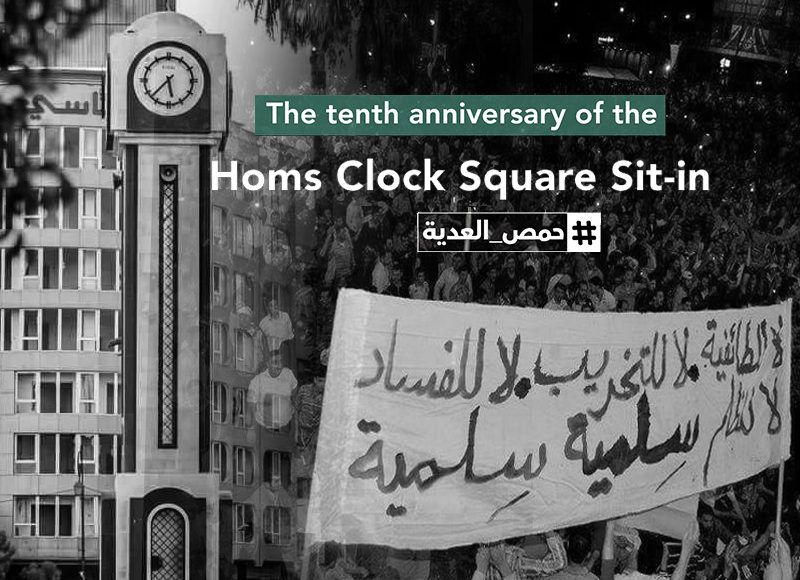 On the 18th of April, the Syrian Association for Citizen Dignity launches a public campaign to commemorate the first peaceful sit-in since the outbreak of popular protests more than ten years ago: the New Clock Square sit-in in Homs. Tens of thousands of demonstrators gathered in the main square of Homs and declared a peaceful sit-in, demanding Bashar Assad to resign after the funerals of a number of protesters were shot dead in Homs the previous day.

On the 17th of April 2011, demonstrations took place in several neighborhoods of the city, coinciding with the anniversary of Syrian independence from France, where the security services confronted those demonstrations with live bullets, resulting in the death of a number of demonstrators.

On the next day, the martyrs were buried in a solemn funeral from the Great Mosque of al-Nuri, which turned into a mass demonstration where tens of thousands of people participated. It was accompanied by a call for a commercial strike, after which the funeral demonstration turned into the famous sit-in.

The sit-in in the New Clock Square in Homs was an important turning point in Syria, as it is where the slogan of bringing down the regime was raised for the first time. It also encouraged Syrians, all over Syria and from all communities, to speak up and demand their rights and freedoms. It reflected the extent of cohesion among Syrians, from all communities, in a unique and advanced civilized scene, after many years of absence of any space to express their rights and demands. At the same time, it was the beginning of an era of extreme violence, persecution and forced disappearance, accompanied by a policy of collective punishment of the people of the city through the siege and bombing of civilian neighborhoods by the Syrian regime, which continued for years, causing the displacement of a large number of residents in an attempt to replace them with populations more loyal to the regime.

On the occasion of the Homs New Clock Square sit-in, the Syrian Association for Citizen’s Dignity affirms that:

The commemoration of the Homs New Clock sit-in, the horrific massacre that followed it, and other painful events that the Syrian people have lived, confirm that our people will continue to pursue their goal of achieving a free and dignified life free of tyranny, which is the life that this great nation deserves.