Rage at Russia comes late, as Syrians saw it coming for years 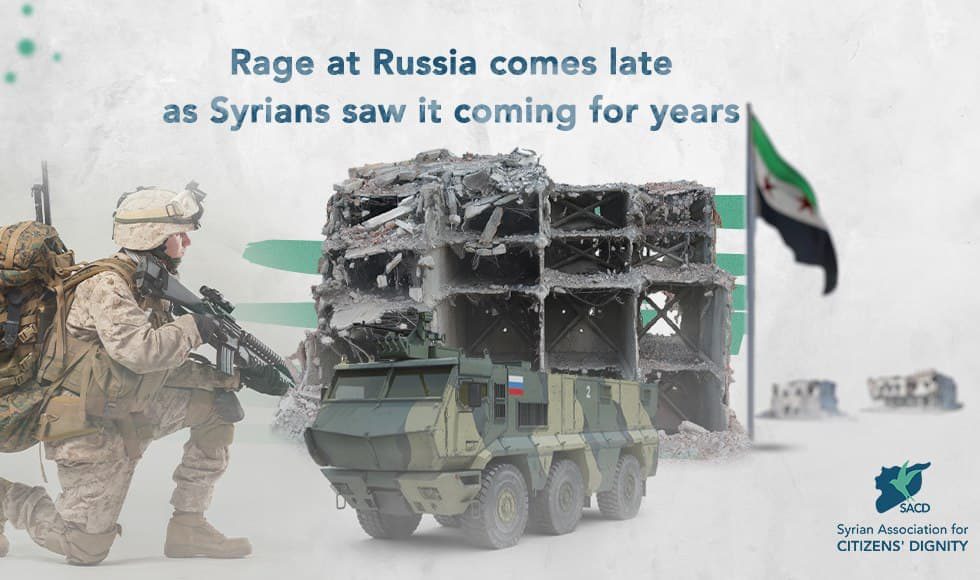 Rage at Russia comes late, as Syrians saw it coming for years

As the world obsessively looks on in horror while the largest conflict on European soil since World War II unfolds, Syrians mostly feel tired.

Many wonder what it would have taken to get the same attention for the killings and human rights abuses that served as a training ground for the aggressors and trial runs for their weapons.

Now borders are open, the West is standing with near unanimity against the war, weapons are being sent.

The European Union on February 24, shortly after the Russian invasion of Ukraine started, said that it would “hold the Kremlin accountable” for the “unjustified” attack on Ukraine.

“In these dark hours, our thoughts are with Ukraine and the innocent women, men and children as they face this unprovoked attack and fear for their lives,” European Commission President Ursula von der Leyen said.

The Russian media warfare is also on full force, only instead of intellectuals arguing that RT and Sputnik may have merit, they have been banned as being part of Russian President Vladimir Putin’s “media machine”.

Syrians knew this long ago, though. They remember the lies and disinformation campaigns against the rescuers of the Syrian Civil Defense, more frequently referred to as the White Helmets.

The uprising in Syria was against a dictatorship: internal, thus, and not an “external” aggressor. Ukraine has been separate from Russia since the Soviet Union fell apart about 30 years ago – though Russia still sees it as part of its territory.

Ukraine declared sovereignty on July 16, 1990 and then independence the next year, move that was confirmed in a plebiscite a few months later.

Russia tested over 300 weapons in Syria. There are also private Russian paramilitary forces.

The country under Putin was responsible for bombing schools, hospitals, and residential areas in opposition-held areas of Syria that met with outcry but no real action.

Human Rights Watch reported in 2020 that: “Dozens of unlawful air and ground strikes on hospitals, schools, and markets from April 2019 to March 2020 killed hundreds of civilians. The attacks seriously impaired the rights to health, education, food, water, and shelter, triggering mass displacement.”

It added: “the Syrian-Russian alliance repeatedly violated the laws of war against the 3 million civilians there, many displaced by fighting elsewhere in the country. It names 10 senior Syrian and Russian civilian and military officials who may be implicated in war crimes as a matter of command responsibility: they knew or should have known about the abuses and took no effective steps to stop them or punish those responsible.”

Now, Russia is taking over more nuclear facilities on that European soil. The West thought it could simply look away as people were killed and tortured in other homes.

The West as regards Syria also “knew or should have known about the abuses and took no effective steps to stop them or punish those responsible”, Syrians feel.

It had forgotten that impunity leads to more of the same: only this time, it’s not Arabs killing Arabs.

It’s white people killing white people in a country that only a few weeks ago was seen as a great tourist destination with nightclubs, young leaders, natural resources and, crucially, hope.

Now Syrians look on and want others to be given the hope they were deprived of over the years. A war conducted through attrition, lies, and terrorizing civilians. But they fear it may be too late.