Al-Suwayda is part of southern Syria, which has not calmed since the beginning of the conflict in 2011 and is currently witnessing a noticeable escalation that may lead to the explosion of the entire area.

Since the beginning of 2022, several areas in the province have witnessed demonstrations against the regime, and the demonstrators carried slogans denouncing the regime’s failed policies which led to a sharp deterioration in living conditions. They also demanded the implementation of UN Resolution 2254, which provides for a political transition in Syria.

In early February 2022, protesters cut off primary and secondary roads, even the road linking Al-Suwayda to the capital Damascus.

The main trigger of the protests was the deteriorating living and economic conditions, the decline in the level of services provided by the regime to the governorate, and the rejection of Russia and Iran’s continuous attempts to expand their influence. Most importantly, it was the pressure from the regime and its allies to impose forced conscription on thousands of the province’s young men, who refused to join the regime’s forces.

The pressure boiled over after the attempt to form a military force of young men who refused compulsory service, led by the son of Brigadier General Issam Zahreddine, who was previously killed in Deir Ezzor.

Violations and events escalate in the absence of any solution:

On Saturday 23 July, several civilians were kidnapped in the city of Al-Shahba in the countryside of Al-Suwayda by militia members affiliated with the military security of the Syrian regime, who call themselves the Fajr Forces militia, who are led by the so-called Raji Falhout.

The latest kidnapping incident ignited the popular uprising against the Syrian regime in the entire governorate. The most significant clashes of its kind and violent confrontations with light and medium weapons occurred between local factions and the Fajr Forces militia and cut off the international road to Al-Suwayda-Damascus from the town of Attil in the north to the city of Shahba. The locals arrested officers of the regime forces and overwhelmed the headquarters of the Fajr militia, besieging them and arresting all its personnel present there.

Suwayda 24 network indicated that the local factions managed to free the kidnapped people after storming the headquarters of Raji Falhout, and arrested Raji Falhout after besieging him and several of his militia members in the town of Attil. The details of his arrest remain uncertain so far.

The headquarters of Raji Falhout fell into the hands of the local factions and the revolting groups. Then, on Tuesday 26 July, the factions burned the main headquarters of the Falhout militia in the town of Salim, which was a center of kidnapping, killing and torture.

The network had confirmed the killing of four people from the city of Al-Shahba as a result of mortar shelling from the Fajr Forces militia, and a young girl from Salim town injured due to violent clashes. The death toll from clashes rose to 17, and dozens of people were wounded, according to quoted activists and local medi.

The tools used by the Syrian regime against the Syrian people are similar in terms of practices, crimes, and harassment of civilians in all areas under its control. Although some events differ from one area to another, they are all part of the same repressive pattern that renders all of Syria unsafe and dangerous.

The regime’s attempts to implement its agenda through armed groups and gangs operating under its directives became evident, especially with the growing strength of local factions in 2015 when recruitment operations became widespread and the Military Security Branch was attracting local armed groups, despite their involvement in killings, kidnappings, and violations against civilians. It works on recruiting them, regularizing their status, and granting their members weapons and temporary security cards.

Activists have described the current events in Al-Suwayda as reminiscent of the uprising in 2011, reminding of the scenes of Idlib, Homs, Hama, Aleppo, and Damascus at the beginning of the popular revolution.

As campaigns of arrests and enforced disappearances continue, kidnappings are on the rise in Al-Suwayda, and assassination attempts are rising day by day in Daraa. This is evidence that the Syrian regime’s guarantees and empty promises mean nothing in practice, Russia can never be a guarantor of peace in Syria, and there is no safe environment in Syria in which the displaced Syrians can return.

The primary and only beneficiary of the state of lawlessness in Al-Suwayda is the regime that controls the province. All indications are that its policies do not aim to achieve any peace or stability in Syria nor to establish a safe environment for the return of Syrians to their homes, but rather to secure complete control of the territory with negligible numbers of the original population.

The involvement of the regime militias in drug manufacturing and smuggling:

The involvement of the Fajr Forces militias in the drug manufacturing and smuggling route towards Jordan through southern Syria has been proven by the discovery of a drug factory and the seizure of machines and presses to manufacture hallucinogenic pills and narcotics pills in its headquarters.

The Men of Dignity movement[1] announced that it found a drug factory and seized machines and presses for the production of hallucinogenic pills and narcotic pills at the headquarters of Raji Falhout. The photos showed small bags of drugs, similar to the shape of the packaging of drugs seized by the Jordanian army during the past years. 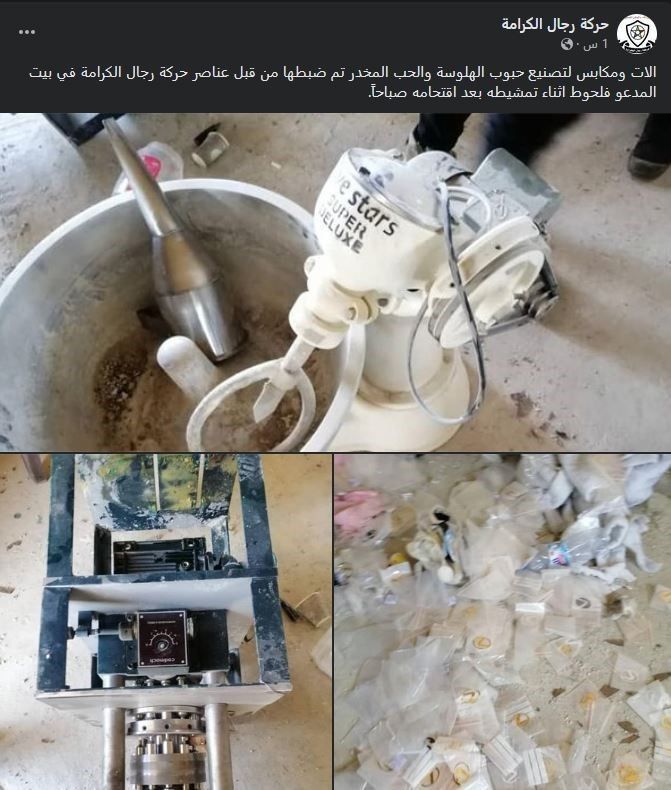 While Syria has turned into a drug-exporting country, Daraa and Al-Suwayda became Hezbollah’s center for drug production and smuggling, taking advantage of the poverty in the region.

The Director of the Border Security Directorate in the Jordanian Armed Forces, Brigadier General Ahmed Hashem Khalifat, accused what he called “undisciplined forces” in the Syrian regime’s army and security services of supporting drug smugglers and carrying out smuggling, pointing out that “Jordan’s borders with Syria have become the most dangerous borders of the Kingdom.” Jordanian forces on May 22 announced they had broken up a major smuggling operation on the kingdom’s eastern border with Syria, seizing 637,000 Captagon pills, 181 palm-sized sheets of hashish and 39,600 Tramadol pills.

American congressmen French Hill and Brandan Boyle, and Senator Roger Marshall sent a letter to the State Department, in which they wrote “In addition to its gross human rights violations and regularly committing war crimes against his own people, the Assad regime in Syria has now become a narco-state. The production and trade of the drug, Captagon, is not only a critical financial lifeline to Assad but it cripples local populations, serves to undermine families and local communities, and finances Iran-backed groups in the region”.

Russia and Iran are taking advantage of the difficult living reality:

With the worsening living conditions, the high unemployment rate, and the presence of thousands of young people who previously refused compulsory service in the ranks of the regime forces, Russia and Iran took advantage. They worked to put more pressure on the people to recruit youth into the ranks of military formations or armed militias.

The Suwayda 24 network indicated that the “Syrian National Youth Party,” licensed by the government of the Syrian regime, was involved in recruiting young men from Al-Suwayda and different governorates and that the secretary of the party branch in the governorate, Shibli Al-Shaer, is responsible for the file of youth recruitment in Al-Suwayda, with the support of From the Russian company “Wagner.”

This shows unequivocally how the regime and its allies are not only working to take revenge from the people but also indicates that Russia and Iran are feeding the unrest and causing security chaos in the region.

[1] The Men of Dignity Movement is an armed social movement active in Al-Suwayda Governorate and was established in 2013.