When I was in the old Homs city in 2012, the rebels arrested several elements of Assad’s ‘civil defense’ force, also called ‘Popular Committees.’ It struck me at the time that those people were Syrian nationals who all received training in camps near Tehran, the Iranian capital. At the same time, Iranian officers were providing support to Assad’s National Defense Forces through field training and supervision of military actions.

Although Iran’s military engagement in Syria was initially focused on providing training, logistical, and technical support to Assad’s regime, the relationship quickly moved towards deeper integration of military systems and creation of separate military structures directly linked to Iran. 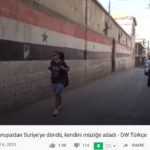