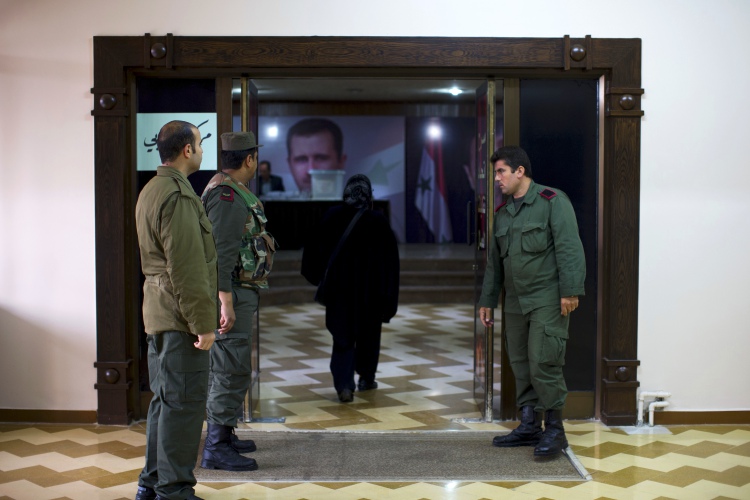 In any country with minimal respect citizenship and human rights of its citizens, elections are the primary medium of expressing the will and the voice of the people. For decades, we Syrians have not had circumstances where elections would have any meaning beyond a false legitimization of the Assad regime, first Hafez and then his successor Bashar. It is utterly pointless to discuss any elections held by the Syrian regime as anything but a macabre spectacle where masses are forced to participate in a farce orchestrated by a dictator and the system that keeps him in power.

However, elections are a vehicle that some in the international community see as an element of stabilization in Syria, which impacts policy discussions in Geneva and behind the scenes. While the necessity of elections in any post-regime Syria is beyond dispute, talking about elections in the current circumstances for the vast majority of displaced Syrians can be compared to being offered science fiction to replace the reality in which they live.

Illustrating how immaterial is to be discussing elections without addressing the safe environment and achieving a comprehensive political solution with robust international guarantees was the main purpose of a briefing published recently by the Syrian Association for Citizens’ Dignity. The paper lists at least ten reasons why this is so.

The most important obstacle is in the fact that security conditions for free and fair elections simply don’t exist.

The majority of Syrians living in regime-held areas do not feel safe due to the regime’s security policies and the repressive grip of its security apparatus. People living in these areas are subject to arbitrary arrests, forced disappearances, harassment, extortion, beatings and torture of people even suspected of having anti-regime sentiments; attacks and military sieges against areas seen as anti-regime continue. People are disappeared for posting a critical Facebook status or for trying to reclaim their property. How can anyone in their right mind imagine an anti-regime candidate running for office, campaigning and having access to media in these circumstances?

The rights and freedoms of Syrian detainees have been violated on a daily basis for the last 10 years. At least 130,000 Syrians are currently being detained for opposing the regime, and many more have been forcibly disappeared. 82 per cent of the 1,100 displaced Syrians surveyed by SACD asserted that the unconditional release of detainees and revealing the fate of forcibly disappeared individuals were fundamental conditions for their safe and dignified return. If elections are conducted without addressing the most significant breaches of rights and without addressing the situation of the remaining detainees, millions of Syrians will not consider any future ballots to be legitimate.

The security situation is made more complex by the fact that Syria is currently divided into three main areas of control: regime-held areas, opposition-controlled areas and areas controlled by the Syrian Democratic Forces. Each has different security and governance situations, but none has even the minimal security conditions for free and fair elections.

Other than security, there myriad other obstacles for displaced Syrians to run and vote, including intimidation, harassment and targeting by the regime through embassies, but also legal and logistical. The scale of displacement presents an unprecedented challenge for any registration or remote voting mechanism. And this is if we don’t count explicit constitutional provisions which bar displaced Syrians from running and give complete control to the Syrian regime when it comes to approval of possible candidates.

Addressing the root causes of such obstacles can only be achieved by implementing a safe environment as part of a comprehensive and sustainable political solution with international guarantees and monitoring mechanisms, in accordance with the aspirations of the Syrian people, and taking into account their concerns and historical view of elections.

The Syrian regime cannot be trusted to allow free and fair elections. In order to be accepted as legitimate by the Syrian people, elections must be internationally implemented and supervised, from registration to implementation to counting.

Surveys and opinion polls amongst displaced Syrians and direct outreach to displaced communities confirm Syrians’ negative view of any presidential elections that allow the participation of Bashar Assad or any regime figure who took part in committing war crimes or crimes against humanity in Syria. The participation of such figures will jeopardize the credibility of such elections and the parties supporting it.

Syrians will view any attempt by the international community—through the UN or other international actors—to push for elections before a safe environment has been achieved as a move to legitimize the current head of the regime.

International efforts to hold credible and legitimate elections in Syria should be focused on first achieving a political solution in accordance with the Geneva Communique and UNSC Resolution 2254 and in line with the aspirations of the Syrian people. Such a solution should include a section on free and fair elections, which details the changes that must take place before credible elections can be held.

For example, the political agreement must incorporate international human rights instruments that stipulate the fundamental criteria for assessing whether elections are free, fair and democratic, including the ICCPR and the European Convention for the Protection of Human Rights.

The political agreement must ensure the right to vote in secret and without fear or intimidation; freedom of expression and the media; freedom of association; freedom of movement; and a politically neutral environment in the lead-up to election day. This last requirement will bind the signatories to create a climate of security, comply with human rights provisions and create a safe environment.

After a safe environment is secured, an independent electoral body, under the strict supervision of the international community, must be established to implement and oversee the entire election process. The electoral body should certify that the conditions exist for elections to be held, especially regarding security and the right of all Syrians to vote (and be voted for) regardless of their political, religious or other affiliation.

The election body must promulgate comprehensive and detailed requirements for the conduct of the electoral proceedings, outline the rules for campaigning, register voters including displaced Syrians, design codes of conduct for the media and governments, and oversee voting day events, counting procedures, and the announcement and certification of the final results.

Displaced Syrians must be allowed to run in free and fair elections and to ensure that a number of measures are enacted, including: universal and equal suffrage for all adult citizens; secret balloting and honest and public counting and reporting procedures; respect for the right of citizens to seek political or public office; respect for the right to freely establish political parties or organizations, as well as legal guarantees to compete in elections on an equal basis; a fair and free campaign atmosphere in which administrative actions, violence and intimidation do not prevent parties or candidates from freely presenting their views and qualifications, deter citizens from learning about and discussing them, or stop voters from casting their ballot free of fear of retribution; unimpeded access to the media on a non-discriminatory basis for all political participants; and free access for international monitors of the electoral process.

And this is a bare minimum for the discussion on elections in Syria to have any meaning. Without this minimum, such discussions will remain in the realm of science fiction.

Marwan Nazhan is an SACD trustee and activist from Al Mayadin, Deir Ezzor. He was displaced in July 2014 and currently lives in Urfa, Turkey. He works as a Dentist in the hospitals of liberated areas in northern Syria.