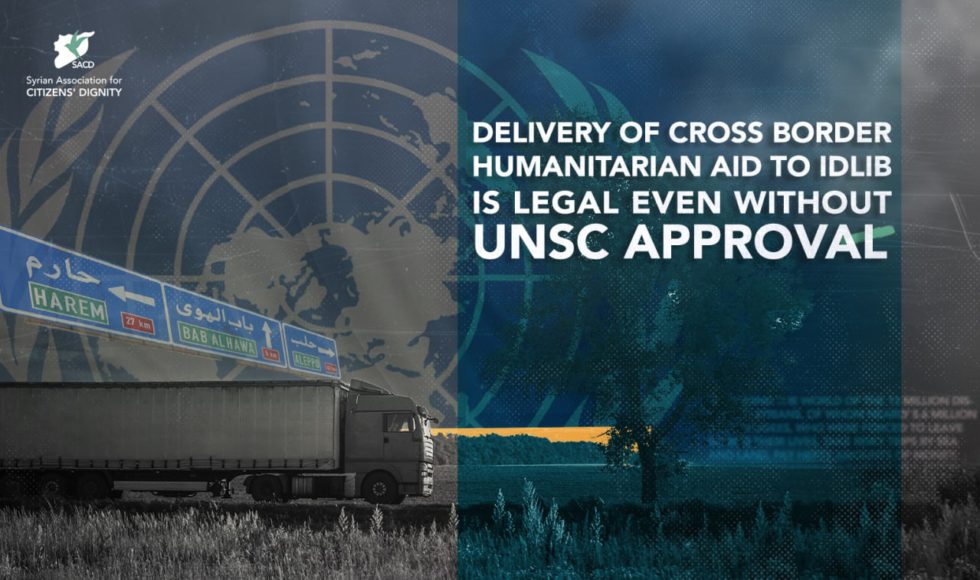 Idlib, 05 July 2022 – The Syrian Association for Citizens’ Dignity and the undersigned Syrian civil society organizations come together to warn against the calamitous consequences of capitulating to Russia’s blackmail at the UNSC should it lead to the complete cessation of cross-border aid, leaving more than three million Syrians in dire humanitarian need. The legal basis for the UN to continue delivering cross border humanitarian aid exists even if the UN SC withholds its approval. We call on the United Nations and the key governments to ensure that millions of civilians, already categorized by the UN as in ‘catastrophic need’ of humanitarian assistance, are not sacrificed on the false basis that the UN’s hands are tied by a Russian veto.

Today, more than ever, with Russia’s methods laid bare to the world to see not only in Syria but also Ukraine, there is no shred of a doubt that Russia cannot be regarded as anything but an aggressor against the people of Syria. As such, it is inhumane and unacceptable to place the fate of millions of Syrians crammed in Idlib in the hands of an aggressor who wields the veto power in the UN Security Council. Not only because Russia is sure to abuse its power in order to pursue its goals in Syria, but also because the legal basis for delivery of aid to Idlib without the UNSC approval is strong and clear.

We understand the complexities facing the United Nations in Syria, where the Syrian regime and its allies continue to force the UN to act in accordance with the regime’s demands if it wants to continue operating in areas under the regime’s control. We are also aware of the futility of appeals to Russia’s humanitarian instincts using warnings of the humanitarian catastrophe that is to befall the millions of people crammed in Idlib, should the cross-border aid be stopped. We all have witnessed Russia’s humanitarian instincts in the years of indiscriminate bombardment of Syrian civilians and other crimes against humanity committed by its forces in Syria, which has been taking place for years in Idlib. We are now aware of Russia using the threat of another massive displacement in its conflict with the European Union over Ukraine. However, the legal basis clearly exists for civilians of Idlib not to be made victims of Russia’s abuse of the UNSC veto powers.

As the regime and its Russian and Iranian allies continue to attack civilians in Idlib on daily basis, it is utterly unreasonable to expect the Syrian regime to be a conduit for the delivery of humanitarian aid to Idlib. It is absurd that the international community would consider replacing cross-border with cross-line aid, as the regime’s record proves that it never hesitated to use and manipulate humanitarian aid and starve populations to force them to surrender, as was seen in Eastern Ghouta and Homs.  The outcome of such a scenario will inevitably lead to new waves of displacement towards the Turkish border of millions of people already living in extremely harsh conditions. The repercussions of such a humanitarian catastrophe will be felt not only in Idlib but also in neighboring countries and Europe.

We thank all the governments who supported the UN General Assembly resolution of 30 October 2020 on the situation in the Syrian Arab Republic which, inter alia, states that “the humanitarian cross-border mechanism remains an essential and life-saving channel to address the humanitarian needs of a significant portion of the population” of Syria and demanding that “the Syrian regime and all other parties to the conflict not hinder full, timely, immediate, unrestricted and safe humanitarian access, and calls for the continuation of cross-border humanitarian support beyond July 2021.”

We call on you to be principled enough to use clear and existing alternative legal routes to continue the UN’s assistance in northern Syria.

The UN ought to be principled to use clear and existing legal alternative methods to continue much needed humanitarian aid to northern Syria.