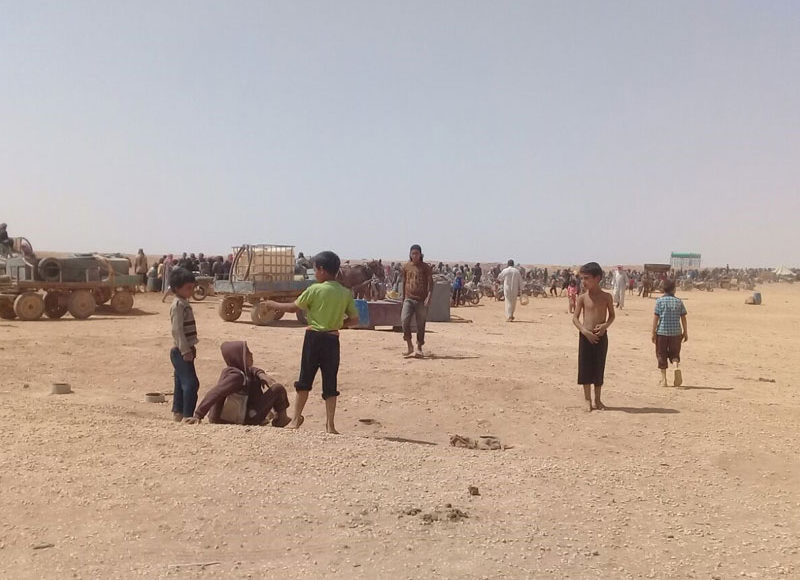 In April, the Syrian Association for Citizen’s Dignity published a status report on Rukban, which detailed the tactics employed by the Assad regime and Russia to forcibly return the inhabitants of the camp to Assad-held areas. We documented the plight of people in the camp who are forced to live under a de-fact siege, without basic supplies and amenities; as well as the fate of those who were forced to return and were taken to detention centers where they faced harassment, beatings and in some cases disappearances.

We continue to follow the situation, especially as the siege by Assad and Russian forces intensified, forcing thousands more into choosing detention centers in Assad-held territory over the dire conditions of Rukban. Mouhamad Abuammar personifies thousands still trapped in Rukban, facing this impossible dilemma. In May he told SACD: “I can’t stay here in camp with my children and wife without food and water in this weather. I am seriously considering going to regime areas. Many families I know did that.” When we checked this week, Abuammar and his family were still in Rukban. He repeated that he is thinking about going due to harsh living conditions, but he is scared as many of his friends and relatives who returned are still detained in “refugee shelters” and aren’t allowed to go out. He is deeply worried what would happen to himself and his family if they were to be detained in these “shelters” like the others he knows.