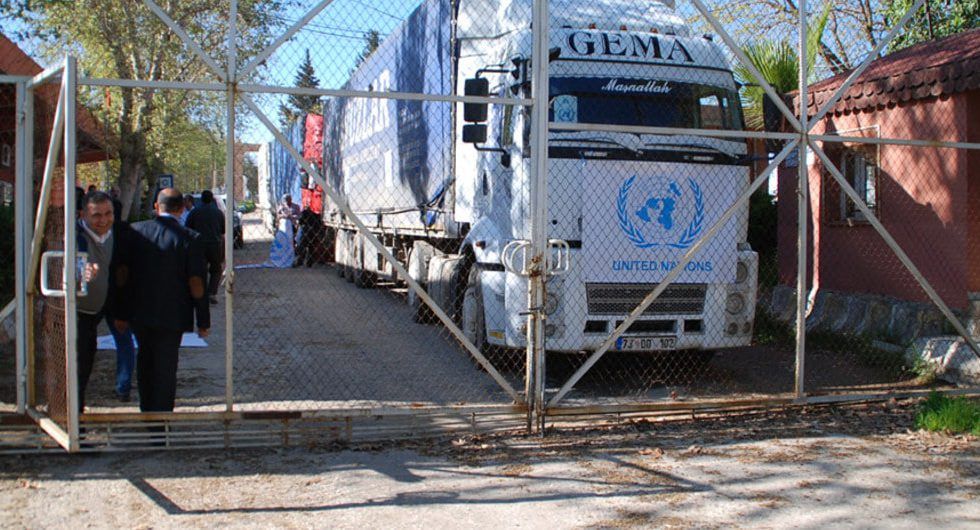 As the vote on the extension of the Resolution 2165 in the United Nations Security Council (UNSC) approaches, which Russia has threatened to veto and leave more than three million Syrians, (mostly displaced from elsewhere in Syria and mostly children) without the lifeline of cross border humanitarian aid, the conversation surrounding this humanitarian crisis has been entirely focused on appealing to Russia’s humanitarian instincts, expecting that the illustrations of the devastating impact on Syrian lives of its action in the UNSC will somehow make Vladimir Putin change his mind and allow for aid to continue flowing into Idlib.

Extension of this resolution has become a deadly weapon in the hands of Russia, used to bargain for concessions from the West and/or push for normalisation of the Syrian regime. The record shows that no amount of humanitarian advocacy directed at Russia will produce any positive results for the Syrians dependant on the aid crossing into Idlib. We are aware of the futility of appeals to Russia’s humanitarian instincts using warnings of the humanitarian catastrophe that is to befall the millions of people crammed in Northwest Syria, should the cross-border aid be stopped. We all have witnessed Russia’s humanitarian instincts in the years of indiscriminate bombardment of Syrian civilians and other crimes against humanity committed by its forces in Syria, including as recently as this week in Northwest Syria. Syrians know that such appeals will not change and that the blackmail will remain in place unless Russia is able to cement its military gains in Syria through concessions from the West on reconstruction money and normalisation of Assad’s regime. Insisting on this borders on the Einstein’s definition of lunacy which talks about doing the same thing over and over again, while expecting the outcome to change.

The time has come for the conversation on humanitarian aid to north-west Syria to change, as there is every moral, political and, most importantly, legal argument for it. Humanitarian aid to Idlib can and must continue to be delivered even if the UNSC approval is withheld.

We in the Syrian Association for Citizens’ Dignity, together with the leading scholars of international law, believe there is more than sufficient legal basis for the UN’s Emergency Relief Coordinator Martin Griffiths to do so.

We understand the complexities facing the United Nations in Syria, where the Syrian regime and its allies continue to force the UN to act in accordance with the regime’s demands if it wants to continue operating in areas under the regime’s control. We understand the political minefield that the UN has to navigate to maintain assistance to the vulnerable Syrians. However, we do not accept the assumption that humanitarian aid to Northwest Syria is illegal without the UNSC approval, nor the assertion that the UN has no other legal basis for continuation of aid delivery outside the UNSC authorisation.

We recall that in 1986, in the case of Nicaragua vs the United States of America, the International Court of Justice has clearly held that “There can be no doubt that the provision of strictly humanitarian aid to persons or forces in another country, … cannot be regarded as unlawful intervention, or as in any other way contrary to international law.”

In addition, it is the consensus of the leading world experts on international law that there is no legal barrier to the UN directly undertaking cross-border humanitarian operations and supporting NGOs to undertake them as well, with three primary conditions for legality of cross border aid that the UN clearly meets.

Clearly, the legal basis for the UN to continue delivering cross border humanitarian aid exists even if the UN SC withholds its approval. The UN Emergency Relief Coordinator must ensure that millions of civilians, already categorized by the UN as in “catastrophic need“ of humanitarian assistance are not sacrificed on the false basis that the UN’s hands are tied by a Russian veto. The ERC must find the strength to be principled enough to use clear and existing alternative legal routes to continue the UN’s assistance in northern Syria.

The UN entities responsible for the continuation of cross-border aid to northern Syria seem to rely heavily on the opinion of the Office for Legal Affairs (OLA) which serves as legal basis on to which they are insisting that the UNSC approval is required. However, this legal opinion is not public to be tested and debated by the international law community.

“It seems incredible to me that there is all this planning on the basis of the legal status quo that the security council authorization is necessary for the provision of humanitarian assistance in non-government controlled Syria and yet that legal opinion maybe does not even exist, and if it does exist, then it is not even shared and no one is able to look at it and interrogate it,” said Rebecca Barber, a researcher and consultant on international law, in an interview with SACD.

“Rebecca Barber, a scholar of international law who published on cross-border aid to Syria”

We are convinced that everybody involved is fully aware of the seismic and catastrophic consequences of succumbing to the Russia’s blackmail which would see the cross-border aid discontinued. The UN has been explicit that the Syrian regime has over the years consistently, systematically and arbitrarily denied consent for a wide range of legitimate humanitarian relief operations and delivery of humanitarian aid to opposition-held areas. The Syrian regime and its Russian and Iranian allies continue to attack civilians in Idlib on daily basis as we write these words and to expect the Syrian regime to be a conduit for humanitarian assistance to Idlib is beyond lunacy. The result of such a scenario would inevitably manifest itself in new waves of displacement towards Turkish border of millions of people already living in extremely dire conditions. The reverberations of such a humanitarian catastrophe would be felt not only in Idlib, but in the neighbouring countries and Europe, nobody serious doubts this.

The solution to the Russian blackmail in the US SC is not in trying to appeal to the humanity of Russia and other members of the UN SC, but to offer a legal path to the key states and the UN to deliver aid without the UN SC approval.

Therefore, we in the Syrian Association for Citizens’ Dignity have addressed the UN Emergency Relief Coordinator and key states involved in discussions on Syria with the following:

– Calling on the ERC to ensure that millions of civilians in north-western Syria, already categorized by the UN as in “catastrophic need” of humanitarian assistance, are not sacrificed on the false basis that the UN’s hands are tied by a Russian veto;

– Demanding from the ERC to continue delivering cross border humanitarian aid if the UN SC withholds its approval, as there is clearly a legal basis for the cross-border delivery of aid without the UNSC authorization;

– Requesting the UN Office of Legal Affairs to make public the legal opinion which serves as the legal basis for the ERC and individual UN agencies’ insistence on the UNSC authorization as a condition for the delivery of cross-border aid;

– Calling upon key states to sponsor a new UNGA Resolution on Syria to emphasize that the international community has an “essential interest” in ensuring that lifesaving humanitarian assistance is provided, and recognizing that in northern Syria this essential interest faces grave and imminent peril;

– Calling upon key states to address the UN Emergency Relief Coordinator and encouraging the UN to use clear and existing legal routes to continue the UN’s assistance in northern Syria even if the UNSC does not extend the Resolution 2165.

Syrians and all the good people of the world are watching.