Syrian Refugees arbitrarily detained and tortured in Lebanon: A conversation with Marie Forestier 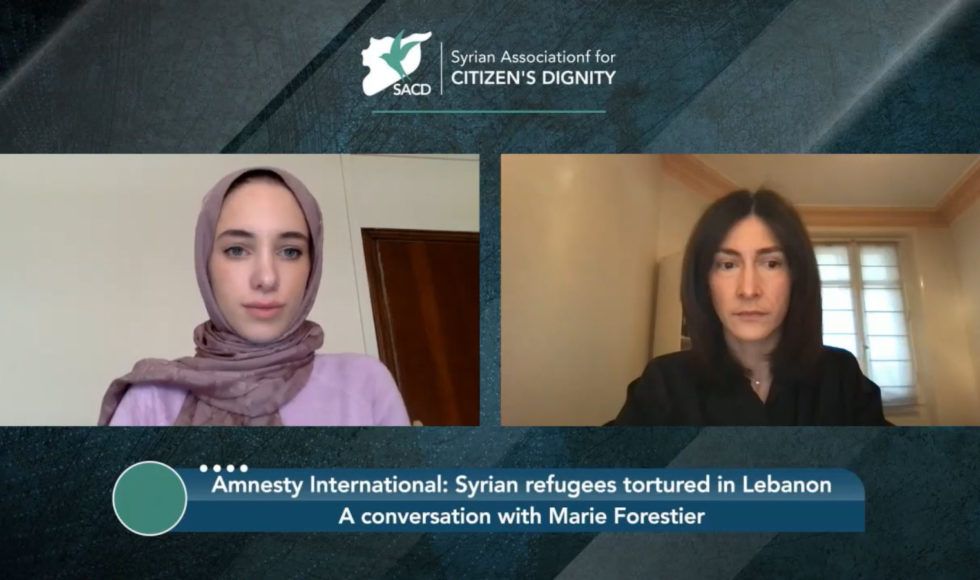 Syrian Refugees arbitrarily detained and tortured in Lebanon: A conversation with Marie Forestier

On May 23rd, Amnesty International published a report which documented cases of Syrian refugees being arbitrarily detained on terrorism-related charges and tortured in Lebanon. This comes as a very important and timely report, especially that the situation of Syrian refugees in Lebanon has been exacerbating after the Beirut blast, which was already deteriorating as a result of the Covid-19 pandemic.

Lebanon is home to more than one million Syrian refugees, many living in informal camp settlements, and many of whom lack legal documentation in the country. And recently, there has been increased discriminatory discourse against Syrians, especially from Lebanese officials, such as Deputy PM Zeina Awkar who called for the return of Syrian detainees to Syria, not to mention the refugee return plan that the Lebanese caretaker Prime Minister, Hassan Diab, has declared that “the Lebanese government plan for the gradual return of the displaced Syrians, adopted on July 14, 2020, should be  allowed to reach its goal with the assistance of the International Community.”

Such statements only serve the Syrian regime, which is the main driver of displacement in Syria, and no safe return can ever occur with it in power. Such attempts at dehumanizing the Syrian refugees, and isolating their return from the political solution, are similar to some desperate attempts like the so-called return conference organized by Russia in Damascus, which aimed at serving the misleading narrative of the regime and called for an immature and unsafe return for refugees.

Furthermore, discriminatory discourse against refugees is worrying since it increases tension between refugees and the host community, which has been on the rise given the harsh economic conditions Lebanon has been enduring, such as the burning of the Al-Minyeh refugee camp in northern Lebanon, frequent military raids on camps and movement restrictions imposed on refugees by certain municipalities. This not only poses threat to the Syrians themselves, who not only lack protection in Lebanon but also live in constant fear of being deported back to Syria.  Also, this threatens internal peace and harmony and increases tension between the Lebanese host community and Syrians

As such, SACD’s head of public relations, Haya Atassi held a conversation with Marie Forestier, researcher and advisor on refugee and migrant issues at Amnesty International on the latter’s report on arbitrary detention and torture of Syrian refugees in Lebanon on counter-terror charges. The discussion revolved around the Lebanese state’s responsibility to protect Syrian refugees from being arbitrarily detained, tortured, and falsely accused of terrorism-related charges. The discussion also held that the international community has a moral and humanitarian responsibility to protect Syrian refugees in Lebanon, in line with international treaties on torture, refugee protection, and the principle of non-refoulment.

The research that Amnesty conducted has focused on Syrian refugees who live in Lebanon and have been arbitrarily arrested and accused of terrorism-related crimes. It found that hundreds of refugees have been arrested, since 2012, detained and tortured during interrogation. They served sentences in jail in trials that have relied on confessions obtained under torture and with little evidence. According to the report, Amnesty International believes that this pattern reflects a broader pattern that has been affecting thousands of refugees since 2012.

Secondly, Lebanon is a party to various conventions that oblige it to respect rights and freedoms and not to use torture. Therefore, Lebanon must use and implement the legal framework that was agreed upon. For example, in 2017, the Lebanese government issued the Law on Prevention of Torture, so this law exists, but the issue here is to implement it. Since Lebanon is part of the Convention on the Prevention of Torture, and it has established committees responsible for monitoring the status of prisons and inspecting prisons, all powers must be given to these committees so that they can monitor all stages. The first of the arrests were in the Military Intelligence and not only in the large prisons in Lebanon.

First of all, I focused on documenting Syrian detainees accused of terrorism charges, and I did not document detention for other reasons, so I cannot say that torture happened with other cases. What I can say is that with people arrested on charges related to terrorism, it is a systematic act, as in the twenty-six cases that I documented, only one person was not subjected to torture or ill-treatment because it was a very, very special case.

With regards to the fact that there are a series of orders to treat refugees in this way, it is difficult to report that because I do not have the information to acknowledge this, but what I can say is that this matter happened in every center where people were held, not in one center, before those detainees were brought before the judge. The other thing is that this happened repeatedly to all the people I interviewed who were arrested from 2014 to 2019, that is, during 5 years, to all but one of them, and this indicates that the use of torture is a systematic thing. This documentation was also based on the opinions of Amnesty International, which in turn documented the use of torture on Lebanese citizens, journalists, or citizens who participated in protests. Therefore, this torture and ill-treatment is a method used in the arresting process.

As for the people who were arrested, for sure, as I documented several cases of Syrian men who served their sentences in prison and then were informed of the necessity to leave for Syria, of course, this is illegal and against international law, no person should be deported to a place where he is at risk of being subjected to human abuse, regardless of this being A person has committed a crime, so even a man who is serving his sentence in prison or a prison sentence is unlawful for his deportation after that.

This was the first thing, and as you said, and as we know that the risk is very high of deporting Syrians to Syria. Therefore, this is a major violation of human rights by the State of Lebanon.

Amnesty International believes that the conditions for safe, voluntary, and dignified return in Syria have not yet been achieved. The Syrian government has committed major violations of international humanitarian law in addition to other armed groups in Syria, so the conditions are not safe enough for Syrians to return to Syria at  present.

We,  like Amnesty International, do not demand the conditioning of aid to respect human rights, but we urge the supporters and foreign countries to push Lebanon and the host countries to respect the rights of refugees and fulfil their obligations. We repeated this call at the Fifth Brussels Conference, but we still believe that European governments and donor countries share responsibilities related regards to taking care of the refugees and working to increase their stability and  continuing to support the neighbouring countries hosting the largest numbers of Syrian refugees.

As you said in 2015, at the request of the Lebanese government, the UNHCR stopped registering more refugees arriving in Lebanon. First of all, protection is not related to whether or not this refugee is registered with the United Nations High Commissioner for Refugees or the status of this refugee, and as I mentioned, governments, especially countries hosting refugees, including Lebanon, have obligations towards refugees and people who reside in their countries and protect and provide human rights. Therefore, whether or not they are registered with the United Nations and the High Commissioner, whether they are officially refugee status or not, regardless of the card they hold, their rights must be respected and they must be able to live under appropriate conditions and this is the most important thing.

Secondly, it is true that the majority of Syrians living in Lebanon now do not possess a legal residence permit, meaning that they do not have legal status, and this poses a danger to them. The main fear for Syrians living in Lebanon is arrest by checkpoints if they are asked to present an official identity, and this poses a danger to them. I believe that protecting them and providing them with what makes their existence legal is a shared responsibility between the High Commissioner for Refugees, the Lebanese government, donor countries, and European countries as well.

Once again, I see that this is a shared responsibility, as in the first place it is the mission of the Lebanese government, which should not deport or force any refugees to return to Syria because they will certainly be exposed to real threats to their human rights, and this undoubtedly violates international law, as the Lebanese government should never do so. Here we must acknowledge that the Lebanese government is currently facing a set of challenges, and hosting an additional million and a half people constitutes an additional challenge to the challenges that already exist, and here is where the international community must assume its responsibilities. European countries must provide better support to Lebanon and the neighbouring countries of Syria so that they can secure better conditions for the refugees. The refugees should not find themselves in a position where they have no choice but to return to Syria.