Syrian Refugee in Lebanon: “I would rather suffer here than go back to Assad’s hell” 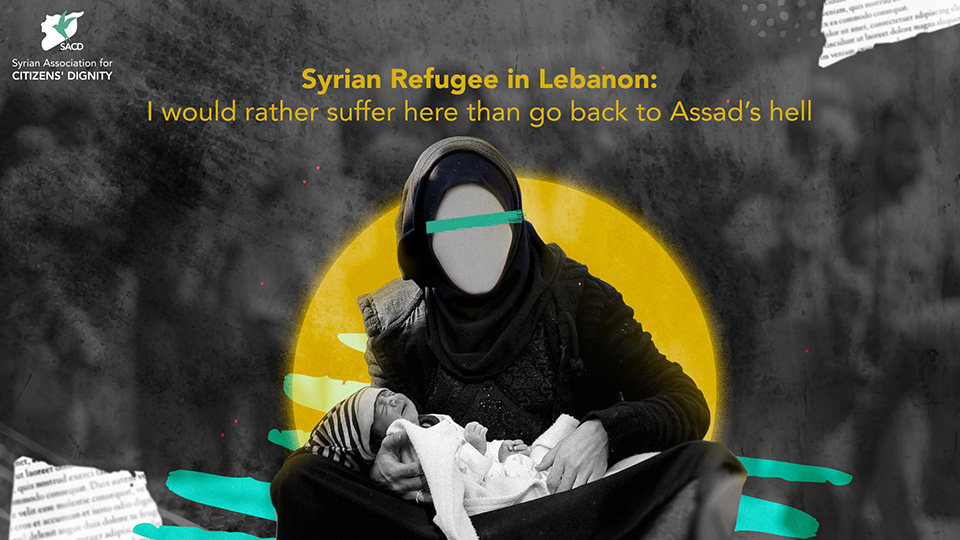 Syrian Refugee in Lebanon: “I would rather suffer here than go back to Assad’s hell”

After the Assad regime displaced the Syrians from their land, hundreds of thousands of them were forced to flee to Lebanon. Yet their suffering did not end but rather became of another kind, such as racism, the difficulty of work, the difficulty of obtaining education and the lack of shelter that provides the minimum humanitarian requirements. In addition, some Lebanese municipalities issued orders for a night-time curfew for Syrians only, despite its conflict with Lebanese laws and legislation.

The Lebanese authorities did not provide any justification for the reason for these orders issued by the municipalities or the justification for this racist measure, and the government did not direct the municipalities on how to deal with Syrians, even to impose respect for Lebanese law and stop the unjustified and inhumane measures towards the Syrians.

Despite the flow of international aid to the Lebanese government, the rampant corruption has hindered the improvement of the situation of the Syrians. According to the Lebanese government’s estimate, there are about 1.5 million Syrians in Lebanon, but the UNHCR says that it has only 855,000 registered, and UNICEF statistics indicate that 91% of the displaced Syrians live on less than $2.90 a day, and 77% of families (Lebanese, Palestinian and Syrian) do not have enough food, and less than 20% of Syrian refugees over the age of 15 hold legal residency, and as for the educational status, according to UNICEF figures Only 42% of Syrian refugee children are enrolled in school.

The Syrian Association for Citizens’ Dignity is constantly working to shed light on what the Syrians face in the various refugee hosting countries. The Association conducted an interview with A. K., who is originally from Daraa and was born and lived in Damascus in 1975. She is currently married and lives with her husband and family in Lebanon.

What forced you to flee to Lebanon?
What forced us to flee Syria is the Syrian regime’s intelligence branches chasing after my husband and us from more than one security agency, after my son was killed in a peaceful demonstration, after which we were threatened with kidnapping by unknown persons.

Where do you live in Lebanon and how would you describe the life of Syrians in your living area?
My family and I live in an area about 22 km away from Beirut called Dohet Aramoun, a Sunni area, but it is one of the expensive areas in terms of renting houses, because the areas with the cheapest living costs under the domination of Hezbollah. We cannot live with them because they treat the Syrians badly, I have children and I fear for them from the bad treatment of the people of those areas, so we chose Dohet Aramoun because its residents are of the Sunni sect.

Have you experienced any racial discrimination?
Yes, I suffered from racial discrimination when I lived in the southern suburbs of Beirut, and my family and I were threatened by so bad guys, as one of the neighbors brought two Hezbollah members to threaten me only because I refused to social contact with the neighbors and stayed at home and after that, they treated me in a very bad way, like they put garbage at the entrance to my house, at the time we didn’t even have the food of the day, so I sold my hair in order to secure the rent for the house in the Dohet Aramoun area. Most of the Syrians suffered from the curfew in most Lebanese regions and from all the sects that live in Lebanon. On the day my husband had to go out at seven in the evening to the pharmacy, the thugs gathered on him and beat him with a knife only because he violated the curfew law.

Do you have a job and how do you support your family?
I have a beautiful profession as a hairdresser and beautician, but unfortunately, it is forbidden to open a barbershop or even work in any salon because of the Lebanese government’s law not to allow Syrians to work on the pretext that the Lebanese have the priority to work than the Syrian refugee. My husband is the one who supports my family and my eldest son as well. My husband had to drop my son out of school at the age of 12 to help him secure the needs of the house, and now my son is 20 years old and he still works with his father, but unfortunately, he is illiterate, he does not know how to read and write

Do you know people who have recently returned to Syria and why did they return?
Yes, I have friends and neighbors who returned to Syria, most of them returned because of the high cost of living in Lebanon, but they went from under the ditch to the gutter. I have a friend who returned about a year ago, but she will return to Lebanon soon because when her eldest son, returned to Syria, he was arrested from the Syrian border and remained imprisoned for about three months. The accusation was that in Lebanon he dealt with a person and worked for him to extract a forged record, his mother hired him a lawyer until she was able to get him out of prison and paid two million Syrian pounds.

What happened to them when they returned to Syria?
My nephew was living in Saudi Arabia and when he returned to Syria, the regime arrested him for two years, and every time they invent a new accusation for him

Do you feel that the situation in Lebanon forces you to think about returning to Syria?
I did not think of returning to Syria, but it is still impossible for me, and the reason is that my husband is wanted and my son is of the age of the obligatory service, so there is no problem for me to sleep in the streets of Lebanon and not to return to Syria at all. We no longer have a house in Syria, we left it to Bashar and his militias.

How would I think of returning to Syria when I have relatives and my nephews, young men of the age of roses, are imprisoned in Assad’s prisons, including my nephew of four years who made reconciliation with the regime and since then we do not know where he is and in any basement or security branch, and it is forbidden to ask about him any question because they threatened my sister and Her husband that if they ask about him, he will be punished by death and field execution.

Do you feel safe returning to Syria under the current circumstances?
I do not feel safe returning to Syria, not even just thinking of that. I was visiting my family in Damascus, the living situation is very miserable, in addition to the lack of security, the domination of informants, and the despicableness of the security members at the checkpoints, despite the suffering we live in Lebanon and the high cost of living. I would rather stay in Lebanon than go back to hell. Assad and his unjust regime

How do you see the future of Syria?
I do not see any future in Syria, especially after I visited it and saw the situation of the country, which has become more corrupt than its corruption before the Syrian revolution, and currently, I am looking for a way to immigrate to Europe. My family and I, frankly, tell you “people in Syria live just because it is not their time of death under the humiliation and oppression of the Corrupted and oppressor Assad regime”.