In a recent statement, Turkish Foreign Minister Mevlut Cavusoglu said, “Those who were forced to leave their homes, including those residing in Turkey, must return to their homeland, and for this we seek to achieve lasting peace in Syria.”

However, the Association stresses that the safe environment cannot be compartmentalized and must be achieved on all Syrian soil so that the displaced Syrians can willfully return to their cities and places of origin.

In study conducted by the Syrian Association for Citizens’ Dignity in 2020, which included more than a thousand displaced Syrians, 90 per cent of the participants considered that security policies were the main reason for their displacement, and 81 per cent of the participants confirmed that “the departure of the regime and its main figures” is the one of the main conditions for their return.

The Association also stresses that the primary goal of the political process must yield in the imposition of international resolution on all parties, including the Syrian regime and its Russian ally. This is in addition to the achievement of transitional justice and the exclusion of the perpetrators of war crimes and crimes against humanity against Syrians from the future of Syria. The goal of the political process, as defined by UN resolutions, is not reconciliation and normalization with the regime. Bitter experiences in Syria, and recently in Ukraine, have proven that Russia cannot be a guarantor, but rather complicit to the regime and a perpetrator of war crimes.

Diverting the compass of the political process, diluting international resolutions, and normalization with the regime will not contribute to securing the conditions for a sustainable political solution in Syria. But quite the contrary, it will lead to more chaos and instability in Syria and in the region as a whole. Such moves will deprive the Syrian people and their genuine allies of pressure cards on the Syrian regime, and will not render the conditions of a safe environment for the return of the displaced. The premature and unsafe return of displaced Syrians will inevitably lead to opposite waves of migration to escape the Syrian regime and the harsh security conditions.

Since the beginning of the peaceful protests in Syria, Turkey has thankfully stood by the Syrian people and their rightful demands, and we are confident that the Turkish government realizes that normalization with the regime will not provide any real solutions to the threats posed by the current situation in Syria. We have no doubt that Turkey realizes that the Syrian regime is no longer able to unite Syria and is no longer the legitimate and authorized party to do so. We also reiterate that the establishment of a secure environment throughout the Syrian territory through the correct political path is the only solution for the return of the Syrians to their country and the sole way to protect Turkey’s interests and national security in a sustainable manner. 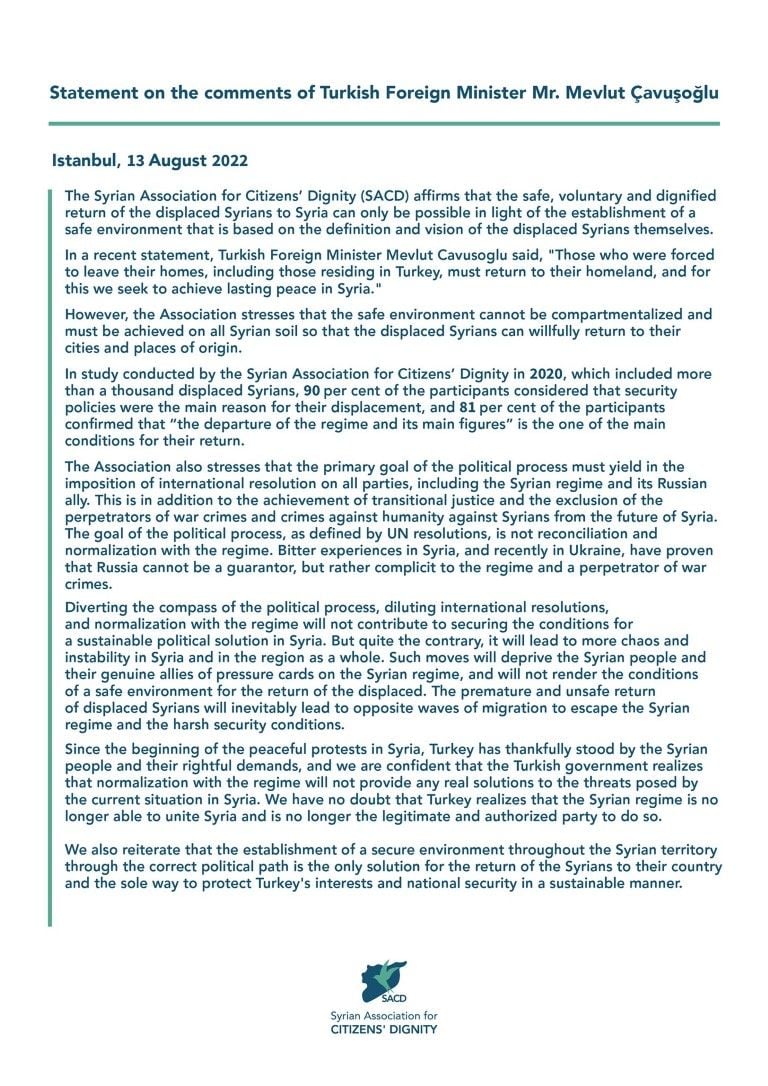