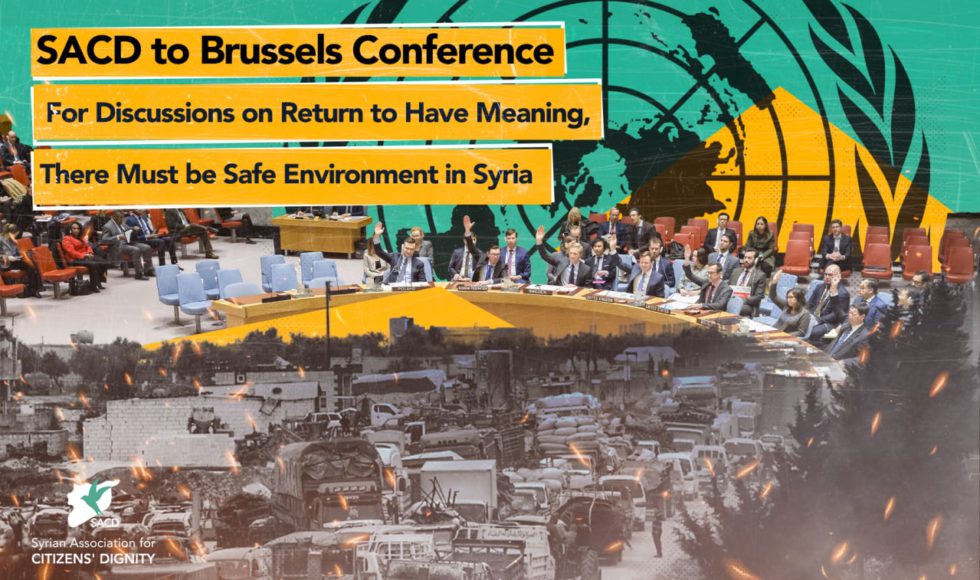 Idlib, 9 May 2022 – As the “Brussels VI Conference on Supporting the future of Syria and the region“ opens today, more than 13 million displaced Syrians face an increasingly dire prospects with growing unilateral calls from some hosting countries for the return of Syrians refugees to an unsafe Syria, without any guarantees for the minimum conditions for a safe, voluntary and dignified return.

Most of these calls and initiatives are based on ill-conceived ideas or directly promoted by domestic political agendas. They are all leading to one inevitable type of ad-hoc and unsustainable solutions that will cause displaced Syrians further suffering and despair, while at the same time these improvised short-term solutions have the potential of causing long-term negative reverberations across the region and Europe that would defy their own purpose.

It is crucial for participants and donors at the Brussels Conference 5 (or 6) to have these facts in mind when proposing and working on future solutions for Syria, and to understand that it is very premature to even discuss the return of refugees at this point. Instead, the focus should be on thinking about long-term sustainable and comprehensive solutions that would serve the interest of all concerned parties starting with Syrians themselves. This is where the concept of the “safe environment” emerges as the only viable holistic approach to address the current challenges. While it might seem that the hardest option yet it is the only pragmatic and realistic approach at the same time.

The latest SACD briefing “What needs to happen before voluntary, safe and dignified return to Syria is possible?” provides a quick glimpse into the extensive work that the SACD have done over the last few years in order to arrive at a realistic vision of what a safe environment in Syria – from Syrians’ point of view- would look like, and the roadmap towards its implementation. The document also sheds some light over the current situation on the ground and how we believe it should reflect in UNCR’s protection thresholds, which are strongly linked to the safe environment concept.

This roadmap is effectively a three-phased framework that divides the return process into three very distinct main phases, each with its own pre-requisites, goals, risks, and a package of practical measures to take into account. These phases are:

Such a phased approach is driven by the complexity of the return operation when it is analysed from an operational point of view rather than from a theoretical or even narrative perspective. Segmenting such monumental undertaking is a must, because every phase has different prerequisites and objectives, and every phase lays the ground for the following phase, which would be different in work areas, actors, tools and results. Most importantly each phase has to gain the displaced Syrians’ confidence in the whole operation, and show gradual yet tangible progress and a string sense that guarantees by credible international actors are in place.

The reality in Syria is such that despite the dire conditions Syrians are suffering in displacement, whether internally or in some of the host countries, they are still unwilling to return except for small numbers of those who are forced to do so for various reasons. This is primarily due to the fact that the conditions which caused the displacements are still in place and active and the regime continues to repress the areas it controls.

When the findings of SACD research are placed in the context of the UNHCR’s own criteria – protection thresholds – we see that the vast majority are far from being met, painting a dire picture for any refugees or IDPs forced to return before the minimum conditions are in place. In particular, the thresholds “the physical, legal and material safety of refugees and returnees is ensured” and “every individual’s decision to return is informed and genuinely voluntary, without any coercion” are far from being met, as the SACD’s own research clearly demonstrates. UNHCR must be reporting publicly on this reality, both to the displaced Syrians so they can make informed decisions about return, but also to international policymakers and donors.

For a detailed breakdown of descriptions of protection thresholds not being met see the attached Annex.

Our message to key stake holders and host states is clear: nowhere in Syria is safe to return. We emphasize on the danger of misleading Syrians about the existence of a safe environment in Syria already, or moving towards some ad-hoc solutions that would only reinforce further demographic change in the country.

Internal progress of host countries will certainly not be accomplished through the politicization of refugees. On the contrary, this will only end in dehumanizing rhetoric and behavior, creating more problems and distracting from the main issue in Syria: pushing forward the political process with a focus on the safe environment and securing the conditions for a real safe, voluntary, and dignified return as defined by Syrian displaced themselves.

Premature return will result in no solution, it will violate the lives of Syrians and contribute to lasting instability of the region. The waves of displacement and instability will continue safe environment is in place.

The political process must be reformed to elevate safe environment to the top of political agenda. Office of the Special Envoy must work on focusing the process on securing the rights and minimum conditions for return expressed by refugees and IDPs as a fundamental part of any political solution and its individual elements, such as the new and credible constitution or elections. Adventurism and dubious “pilot projects” on return must be rejected and abandoned.

UNHCR must take into account the minimum conditions for return defined by the displaced Syrians when determining the minimum standards for return. It must meaningfully engage with Syria’s displaced in conversations on the reform of the Regional Operational Framework and to assess the current thresholds and adjust these in line with their views. UNHCR must also provide clear and timely information about the current conditions, its ability to provide access to and protection of returnees in Syria and refugees in host countries that may be in danger of forced or premature return, as well as the work that needs to be undertaken to meet the minimum conditions for return.