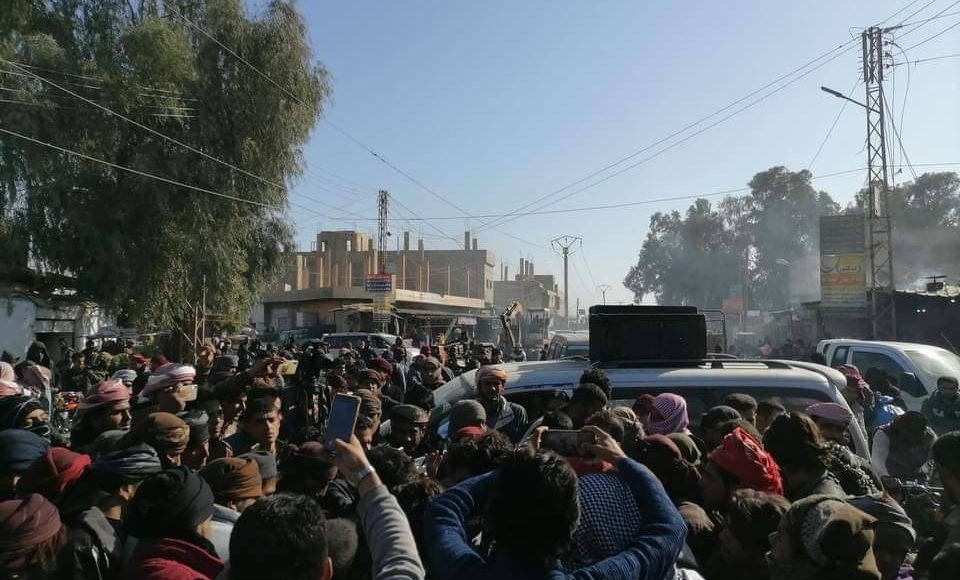 Deir Ezzor, 2 February 2021 – Syrian Association for Citizen’s Dignity expresses serious concern at the actions of the de-facto authorities of the Syrian Democratic Forces (SDF) in Deir Ezzor, which are causing an increase in displacement and insecurity in the area. We note with concern that the different protests in the region have now become interrelated and that the policies of the Autonomous Administration of North and East Syria in Deir Ezzor are increasing the fears among the local population in the area, pushing them to leave their towns and villages.

The main grievance of the people of the area is related to the forced conscription of teachers and students into SDF and the related measures targeting this important group in the wider community.

The situation started seriously deteriorating in December 2020 when teachers, from all levels of the education system, from the villages and towns of Deir Ezzor, were summoned to compulsory military service with the SDF. In addition, all the Autonomous Administration Committees were ordered to report the names of their employees who were born between 1990 and 2003 to be sent to the compulsory recruitment camps. Any employee who refuses to join without presenting a legal reason was to be expelled from the job.

Dozens of teachers from Hajin, Granij, Al-Bahra, Al-Shahail, Al-Basira, Al-Shafa and Abu Hamam, and other towns in Deir Ezzor rejected the order from 20 December, refused to submit their names to the recruitment offices and went on strike.

On 21 December, teachers and students, along with civil-rights activists, held demonstrations demanding withdrawal of the decision on compulsory recruitment of teachers, an improvement of the living conditions and the right to self-governance in these areas. The Syrian Democratic Forces (de facto authorities) responded by arresting 42 teachers in the northern and eastern countryside of Deir Ezzor.

As a result, demonstrations spread to other areas in Deir Ezzor, such as Al-Shahail and Al-Busirah. Dozens of students and teachers raised banners with clear messages: “Engineers and the doctors exist thanks to teachers” and “The absence of teachers from school leads to the spread of ignorance and illiteracy”.

The movement which developed as a result of the de facto authorities’ actions targeting teachers declared a school strike on the 7th of January 2021, when schools closed their doors in the villages and towns of Granij, Al-Bahra, Al-Sha`fa, Hawaij Thiban and Abu Hamam.

We believe this decision impedes the chances of stability and will cause further displacement as it denies people of the area the freedom to engage in work with NGOs, cutting any alternative sources of income for teachers with the aim of exerting further pressure on them. In addition the decision aims to monopolize relations with NGOs in order to control communication and prevent data about the living conditions and social dynamics in the region collected by local activists to reach outside audiences.

SACD holds that the chances of building stability in the regions of northeastern Syria are in sharp decline as a result of the Autonomous Administration’s policies that increased tension in the society, especially with the lack of concern of civil peace, the deterioration of the security situation and the high costs of living.

One of the sources of the current problems is the Law of Self-Defense, promulgated by the Autonomous Administration in December, which has disrupted people’s lives and restricted freedoms as the SDF Military Police set up checkpoints and started arresting young men for compulsory recruitment and transferring them to the “Self-Defense Duty Centers”. Young people, especially professionals and teachers, are no longer able to move freely outside their places of residence.

The families of these teachers forced into military conscription will lose their only source of income. With the rise of prices and the decline in the exchange rate of the Syrian pound, their lives are rapidly becoming more difficult. As the new conflagrations on the front lines in the western and eastern countryside of Raqqa governorate escalate, the Syrian Democratic Forces is likely to use the people from the training centers as cannon fodder on these frontlines. This is increasing the fears and suffering of teachers and their families, and drives the rejection of forced recruitment despite all the pressures exerted by the de facto authorities.

The growing protest movement is demanding an end to the targeting of teachers and students, but grievances are many and include the rejection of the SDF’s collusion with the Syrian regime and Russia, complaints about the new school curricula and increasing restriction of freedoms in the area.

SACD believes that the international institutions and key states involved in the area take note of the effects of the SDF’s arbitrary decision on forced recruitment of teachers in Deir Ezzor and other decisions affecting the local population adversely. We strongly believe that these decisions need to be reversed to prevent further displacement from the area. There needs to be more local dialogue; the civil, military and security bodies in the villages and towns of Deir Ezzor need to be restructured; human rights organizations need to be allowed to operate in northeastern Syria, including those registered by displaced people who must be allowed to organize and communicate freely with displaced Syrians elsewhere.