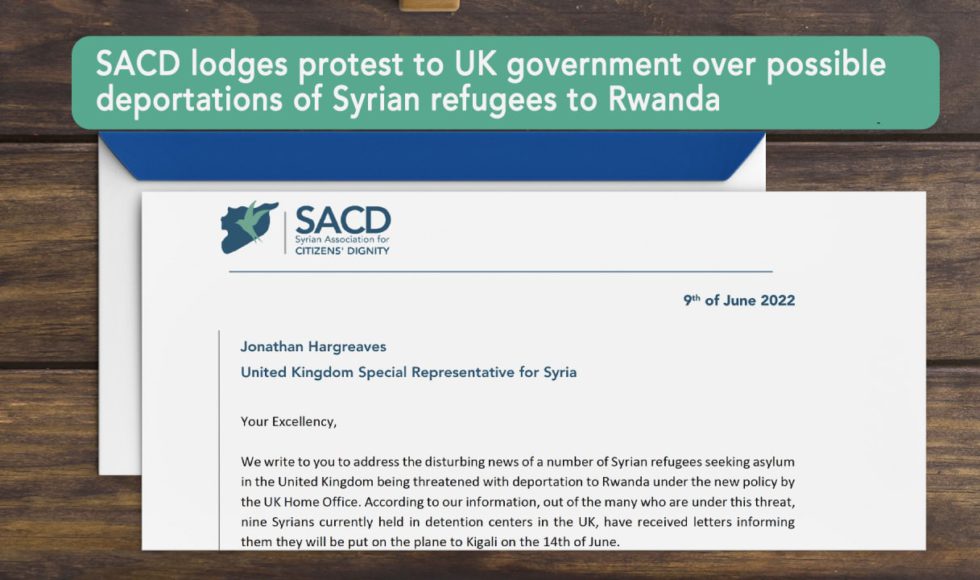 Syrian Association for Citizens’ Dignity (SACD) joined numerous organisations and public figures calling on the UK government to reverse its decision to deport asylum seekers, including a number of Syrian refugees, to Rwanda.

In a letter addressed to Jonathan Hargreaves, the UK Special Envoy on Syria, the SACD Board of Trustees expressed dismay at the “disturbing news of a number of Syrian refugees seeking asylum in the United Kingdom being threatened with deportation to Rwanda under the new policy by the UK Home Office.” According to the information reported by refugee rights’ activists in the UK, out of the many who are under this threat, nine Syrians currently held in detention centers in the UK, have received letters informing them they will be put on the plane to Kigali on the 14th of June.

“This horrendous decision has shocked displaced Syrians everywhere as a step that comes at a time when they are already facing increasing pressure to return to an unsafe Syria in countries like Denmark, Lebanon or Turkey. We believe there is no need to remind of the persecution, torture and suffering which those Syrian refugees – who managed to reach what they believe was safety in the United Kingdom – are fleeing from. We were thankful for your statement from January of this year where this reality was acknowledged when you asserted it following the reversal of the Home Office’s decision to start sending people back to Syria: “UK position remains unchanged: Syria is not currently safe for refugee returns. We are not sending people back to Syria.”’, states the letter.

SACD maintains that to now send these people to Rwanda, a country where no Syrian refugee, of the 13 million displaced, ever attempted to flee to and has no connections with whatsoever, would amount to a cruel punishment causing immeasurable fear, anguish and distress to those targeted with this policy. “According to our information, a number of Syrians who have been threatened with deportations to Rwanda have already started a hunger strike at the Brook House detention center. They have made it clear to our sources that they are ready to die before being deported to Rwanda,” wrote SACD trustees.

Border Criminologies, an international network of researchers, practitioners, and those who have experienced border controls, in their letter addressed to the UK Government, have warned that “there is widespread evidence documenting the effects of offshore processing on the mental and physical health of those affected (see MSF’s report here, and additional studies on incidences of self-harm here). Putting those seeking asylum ‘offshore’, away from scrutiny, has in other contexts resulted in systematic inhumane treatment which the British government should not condone (see Amnesty here). Evidence from the Australian system, for example, includes inadequate living conditions, instances of sexual and physical abuse by staff against asylum seekers, inadequate medical and psychological treatment, and failure to respect the rights of children (see here).”

“We fully endorse this view and plead that Syrian refugees or any refugees fleeing persecution are not subjected to this inhumanity,” stated the SACD letter to Hargreaves.

SACD echoed statements of many human rights groups and individuals who also warned that the plans to deport refugees, including Syrians, are contrary to the UK’s obligation under the Refugee Convention and the European Convention on Human Rights, as they will likely expose them to the use of prolonged and arbitrary detention, interferences in family and private life, risk of inadequate safeguarding screenings, lack of access to fair and efficient asylum screening procedures and appeals processes, inhumane living conditions, lack of access to appropriate medical facilities, the denial of timely durable solutions and, most worryingly, refoulment.

“We are aware of the ongoing legal challenges to Home Office’s policy and hope they will provide relief to all refugees threatened with deportations to Rwanda. However, we strongly believe that the policy should be abandoned and that Syrian refugees who managed to reach the UK should be allowed to claim asylum there.

Dear Mr. Hargreaves, we strongly believe that your previous actions and statements illustrate a concern for the fate of displaced Syrians that we in the Syrian Association for Citizens’ Dignity share. With this in mind we express our sincere hope that you will do everything in your power to relay our deep concern to the relevant officials of the UK Government and be the voice of Syrian refugees in the plea to reverse this decision which not only threatens those directly affected but also sets one of the worst precedents in the way host governments are treating Syrian refugees,” concluded the SACD letter addressed to the government of the United Kingdom.

UK government’s Rwanda deportation policy is now under judicial review following legal challenges by a number of affected individuals and human rights groups. SACD maintains that the policy must be reversed if the basic rights of Syrian and other refugees in the UK are to be protected.