International donors must help Lebanon, but also ensure the rights of Syrian refugees in Lebanon are protected 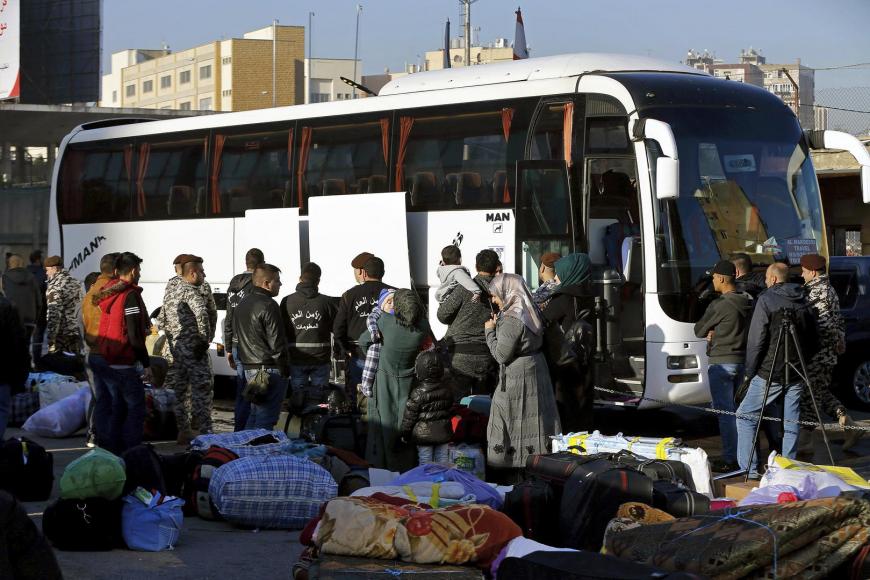 Beirut, 01 December 2020 – As international donors gather for the ‘Second International Conference in Support of Beirut and the Lebanese People’ which aims to support Lebanon in overcoming the consequences of the recent devastating explosion in Beirut’s port, the Syrian Association for Citizens’ Dignity calls on everyone involved to include Syrian refugees’ interests and rights in their plans and ensure that the government of Lebanon remains committed to international law on protection of refugees.

Displaced Syrians remain thankful to the people of Lebanon for their hospitality and remind the world that Lebanon has taken in some 1.5 million Syrian refugees. The Syrian refugees did not fail to express their thanks and gratitude, and they were at the forefront of the initiative to contribute to the work of saving the innocent and responding to the tragedy of the Beirut explosion. However, we are very concerned by recent statements and indications from the Lebanese government regarding the possibility of a premature return to what is unsafe and extremely dangerous situation in areas under the control of the Syrian regime without achieving the conditions for safe, voluntary and dignified return.

The first source of our worry is a document adopted by the Lebanese government in July this year titled “the General Policy for the Return of the Displaced”. The policy came as a result of consultations and discussions within the Lebanese government and puts Syrian refugees in the situation where they essentially face a choice between returning to areas under control of the regime which they fled in the first place, or to try and flee to a third country. The policy is seen by most human rights organisations as a clear evidence of the Lebanese government’s overriding of all international treaties relating to the rights of the displaced people and the agreements which have so far governed the assistance to the Syrian refugees specifically.

It is extremely worrying that the Lebanese government considers that “the security situation in Syria has improved, as most of Syria has become
safe”, which was repeated in the recent “conference on return” organised by Russia in Damascus that was boycotted by the EU and most other countries. This assessment of the security situation in Syria is patently inaccurate and should be reevaluated.

The Syrian regime did not abandon its oppressive practices of arbitrary detention, forced conscription, discriminatory HLP legislations and decrees, forced disappearance, illegal killings and torture. There is ample evidence provided by SACD and numerous other organisations of such practices continuing to this date across the areas controlled by the Syrian regime.

In addition, on 19th November 2020, the European Court of Justice (ECJ) ruled that refusal to perform military service in Syria gives entitlement to recognition as refugee. This decision was made on the basis that those who refuse to perform military service under the Syrian regime may be perceived as opposing the regime, and hence could face fear of persecution upon their return. In spite of this, cases have been reported of Syrians fleeing forced conscription being handed over by the Lebanese government to the Syrian regime, which violates the Convention against Torture and Other Cruel, Inhuman or Degrading Treatment or Punishment in article 3 “No State Party shall expel, return (“refouler”) or extradite a person to another State where there are substantial grounds for believing that he would be in danger of being subjected to torture.”

We remind the UNHCR is the ‘guardian’ of the 1951 Convention and the 1967 Protocol, and hence, the responsibility falls upon the UNHCR to ensure that the relevant international mechanisms are in place to prevent the Lebanese government from implementing the plan from its document. Even if Lebanon did not sign the 1951 convention, yet it must adhere to the basic principles of international law regarding forced return.

The Lebanese return plan for Syrian refugees violates international conventions and treaties that protect refugees from forced return and criminalize any attempts to force refugees to return to the country they fled, while the party violating human rights is still in power. Tomorrow’s conference is an opportunity to remind the Lebanese government of its obligation to uphold and respect international law with regards the rights of refugees.

The Lebanese government should reevaluate its assessment of the security situation in Syria and explain on what basis it is claiming that a safe environment exists. In turn, the international community, particularly France and the UNHCR, should be firm about their commitment to the principles of protecting refugees. Any assistance pledged at tomorrow’s conference must be made conditional on a full respect for the international law and the rights of refugees under the jurisdiction of the Lebanese government.

We remind all participants in the conference that the Syrian refugees share with our Lebanese brothers and sisters the harsh economic conditions the country is going through, and we would like to reiterate on this occasion the need to put in place correct and effective mechanisms to ensure that the aid allocated to Syrian refugees reaches them directly, as this step will help prevent the forced return of many Syrian refugees, who may be forced to return to Syria due to the difficult living conditions.

The Syrian Association for Citizen Dignity confirms once again that securing a safe environment according to the vision of displaced Syrians is the only way to secure the conditions for safe, voluntary and dignified return, and this environment cannot be achieved without a comprehensive and sustainable political solution with real international guarantees.