Eleven years later: displaced Syrians insist on their struggle for a free and safe Syria 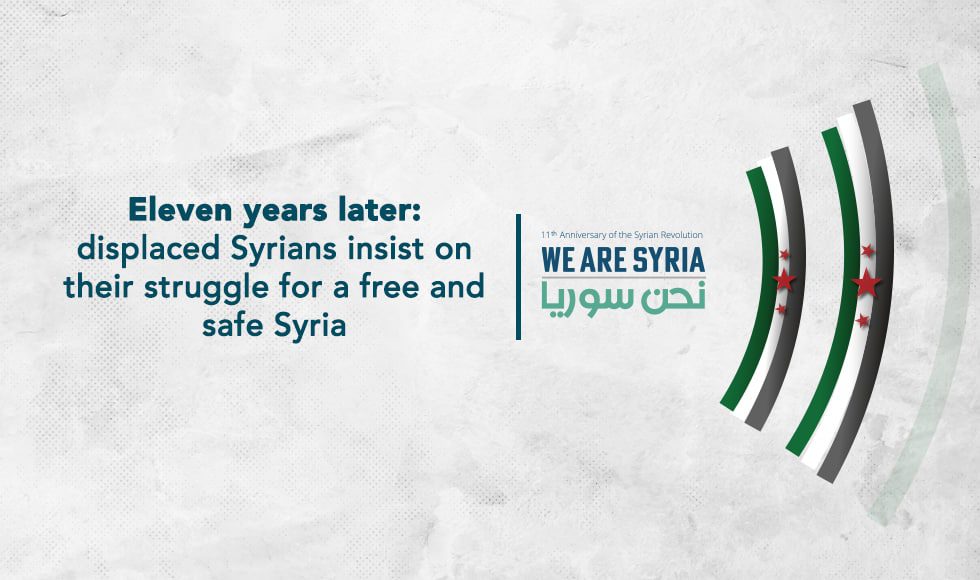 Eleven years later: displaced Syrians insist on their struggle for a free and safe Syria

Istanbul, Beirut, Idlib, 15 March 2022 –After more than a decade of peaceful demonstrations in Syria calling for freedom and dignity and eventually demands to overthrow the regime, the struggle of the Syrians continues despite being subjected to repression, killing, torture, and war crimes that have killed at least half a million Syrians and have displaced more than half of the Syrian people.

Although the suffering of the Syrians has been clear to the whole world for more than ten years and is the most documented in human history, and although the crimes of the Syrian regime and the crimes of its Russian ally were known and open to all, the invasion of Ukraine revealed again and reminded everyone, leaving no room for doubt, of the level of criminality that the Syrians have been subjected to and are still being subjected to by the Russian regime. We as Syrians have the full right not only to fight against the Russian invasion and the suppression of the Syrian regime, but to struggle for a dignified life in our country without giving up any right, as we are no less than others. It is our right to aspire to the best life possible.

The current tragedy of Ukraine was born in Syria, when the Russian regime was allowed to commit war crimes and displace Syrians without any punishment or accountability. When fundamental solutions to the Syrian issue, especially the displacement crisis, were not properly addressed. Today, the world is witnessing that again, after the Syrian people have been warning against it for many years. Therefore, we reaffirm that the only solution to the tragedy of the displaced Syrians and its dangerous repercussions on the region and the world is to create a safe environment in Syria, and that this safe environment with all the radical changes necessary to achieve it is the cornerstone of the political solution in Syria.

Normalization with the Syrian regime and trying to impose it as a fait accompli on the Syrians is a crime in itself, but its medium and long-term effects will be catastrophic for neighboring countries and Europe, which SACD thoroughly explained at the Ankara and Copenhagen conferences in recent weeks. Normalization is a fatal mistake and an illusory necessity based on a wrong perception of the reality in Syria and a limited understanding of the consequences of this matter for the Syrian people and stakeholders in Syria.

On the anniversary of the start of the peaceful demonstrations and civil struggle in Syria, the displaced Syrians demand the international community to give them what they have given the Ukrainian people: support and humane treatment. They demand the international community not to impose on the Syrians what it did not impose on the oppressed Ukrainian people: normalization with the tyrants and acceptance of the occupier and forced return. We can never imagine that countries and UN organizations will ever ask Ukrainian refugees to return to Ukraine before achieving a safe environment for all Ukrainians.

On this great anniversary of the greatest struggle for freedom and dignity in contemporary history, SACD reaffirms the need for Syrians to rally around a popular human rights movement that impacts the political solution and carries the voice, demands and aspirations of Syrians to decision-making centers in a literal and influential manner, which SACD has worked on in recent years. And that we, as Syrians, are not out of the equation unless our demands are met, and that our right to a safe, voluntary and dignified return to our country will not be guaranteed and will only be achieved by our struggle and solidarity. We have witnessed and experienced how pinpoint political advocacy supported by genuine popular demands and a solid social bloc has borne fruit in influencing specific policies, and our goal is to achieve more of this impact on a higher and more comprehensive scale.

We salute the steadfastness and struggle of the Ukrainian people, because we, as Syrians, are the most capable of understanding their feelings and plight. We salute all Syrians, who no matter how much history writes about their struggle, it will never do them justice. Today everyone, Syrians or non-Syrians, must realize that what we have done was truly a miracle.

And we assert that we will continue on our path.