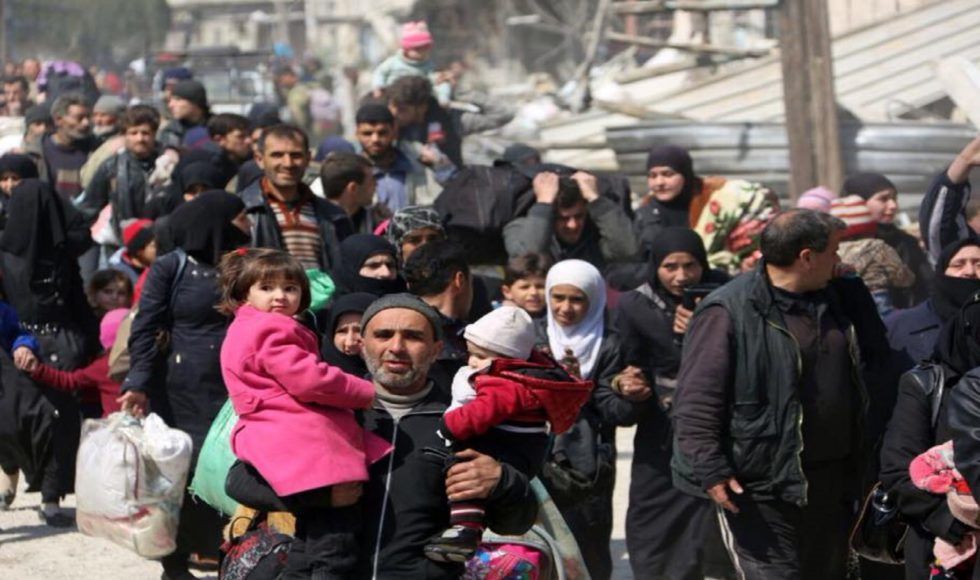 The month of April marks the third anniversary of the catastrophic and painful displacement of Douma. After the imposed siege that lasted for years and dozens of attempts by the regime to storm the region and end the presence of the opposition, the Syrian regime, with the absolute support of the Russian forces, began a military campaign that lasted nearly two months. The Russian and regime forces succeeded in eating off large parts of eastern Ghouta, which was controlled by opposition groups, and displaced its people to the opposition-controlled areas in northern Syria.

The regime initially took over Harasta, then the central region of Eastern Ghouta, and parts of Douma countryside, while the opposition remained in possession of a small part of Douma, the capital of Eastern Ghouta and the most important metropolis in the Damascus countryside. Thousands people inhabited the town’s basements and shelters. Following the siege, negotiations took place between Russian officers and representatives of the opposition groups present in Douma with the aim of ending the military operations and bombing.

However, negotiations with Russia did not last for long. On the Friday of April 6th 2018, the only peaceful Friday were people had the chance to come out of basements and shelters after two months of heavy, unprecedented bombardment and shelling, and shortly after the return of the people from Friday prayers, and children were playing under the sun breathing some fresh air, the Russian and Assad forces began their attack on the city.

The Syrian regime and its Russian ally did not spare any heavy artillery or weapons to bomb the innocent civilians, starting with the bombing with rockets, then raining down the city with Smirtch shells, mortars and field artillery, all the way to throwing barrel bombs. The operations were run from several military airfields, including Hmeimim airport.

The painful scene at that time was crammed with tons of shells and rockets poured over the heads of civilians as the last pressure card to subjugate the city, even if that cost the killing of thousands of civilians. While the mothers were crying and begging for steps to be taken to save their children’s’ lives, or the remains of those who were martyred, the residents were keenly watching scenes of the destruction and burning of their property without even attempting to put out the fires.

The aggression continued for two days without any ceasefires. The dust of rockets, shells, and barrel bombs blocked the sunlight of the second day of this aggression from the eyes of the people. As if the heavy bombing was not enough, the residents were surprised at exactly 8 in the evening on April 7th, 2018 when two missiles carrying chemical warheads fell on two residential areas of the city, one of them exploded while the other didn’t.

Dozens of women, children and elderly people lost their lives under this chemical attack. Meanwhile, the regime threatened civilians with one thousand chemical missiles, two of which fell, and the rest were ready to be launched.

This threat comes and drains what is left of the people’s ability to withstand and resist, which included the threats issued by the field command of the Russian forces that the bombing will target children, women and the elderly before the youth and fighters.

The Russian assault on the region ended the next morning with the surrender of the city and the displacement of thousands of people to northern Syria in a new forced displacement orchestrated by Russia to empty the area from its people. The people who remained in the area not only faced harassment and persecution but also confiscation of their property and dignity, despite all Russian promises to provide safety and security to those who stay.

Today, thousands of displaced people from the city of Douma are suffering from the pain of displacement. However, they reject all the regime’s offers for a return without guarantees to achieve a safe environment that paves the way for a dignified and voluntary return. Nevertheless, they haven’t lost hope in holding Russia and the regime accountable for their crimes of targeting civilians, and for the international community to hold Russia accountable for its collusion with the Syrian regime for repeatedly attacking civilians with chemical weapons.

Despite Russia’s pledge to the international community to destroy the regime’s chemical weapons, under Resolution 2118 that followed the chemical attack on Ghouta in the summer of 2013, yet Russia and the regime continued to obliterate the features of crime and presenting false witnesses by intimidating them, with regards to both the regime and Russia’s involvement in the crime of forced displacement and violation of HLP rights of those who fled. As long as Russia continues to support the criminal regime of Bashar Assad, it is impossible to achieve a safe, neutral and appropriate environment for the dignified, safe, voluntary and sustainable return of the city’s displaced people to their homes and properties, as well as compensation and reparation for them.