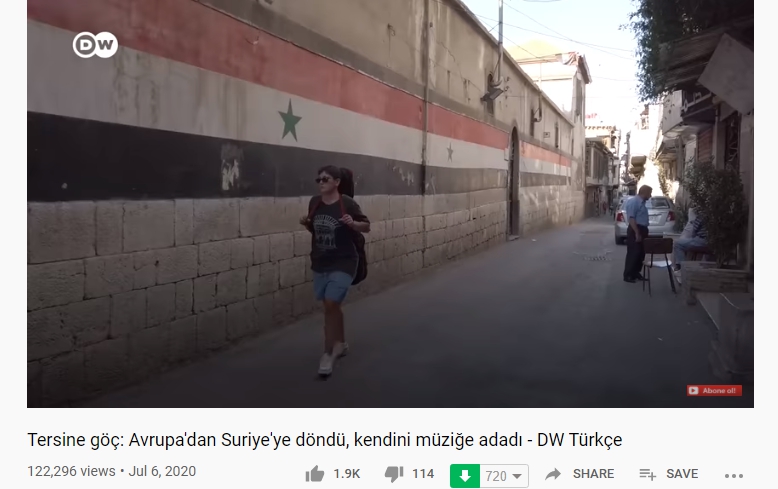 Media has a great deal of responsibility in covering refugees and their plight. The first principle must always be “do no harm”, the reporting must not in any way endanger or further deteriorate the life of refugees who are the subject of the report. We believe that Deutsche Welle has failed this test and through its incomplete, decontextualized and misleading reporting contributed to the danger faced by Syrian refugees who could become victims of a forced return to Syria from Europe and other countries.

On 10 July, Deutsche Welle published a video featuring a story of Nour, a Syrian girl who leaves Syria to come to Austria and then returns to Damascus without any obstacles or problems. Her leaving Syria and stay in Austria is described as a rich cultural and personal journey, her return safe to a home unaffected by the horrific reality of Syria under the regime of Bashar Al Assad. The video spread like wildfire among the Syrian refugees in Germany but also in Turkey, as it was also produced in Turkish language. It shocked the Syrians who saw it, while sparking an avalanche of hostile and negative commentary especially in Turkey. “Look how safe Syria is, why do we have to keep all these Syrian refugees?” was a common message in response to the video in Turkey, which hosts almost four million refugees from Syria, more than any other country. They could not be faulted for believing that the situation in Syria was very different to that known in Turkey and by anyone who follows Syria. The video presented a parallel reality, which does not exist for the vast majority of Syrians who were forced to flee their homes.

“I was forced to leave my country due to the violence and persecution suffered by me and my family, inflicted upon us by the Syrian security forces. I did not leave Syria and come to Germany to learn music or to sing, I fled to save my life. I cannot go back home because of the same security forces and their same practices,” says Mariam[1], who worked as a translator in one of the refugee camps in Germany and lives in Berlin. There were three girls who were not older than 25, all of them were raped by the Syrian regime forces and they came to Germany with the help of some people. How is it safe for these girls to return to a place where they were subjected to torture, intimidation and rape? It is shameful for the press to present this rosy picture to the Syrian girls who had to flee with their families or alone from the injustice and threat of the Syrian forces. If the girl in the DW report migrated to Austria without any threats and returned with ease, this does not mean that the channel can present this without any background explanation about how unrepresentative this is, without at least mentioning the reality and pain of the vast majority of displaced Syrians, especially women and children.”

Nazir from Deir Al-Zour was arrested in 2012 for being politically active at the University of Tishreen, where he was studying dentistry. Today he lives in Göttingen. “The channel had to produce a story which would also explain the myriad reasons for the displacement of Syrians, the other side of the story, one where people are dying in detention and torture and disappearance. A realistic story that expresses the suffering of Syrians. So that people know that 13 million Syrians did not migrate for tourism or to experience culture or to sing. My return to Syria is not, as the report depicts, easy and safe, but it is impossible in the current reality in which Assad is still usurping power and all the security and military institutions of the state are involved in human rights violations, not to mention the presence of the Russians, Iranians and Hezbollah who are engaging in the same repression.”

When I showed the video to Layla, who today lives in Dresden, she said “I cannot return to Syria and most of my relatives have been tortured and arrested. One of them wears gloves out of embarrassment because his fingernails were torn out and his fingers badly broken by the torturers from the security branch. How can I explain this to any German who has seen the report and convince them the report does not reflect reality, that we cannot return as long as Assad, the Russians and the Iranians are in power?!”

We from the Syrian Association for Citizens’ Dignity held several meetings with Syrian refugees in Germany and Turkey about this report. They were all stunned by the content and very worried about the reactions to it. Especially those in Turkey, as they could not understand what was the reason to produce the report in Turkish, as if there was an intent to cause hostile reactions towards Syrian refugees and exacerbate the problems between Turkish community and Syrian refugees there.

The Deutsche Welle report runs counter the reality in Damascus, which is portrayed in such a misleading way in the story of Nour. The Syrian Network for Human Rights (SNHR) documented at least 25 arbitrary arrests in Damascus and its surroundings in the month of May, while in June alone the number reached 112 detainees. These numbers are likely lower than the actual rates, due to not all cases reaching the documentation organization. More than 40 raids were conducted by the regime forces on residential homes in the neighborhoods of “Al-Hijaria” and “Abd al-Raouf” in just one city–Douma, in Damascus countryside–during which they arrested approximately 30 young men who failed to join the ranks of the regime’s army. Similar raids occurred elsewhere.

According to SNHR, the regime continues to pursue those who settled their security situation in areas that have signed so called “reconciliation agreements” with the regime, including those in Damascus suburbs. SNHR and other human rights organizations have documented 684 cases of arbitrary arrest in Damascus and its surroundings since the beginning of this year. This is the reality of “safe home” Nour returns to.

The Deutsche Welle ignores this reality, but also the assessment of the situation in Syria by the German government itself. In a statement issued on 11 June, made after Germany extended the moratorium on repatriation of Syrian refugees, the German Foreign Ministry clearly stated that “there are still many risks for refugees in Syria, whether due to the numerous militias and their checkpoints or the weapons in the hands of these militias or those affiliated with the regime, who still use them without mercy against the Syrian people through its many intelligence services.”

The damage done by the reporting of the kind practiced by Deutche Welle is serious and potentially life-threatening for Syrian refugees. This is best illustrated by a recent decision of the Danish Immigration Service to deny asylum to three Syrian refugees from Damascus on the ground that it is “safe to return”. Their decision was based on very flawed information and reports like this are bound to make matters worse in similar situations.

Syrian refugees taken in by Germany are thankful for the hospitality and support they received. And many of them want to return to their homes in Syria one day, our research confirms that. But for their safe and dignified return to be possible, there must be significant, fundamental changes to the situation in Syria. There must be a political solution which will guarantee the rights of all citizens, including the displaced Syrians, to life, security, property and freedom. This simply does not exist in Syria right now and it will take a robust international guarantee before the return can happen. To promote a false reality, such as that depicted in the Deutsche Welle video, creates an untenable position for Syrian refugees, increases the hostility against an already vulnerable group which suffered greatly, and contributes to what can only be called forced return. Deutsche Welle needs to recognize its mistake and do justice to Syrian refugees by reporting on the reality of a vast majority of them, who escaped death to come to Germany and are long way from being able to return home in safety. However, it doesn’t seem likely that the DW editors recognize their responsibility. We sent this text to the DW editorial staff through its reporter in Istanbul, with a request for the other side of the story to be reported on their pages. All we got in response was silence.

[1] Not her real name, identity protected due to possible threats to the security of her and her family.