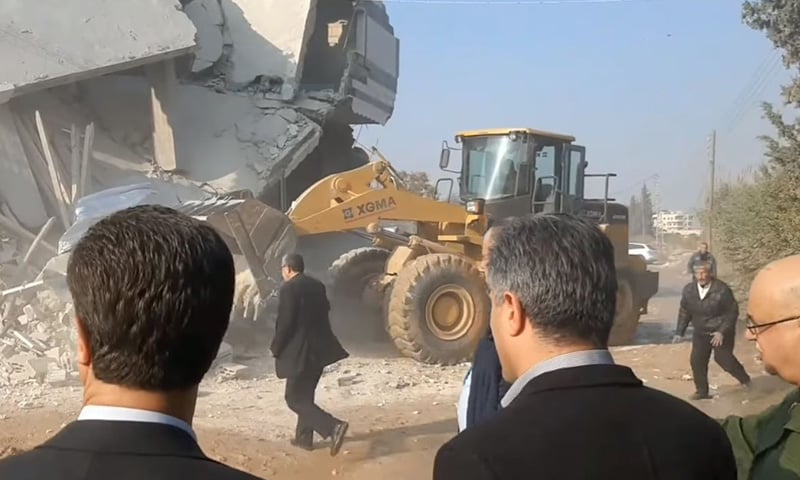 The Hama governorate in central Syria has many squatter settlements due to decades of stagnation in urban development of the city.

Extensive expropriation within the city of Hama in 1982 lacked media and human rights coverage, mostly due to the forced disappearance of many of those holding rights to the land during and after a military onslaught on the historic city center.

The Hama massacre occurred in February 1982 when the Syrian military besieged the town of Hama for 27 days to put down an uprising by the Muslim Brotherhood. Initial reports were that 1,000 were killed but subsequent investigations found that many more had been – perhaps even tens of thousands, according to some researchers.

It has been called one of deadliest acts by any Arab government against its own people in the modern Middle East.

The absence of documents and official decisions documenting the expropriation would seem to indicate that the Syrian regime wants to obscure this issue.

The excessive use of force during the military operations carried out by government forces in February 1982, with the aim of suppressing an armed uprising in the city of Hama, caused the destruction of some of its residential, commercial, and historical neighborhoods through intense bombardment after they showed resistance.

The areas that were completely destroyed included the neighborhoods of Al-Kilani, Ben Al-Hareen, Al-Zanbaqi, Al-Sharqiya and Al-Baroudia, which extended over large areas within the city center of Hama. Al-Kilani district was an archaeological district famous for its historical palaces.

After razing these neighborhoods, the government expropriated the land on which they had been built and prevented the remaining residents from reconstructing them. Those who stayed were told to move to their relatives’ homes to other neighborhoods but were not provided with alternative housing or compensation.

With continued population growth, all of the above caused a significant increase in the prices of real estate and apartments within the city. This prompted the residents to seek out alternative options, such as building “squatter settlements” on the outskirts of the city, which the Hama residents call Masha’a (in English: common land).

Government forces continued to seize neighborhoods until October 1986, when Cabinet Resolution No. 2462 was issued to expropriate the area based on Expropriation Decree No. 20 of 1983. This decision also affected dozens of undamaged properties within the city, located outside the destroyed neighborhoods, due to suspicions of anti-government political tendencies of the property owners.

Decree 20 gave all ministries, departments, and public institutions, including the Ministry of Defense, the right to expropriate private property in the public interest.

In addition to not specifying what the public benefit would be from expropriating the area, the decision to expropriate was delayed for four years after the destruction of those neighborhoods: it was only officially declared in 1986, whereas property had been expropriated starting in early 1982, giving the government forces enough time to loot the areas including ruins of archaeological value.

After the expropriation, the lands of the Al-Kilani neighborhood were used by public and political institutions including the Hama Police Command, the Baath Party branch, and the Apamea Hotel. Parts of the land of the neighborhoods between Al-Hareen, Al-Sharqiah, and Al-Baroudia were set aside for the Personal Status Department. The Postal Department, a street market, a school, a public bus station, and – after 2003 – a youth housing project were later added.

After Bashar Al-Assad’s first visit to the city of Hama, and in what was supposed to look like a late reconciliation with the city, he issued Decree No. 123 of 2000, which was published in the first part of Issue no. 32 of the Official Gazette in 2000. The decree stipulated a reversal of the decision to expropriate a few hundred real estates, which were then partially or completely expropriated and scattered across the city in areas that had not been built on. This encouraged many families to sue to recover their rights – overdue for some 18 years – including compensation for alternative property or housing.

With the start of the Syrian uprising in 2011, some of these squatter settlements served as gathering places for demonstrators and safe areas for defecting security personnel wanted by the authorities. The irregular nature of their buildings and the fact that the security forces were afraid of entering the areas, due to their population density and being open geographically towards the uprising-friendly countryside, was the reason behind their choice.

In 2012, after the government took full control of the city of Hama, the entire Al-Arba’een squatter settlement (estimated demolished area: 40 hectares) and Wadi Al-Joz (estimated demolished area: 10 hectares) were demolished, as they were not included in the city’s urban planning. The real goal behind the demolition was however, of a political and security nature as they severed as incubators˙ for the uprising. A woman from a neighborhood adjacent to Masha’a Al-Arba’een said: “After the demolition, the army came to our neighborhood and said through loudspeakers that they would destroy our neighborhood as they had destroyed Wadi Al-Jouz and Masha’a Al-Arba’een if a single bullet came from here.”

The Al-Arba’een squatter settlement, north of the Al-Arba’een neighborhood, extended for a distance of 3 kilometers along the northern entrance to Hama, and was considered one of the largest areas of the city as it was home to about 40,000 people who lived in one-floor houses, almost completely lacking services. The settlements were built on lands that were privately owned agricultural communes and were not included in official urban planning documents. The same applies to the Aleppo Road “Masha’a Tareek Halap” settlement, known as “Masha’a Wadi Al-Jawz”, north of the city in front of “Masaken Al-Daheriya”.

An owner of a house whose house was demolished said: “We saw bulldozers approaching our neighborhood but we stayed in our house because we did not imagine that they would destroy all the houses. After two days it was our turn. We left all our stuff. We were afraid to stay another minute because our house was shaking while bulldozers were destroying the nearby houses. The bulldozers approached our house, my husband came out to talk to the army soldiers. My husband was begging them to keep our house but they shouted: ‘We are going to tear it down, we are going to tear it down’. They did not explain to us what was happening.”

In September 2018, the Hama Governorate council decided, under the pretext of alleged violations, to demolish the entire Naqarna neighborhood in the southern part of Hama, including unauthorized buildings, and the area of ​​organized housing that had previously been set up by housing associations. The demolition lasted for an entire week. Masha’a Al-Naqarinah was built on agricultural lands that had been expropriated in 1983 for the benefit of the regime.

Abu Muhammad, 55, a citizen from Hama, said then that: “I had been waiting to own a home for 12 years. Yesterday, heavy machinery was digging the foundations and building, and today they are demolishing them.” When asked about what was going on, he was told that “the decision was taken by the government. The city council was ordered to completely demolish the neighborhood.” Abu Muhammad added: “This is how my dream was destroyed, the dream which I had been waiting for all these years, to own a shelter for my children, which I paid for the installments from my salary. I deprived myself and my family of many basic needs in order to achieve it.”  Abu Muhammad’s wife said all they had been dreaming of was “to drink a cup of coffee every morning on the balcony of our house overlooking the city’s neighborhoods”.

Abdul-Latif, a resident of the neighborhood, added: “More than half of those belonging to Wadi Al-Naqara squatter associations have left the city to the liberated areas or neighboring countries and they do not have the ability to return and defend their rights, because they will be arrested the moment they return.”

In contrast to the previously mentioned squatters, those in the Al-Tab and Al-Tayyar settlements – inhabited mostly by those loyal to the government and in which there are dozens of members of the National Defense Forces – have remained. The governorate and municipality of Hama ignored the demolition decisions in these two settlements and even built vital roads in them. These two settlements have witnessed urban expansion in recent years.

It is worth noting that one of the demands of the representatives of the population involved in protests in Hama after the outbreak of the Syrian uprising in 2011 was a reversal of Expropriation Decree No. 2462 for all real estate as well as compensation for the owners. This, of course, did not happen.

Last but not least on this issue is the decision by the Hama City Council to demolish 430 houses in the city and displace their inhabitants, especially cruel at this particular time amid a harsh winter. Parliament member Muhammad Abdul-Karim submitted a complaint before the People’s Assembly in its parliamentary session on December 16, in which he confirmed that the police and workers of Hama City Council were about to demolish 430 houses and leave their inhabitants without shelter.

MP Abdul-Karim explained that the reason for this demolition is to “reconstruct the surrounding wall of Hama University, which includes 1,600 dunums of expropriated land”.

Abdul Karim pointed out that the houses threatened with demolition are located on the edge of the wall of Hama University, which has not yet been completed. Those in charge of construction work in the university could shift the plans to 50 meters away to avoid the demolition of these houses, which have been confiscated at a price of 35 Syrian pounds per meter.

Those already displaced by the expropriation of land over the past few decades, however, currently see no way to get any sort of justice; many are simply struggling to survive.

Cover photo: The Governor of Hama while supervising the demolition of houses in Hama