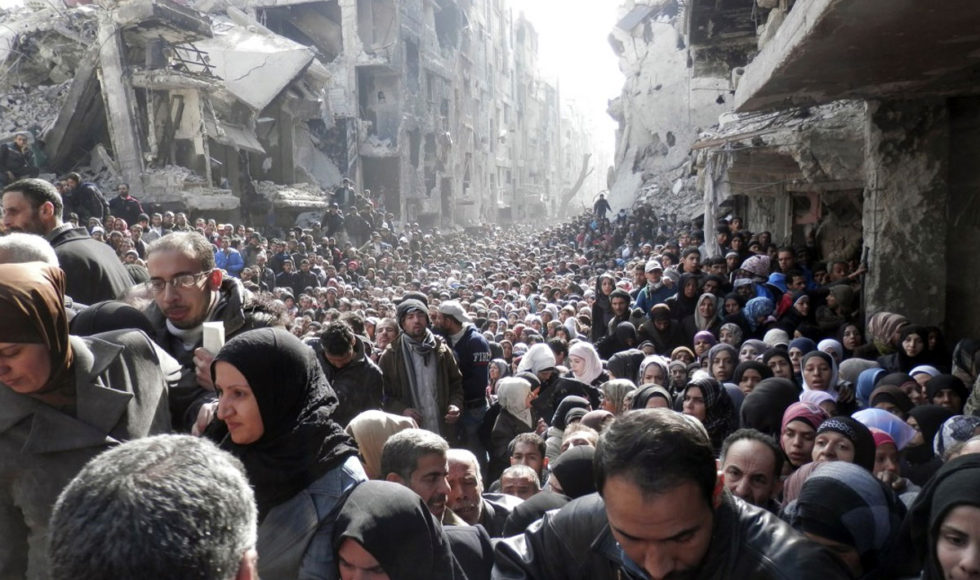 The Nakba, an exodus of more than 700 000 Palestinians who were forcibly displaced from their homes during the 1948 Palestine War, marks one of the largest waves of forced displacement in the history of the region. More than half of pre-war residents of Palestine were expelled by Israeli forces, which occupied their lands and to this day keep denying them the right to return. Many of the Palestinians who fled to Syria found shelter in the Yarmouk, which started as a camp but then over the years turned into a neighbourhood in the suburbs of Damascus, some nine kilometres from the capital. Ever since, the Yarmouk Camp has symbolised the fate of those who fell victim to forced displacement and reminded the world of the Right of Return, not only that of Palestinians, but of all the displaced people everywhere. It has been known as the capital of the Palestinian diaspora.

In 2012, another exodus began for the people of Yarmouk Camp when the Syrian regime air force launched relentless air attacks on the area. Throughout the war the camp was controlled by various factions, including ISIS. Fighting in the camp ended in 2018 when a ceasefire was reached between the regime forces and its Russian allies, and armed groups in the camp. This ceasefire marked a new phase of displacement for the Palestinian-Syrians in the camp. Now they were being displaced not by occupiers of their land but by the Syrian regime and its allies under the so-called “reconciliation agreements” that have brought no reconciliation, but instead revenge, more oppression and displacement. From the camp’s pre-war population of about 550,000 people, the population drastically dropped to 3000 people.

The proximity of Yarmouk to the capital made it significantly important for the regime, which has been trying to secure the area around Damascus and eliminate all traces of opposition from its surroundings. In early June, the Damascus Provincial Council approved Organizational Plan No. 105, which states that the camp would be divided and eventually annexed to the city of Damascus. As a result, the hopes of return for residents of Yarmouk have evaporated. This latest decree is designed to hamper the return of the displaced Palestinians and Syrians to the camp, thus further entrenching forced displacement, which for the large majority of the camp residents amounts to double displacement, particularly for Palestinians.

The damage is not only financial, but also sentimental, as the camp has a special meaning to its Palestinian residents, which seems to be an indirect target of the regime’s policy. According to the Action Group for Palestinians of Syria (AGPS), a London-based Palestinian human rights group operating in Syria, the new organizational chart indicates that major urban changes, of which some existed before the conflict in Syria, would be implemented, including the demolishing of streets and homes, with complete disregard of ownership or residence. This will lead to the erasing of any hope of return for the displaced.

AGPS explains that the Damascus governorate justifies its policies by the fact that the Palestinian residents of the camp owned what’s on the land, not the land itself, and therefore land ownership belongs to the state. According to this policy, the regime claims that it has the right to use the land, and property owners are not entitled to request any compensation.

In an interview with SACD, M.N., a former resident of Yarmouk camp who is currently displaced to Qudsaya, says that “only some 3000 people remain in the camp. We left eight years ago to save our lives when the violent bombardment by the regime air force started and we now rent a place in Qudsaya. I think that more than  60% of homes are destroyed.”

She added that today the regime controls the houses whose residents have been displaced. “The regime justifies it by arguing that the land is primarily owned by the Syrian government, and it has the right to confiscate it and take control of it. The regime forces and the militias loyal to it prevent the residents from returning to their homes with sandbags and military checkpoints at the entrances to the area.”

The sole aim of the maze of checkpoints seems to be to prevent the displaced from reaching their homes. Pictures leaked recently by activists show the regime forces looting civilian homes in a way similar to what happened in Idlib countryside, where entire homes were demolished to steal iron from the roofs of houses. M.N. stated that there are no services in the camp, as it suffers from years of power outages left unrepaired, there are no communication services or Internet, and the few people who live there rely on generators and water from underground wells.

“There is no material or financial compensation for the homes that the regime intends to demolish. Their goal is to eliminate the right of return for the Palestinian people, by preventing them from returning to the camp, chasing them in shelters and expelling them, in order to push them to completely leave Syria.”

The regime’s policy targeting Yarmouk not only prevents displaced people from returning to their homes, but is an element in the Assad’s strategy of demographic engineering, which is being implemented systematically in many areas of Syria. To the south of Yarmouk Camp is Sayyidah Zainab, an important Shia pilgrimage shrine, which has been used by Iranian and Iraqi militias as a base for their operations since the conflict in Syria began. The regime is keen on populating the areas around the capital with loyal residents and forces, both militarily and socially. Palestinian refugees clearly do not fall in this category in the regime’s perception, which drives its policies to institutionalize and cement their displacement and permanently alter the identity of the area.

The targeting on Palestinians does not end here. The Syrian regime began expelling displaced Palestinians residing in shelters in Damascus without presenting valid reasons. The regime’s military intelligence ordered the evacuation of displaced Palestinians in the UNRWA shelter known as VTC and an orphanage which was also used as a shelter in the Damascus neighbourhood of Al-Amin.

In the same vein, the Sawt al-Asimah website, which is specialized in news of Damascus and its countryside, reported that the Syrian regime forces began implementing their threats to expel the displaced families living in the schools of the town of Yalda, south of the capital, which were turned into shelters years ago. Sources from the Voice of the Capital said that patrols belonging to the Babila Police Department, and others belonging to the Military Security Detachment in Yalda, worked to evacuate the displaced families from the Yarmouk camp who resided in the shelters. The operation took place in the presence of the head of the municipal council and the mukhtar of Yalda.

Speaking to SACD under conditions of anonymity, M.S., a lawyer Damascus, explained that “since the regime forces and its allies took control of the Yarmouk camp the people were unable to reach their homes and properties to see what remains of the ruins there. Militias controlling the Yarmouk area prevented people from visiting, requesting a written permission from the military authorities to enter, which is impossible to obtain. All the while, they looted what remained in the camp.” The official explanation is “that the military forces is still searching for booby traps and weapons.” Some people, through bribes and personal connections, were able to obtain permission to visit their homes for several hours. “Most of the people were not allowed to carry anything but some of their memories and their luggage, others only had some pictures on their mobile phones.” He also added that “the infrastructure is destroyed, it can’t be used for housing, and it will be reorganized again. The Syrian regime took advantage of losing the control of Yarmouk in late 2012 to have the opportunity to completely destroy the camp, so that it can’t be rebuilt.”

“The regime’s announcement that the Yarmouk camp area is subject to Law No. 10 issued in 2018, shows the intention to reorganize the area again, similar to the areas of Mezzeh and Kafr Sousa and the areas of Eastern Ghouta. The governorate of Damascus issued the Organizational Plan for Yarmouk Camp No. 105, which is now considered as an official announcement to close the Yarmouk camp permanently, considering it merely a geographical area belonging to the Governorate of Damascus that will be organized and renamed without having any political specificity that takes into account the Palestinian presence and the Palestinian cause,” says M.S.

Yarmouk testifies to the fate of all displaced Syrians

The inevitable conclusion illuminates the reality in which the Syrian regime’s policies towards the Yarmouk Camp are yet  another manifestation of its oppression and systematic demographic engineering that it has implemented in many regions across Syria. The impact of these policies on the displaced Palestinians in Syria is particularly catastrophic. They have known Syria in general and Yarmouk in particular as home for decades, and their forced displacement from Yarmouk is no less devastating than the original displacement from their homeland.

Secondly, it also curtails the right of return for many displaced Syrians who were also living in Yarmouk. Using legislation such as Organisational Plan 105, the Syrian regime is actively denying people from returning to their homes and exacerbating the displacement crisis. Instead of these areas becoming safer for people to return to their homes, the new normal is permeated by arbitrary arrests and forced disappearance, legal anarchy and lack of safety and security.

The story of Yarmouk is a picture of the vulnerability of the displaced Syrians, who are at the mercy of the regime’s discriminatory and repressive policies. A day will come when the Syrian regime will be held accountable for its criminal conduct, including the systematic displacement. Until then, Yarmouk will serve to testify about the need for an internationally guaranteed and implemented political agreement which will guarantee the rights of all displaced Syrians and Palestinians alike.

*Cover photo: People of Yarmouk waiting for food during the siege (copyright UNRWA)