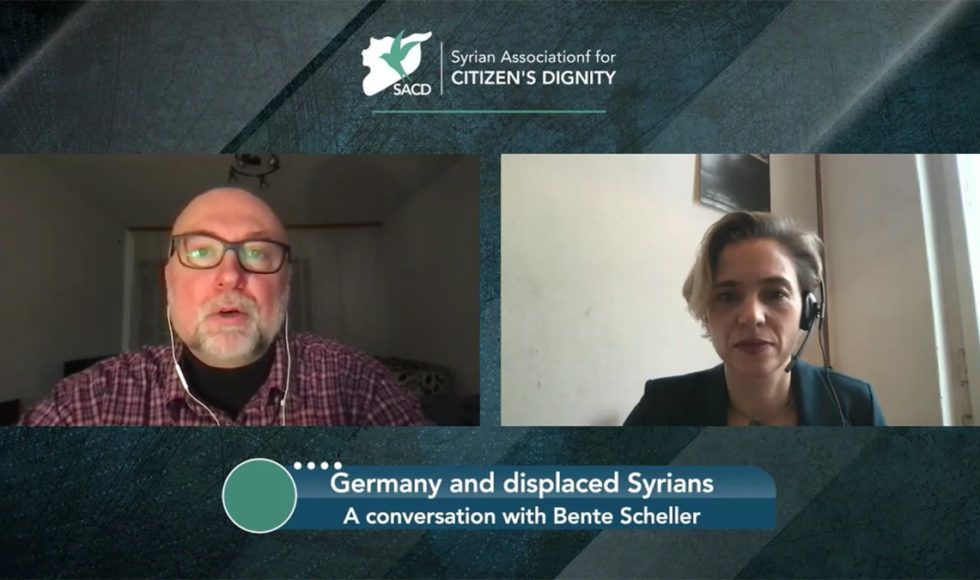 Germany is, for myriad reasons, a key state in the European Union whose policies significantly affect displaced Syrians, directly and indirectly. It is a host-country with the largest number of Syrian refugees in the EU, and, together with France, the country which decisively shapes the EU approach to Syria.

For this reason, we spoke to Bente Scheller, the Director of the Middle East section in the Heinrich Boell Foundation, who has served in the German embassy in Damascus between 2002-2004 and has written extensively on Syria and the political aspects of the crisis. In a rich, candid interview with Refik Hodzic, Dr. Scheller addressed a wide spectrum of issues, from the process of integration of Syrian refugees in Germany to the analysis of Germany’s vision for the safe and dignified return of displaced Syrians.

“For Syrian refugees, there is no real chance of return as long as Assad is there. This is the main reason why most left Syria, and therefore, as long as the regime in Syria does not change, how can they go back? We have lots of stories which make it clear that it is not safe for anybody to return to Syria because the regime does not know any mercy, there are no amnesties, no justice. There is nothing that would assure the people that it is safe to go back,” says Dr. Scheller, adding that Germany should not be thinking about returning Syrians who fled there. “I think that we cannot really talk about a perspective to resettle soon but I think for European states and states like Germany that are doing so well, why would we focus so much on return? I think integration should be the focus and seeing what can we do with people here who found refuge here. Why should we be so adamant in pushing them back? We should look at ways for keeping them here if they want to stay here.”

In the interview, Dr. Scheller comments on controversial statements on Syria made by Armin Laschet, a CDU leader widely seen as the possible successor to Angela Merkel. “This perspective [communicated by Laschet] is quite special because it was propaganda-fed, it is like speaking out on behalf of Assad. But I hope he can be more informed and with a more diverse base, his policy might be different, but that remains to be seen. We should not forget that he is a politician, and we don’t know if the things he says are based on lack of knowledge or whether it is politically calculated.”

Dr. Scheller believes Germany will remain steadfast in maintaining the EU position that a transition is a precondition for everything else in Syria, including reconstruction. But she recognizes Russia’s increasing efforts to shake that consensus and get the EU to normalize the Syrian regime and provide funds for reconstruction. “Russia has been pushing for changing that equation and saying let’s offer refugees a return to Syria in exchange for reconstruction money from the EU. We are lucky that the regime undermined that, because as soon as Russia offered this, the regime came with laws like Law No.10 and Decree No.66, which make it very difficult for the refugees to return because their properties could be confiscated. So, I think that the regime has crushed the Russian policies but that doesn’t mean that Russia is stopping. The Damascus conference was done on behalf of Russia because Russia knows that refugees return is a topic of discussion in many European countries. Russia is trying to win those countries over to see whether certain countries of the EU would normalize and send refugees back to Syria.”

On Merkel’s decision to welcome a million Syrian refugees:

There are many people who are not right-wing extremists, but they are very critical of this step. Chancellor Merkel has been criticized by many people in the political field for this decision. This is largely due to giving too much space to extremists, because they are so loud and vocal and aggressive that many people don’t dare to speak up to them and say, look, what you are saying is not really happening. The German economy thrived after the arrival of refugees here. It is something that might not be connected at all, but it was very clear that the impact is not negative on the German economy. Germany benefits [from such immigration], we have a shrinking population, less and less workforce and in some circles there always have been discussions that Germany needs to open up and welcome more people here. These people did not only want to come here to get privileges. No, they made something out of what they found here. They worked hard and they succeeded in schools and succeeded in universities. They established businesses here. This is not given much attention because as soon as there is an incident with somebody with a refugee background, like criminal incident or violence, it immediately takes the headlines and it is taken as an example to justify a more restrictive policy, whereas all success stories don’t make it into policymaking. Even those who are in favor [of immigration] are not speaking out too loud because they know that it might cost them votes.

On the campaign to have EU sanctions against the Syrian regime lifted:

Why don’t those who support the campaign to lift sanctions not ask for waivers and specific revisions and why don’t they wait for the Syrian regime to finally come up with a list of what exactly they lack to combat the humanitarian crisis that is developing? They have been asked time and again to provide a list of items that they claim are impossible to import and obtain under the Caesar Act and other sanctions. They have never responded, and if they provided lists, then [it would become clear that] none of the goods they mentioned were sanctioned. I would really hope that those who are trying to ease or lift sanctions, would really look into them and try to understand their impact, and not just listen to new wave calling for lifting the sanctions which really fails to understand the reasons of the suffering of the Syrian people. In the end, it is still the regime through which goods go, and humanitarian access is absolutely restricted. There is just one border crossing due to the Russian veto through which goods can come into Syria, and so the regime is controlling where the goods can go. This is what you need to consider when you look at why people are suffering and starving. If it is possible to import Apple iPhones, then how come it is not possible to import wheat and other goods?

On German MoI’s decision to deport Syrians accused of criminal acts back to Syria:

The Danish authorities were first in deciding this and it is different in Germany because there is a discrepancy between what foreign ministry says and what ministries of interior decided. The foreign ministry, in a report which was not public but has been quoted all along, has been stating that Syria is not safe and they have a very detailed view of what is happening in the different regions of Syria, and I think that they argue for what they see and what they learned from people on the ground. Whereas the Ministry of Interior argues on the basis of what is desirable for their internal politics, and of course, they are also looking at the upcoming elections. But the message is really strong, especially from the foreign ministry, that it is not safe anywhere in Syria, and that Syria is a state in which torture is common, where tens of thousands have died under torture in the past years alone. How can you send anyone back? This will be against German constitution and against any understanding of human rights.

One EU-Turkey agreement to keep refugees out of the EU:

I am very critical of the whole policy of trying to keep the refugees outside the European Union. Those violent images from Greece are devastating to see. This is not related to European values. The deal between EU and Turkey is a milder version but it opened the door for this. Refugees have the right to come here to seek asylum but if you cannot let people enter, then they won’t be able to fulfill this right. That’s highly problematic and the deal is a version in which European security policy is outsourced to Turkey on the back of refugees. It is not something easy to solve because at the same time, Turkey has already opened its border to a number of refugees. I think Europe should open its borders, but if it is not willing to do so, then I think it should support Turkey in enabling it to do so, otherwise people will be stuck in Syria, which is probably the worst of options. This has given Turkey the means to blackmail Europe, and in the consequence, it has even allowed Putin to push the EU with refugees because Russia knows it is a vulnerable point.

On Germany’s view of chances for a political solution:

I think that nobody would buy into the regime’s cosmetic reforms that it might offer one day. If we look at the core issues that would be necessary for return – that is a minimum of stability and security – for the regime, this is completely unacceptable. The regime lives on fear and it has to keep doing arbitrary decisions to keep the citizens afraid because it has over the past years been able to kill and displace the people. Thousands died and millions fled their homes. But still the people are demonstrating against the regime. And so the regime knows that there is no security for it any longer unless it continues its brutal, arbitrary persecution of citizens. We therefore have the complete opposite of what we need for return and what the regime has to offer. When we look at what should the regime offer, if we can’t have a release of detainees, information about the disappeared as a sincere measure of building confidence, as long as we see nothing is improving, we cannot normalize. The regime thinks it is entitled to have reconstruction money, entitled that people normalize with it, and it will always launch the next demand and never give anything in return. So, I think it is absolutely impossible to have a future Syria where Syrians can return and live in peace [with the regime in place]. I think transition is the starting point for a discussion about a constructive future for all Syrians and we are not yet there.

On the expectations from the Biden administration:

I think the Obama administration’s policy on Syria has laid the foundation for an approach that would in the long term go wrong. So, I’m not sure how much we should pin on these people who have long been familiar with the Syria portfolio as well as with the Middle East. We should not put too much hope into them having a new idea and approach, also because many of the possibilities they would have had don’t exist any longer in that form, so they can work on parts of the conflict and try to give it a more constructive spin but I’m not sure to what extent they want to reach a real solution.